One thing I will miss about summers is the relatively light traffic along Katipunan Avenue, which is where I pass through almost everyday between my home and workplace. There is still some congestion during the mid-day and the afternoons but these are typically due to truck traffic as Circumferential Road 5 (C5) is a truck route. During the rest of the year, however, with the exception of most weekends and holidays, severe congestion is experienced along Katipunan during the peak periods, particularly in the mornings between 6:30 AM and 7:30 AM. This is due primarily to the traffic generated by schools along Katipunan Avenue, most notably the Ateneo De Manila University and Miriam College. The following photos show typical traffic conditions along C5 during the peak periods.

Slow-moving vehicles along the northbound side of Katipunan Avenue 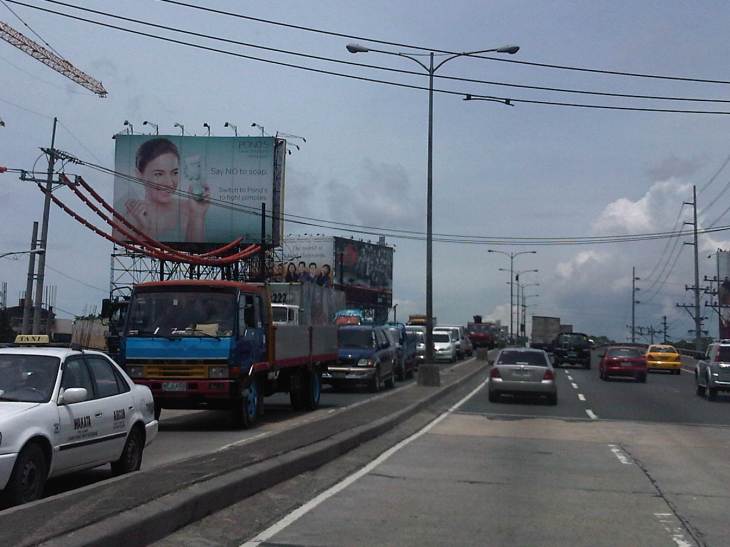 Congestion along the northbound direction of Katipunan atop the Aurora Blvd. overpass

Congestion along the Katipunan southbound service road leading to the U-turn slot underneath the Aurora Blvd. overpass

Traffic along the southbound service road leads to a U-turn slot under the overpass where many vehicles turn, heading in the general direction of Ateneo. Most turn here in order to enter the university via its Gate 1, which is the main access to the Grade School. On most times, congestion is caused by these vehicles turning right at Gate 1 as they effectively occupy the two lanes of the northbound service road and block all other traffic. This is shown in the following photo where it is clear that vehicles bound for Ateneo and turning at Gate 1 are the main cause of congestion. Beyond Gate 1, the traffic lanes are practically free of congestion.

The afternoon peak is exacerbated by traffic generated by these schools that lead to longer periods of congestion as the number of private vehicle traffic dramatically increases when there are classes between June and April. Meanwhile, there is a noticeable decrease in traffic during the weekends and holidays. Such phenomenon is mostly attributable to the trip generation characteristics of schools, and especially those that tend towards the generation of much private vehicles. Ateneo and Miriam along Katipunan are just two examples. The traffic they generate and the consequential congestion is replicated in other places as well, giving headaches to motorists and commuters passing along major roads affected by these schools. Ortigas Avenue, for example, is usually congested during the weekdays because of traffic generated by LaSalle Greenhills, and ADB Avenue at the Ortigas Center is usually congested due to traffic attributed to Poveda.