I finally had the opportunity to visit Davao City’ Traffic Management Center, a modern facility that serves as a command center for traffic management as well as for disaster response for what is arguably the largest city in terms of land area in the Philippines. The city is able to monitor traffic via CCTVs installed throughout its road network, particularly at intersections. This allows the city to also respond to incidents like road crashes and to call in police or emergency personnel for various concerns. Traffic signals are also controlled from this facility. Our visit to Davao was upon the invitation of the City Mayor, Hon. Sara Duterte, and we had a meeting with the City Planning and Development Coordinator, Mr. Roby Alabado, who was a faculty member of UP Mindanao and a very active public servant. With me was Dr. Ric Sigua, Professor at UP Diliman’s Institute of Civil Engineering and the current head of the Road Safety Research Laboratory of National Center for Transportation Studies. 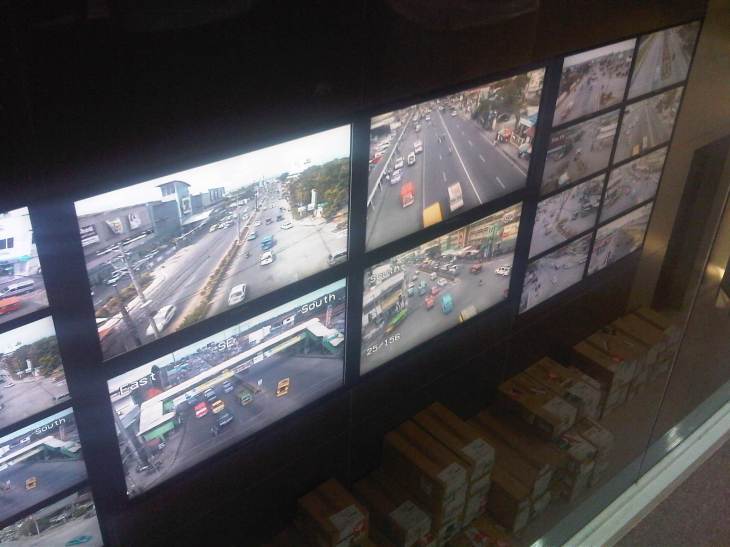 This is a view of the control center screen (actually comprised of several LCD screens) from the conference room of the TMC. Normally, there is a curtain screen covering the glass wall that they can raise in order to give people a view of the video screens.

Cameras installed around the city are high definition and can focus and provide clear shots of license plates.

Close-up of a taxi among other videos of areas being monitored. Cameras can also focus on particular people such as a driver trying to bribe himself out of a traffic ticket.

Videos, particularly those of incidents, are recorded and archived for future reference including reviews related to road crash investigations. Streets are well-lighted to allow for clear capture of incidents at night. In the photo, a truck is observed hitting a jeepney from the rear at an intersection with light traffic.

The aftermath of a road crash incident involving a truck and a jeepney shows the latter on its side.

Dr. Sigua being briefed by TMC staff about their capabilities.

Major cities in the Philippines should have similar facilities for traffic monitoring and management that could also be employed for other purposes as well. The latter may include incident detection, response and management such as emergency response for medical, fire or even security-related incidents. So far, I do know that Metro Manila has two such centers – one with the MMDA and another with Makati City. Cebu has one but it badly needs upgrading including the acquisition of CCTV cameras as they prepare to also upgrade their traffic signal system that was once the most sophisticated in the country.