The severe traffic congestion experienced along Ortigas Avenue Extension these days are due partly to civil works related to a water project. This is similar to works that were implemented along Marcos Highway that coincided with the road widening and drainage project along that Highway. Ortigas Ext. traffic is always bad during the weekdays due to the limited capacity of the road combined with the sheer volume of traffic it has to carry. The highway still serves as the primary artery connecting the populous and progressive towns of Rizal Province to Metro Manila. These include Antipolo City and the towns of Cainta, Taytay, Binangonan and Angono. I’ve written a piece about traffic along Ortigas Ext. as well as the management schemes that have been employed to address peak period congestion including allowing counterflow traffic on weekday mornings. Following are a few more observations and assessments

Civil  works in the middle of Ortigas Ave. Ext. in the De Castro Subdivision area – road capacity is substantially reduced along significant sections of the road due to waterworks project. Both eastbound and westbound traffic are affected as one lane each are taken up by the project. Traffic flow will surely improve once the project is completed, automatically adding two lanes (one for either direction) to increase capacity. 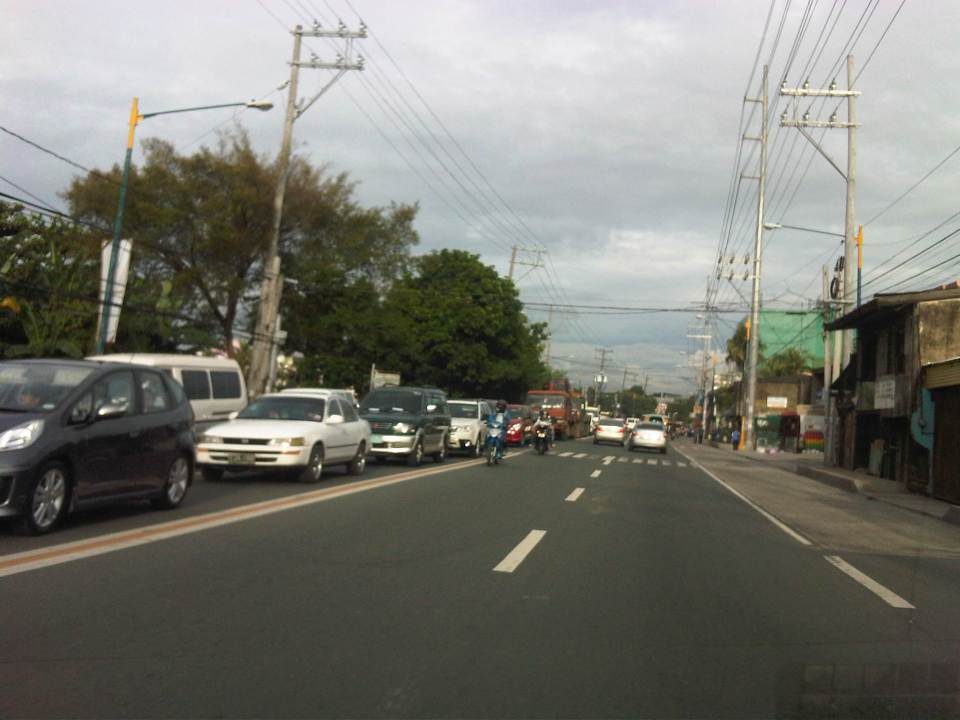 Sunday jam – I can only imagine how bad traffic congestion can be during the weekdays. The photo above is one I took on a Sunday afternoon showing congestion along the westbound direction typically associated with peak period traffic on weekdays. Meanwhile, traffic is practically free flowing on the eastbound side once you get past the work area across De Castro. I was a little surprised about the discipline of drivers considering only few (mostly motorcycles) dared to counterflow. 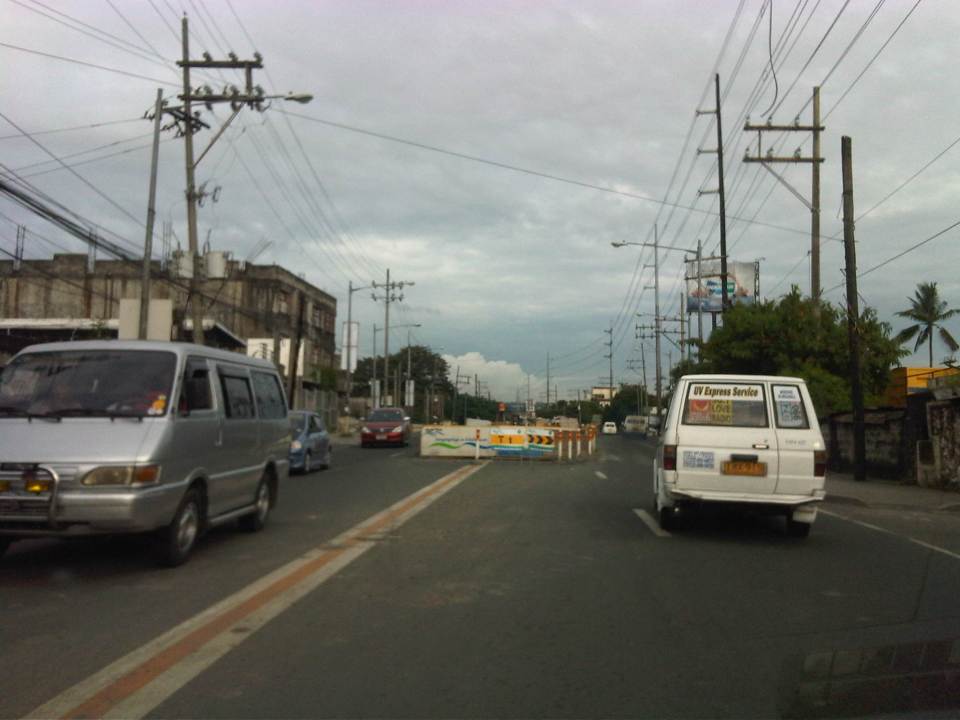 More diggings – this time 2 lanes are taken away from the wide section of Ortigas stretching from across the former Riverside Mills to the BF Metal Corp. This is where vehicles usually make U-turns because of the space available for vehicles making such maneuvers that are no longer allowed during most periods past the vicinity of Cainta Junction.

Approach to Cainta Junction – this is probably one of the most congestion or saturated intersections outside Metro Manila. Most traffic though can be attributed to Metro Manila as most vehicles are either bound for MM or are coming from it. At this Junction, Ortigas Ext. meets Imelda Ave. (formerly known also as Francisco Felix Ave.), which continues as A. Bonifacio Ave. as it extends to towards Cainta town proper. Ortigas Ext. from the eastbound approach has only 2 lanes (another 2 on the opposing direction) widening to 5 (additional lane for right turning traffic to Cainta) at the entry. Meanwhile the westbound approach from Antipolo/Taytay also has 3 lanes with one dedicated to right turning traffic, which is significant due to left turns being disallowed from the eastbound approach towards Imelda Ave. Vehicles now go through Ortigas and take a U-turn after the junction and then turn right to Imelda. At the median opening, Ortigas has been widened to allow for such maneuvers.

Cainta traffic and the MMDA has been experimenting on a number of schemes for the signalized junction. One proposal that has been on the shelf for quite some time now is for an overpass to be constructed along Ortigas to allow for continuous traffic flow along the highway. So far, there just seems to be not enough space for an overpass to be constructed and some quarters are saying that the only way to improve traffic really is to widen Ortigas to something like Marcos Highway on the other end of Imelda Ave. Such propositions could have been averted if a mass transit system was constructed along this corridor when congestion was just starting to set-in. Actually, history tells us that there was a mass transit system before with trains running regularly between Manila and Antipolo. But that is a topic we’ll reserve for another post. Abangan!

This post is a continuation of recent ones featuring pedestrian overpasses along major roads. These past posts include facilities along Commonwealth Avenue and Espana Boulevard. This time we take a look at similar facilities along Ortigas Avenue Extension, which stretches from C5 to Kaytikling Junction in Taytay, Rizal. Following is a photo journal of overpasses from Rosario until Cainta Junction.

Concrete overpass at Rosario as viewed along Ortigas Ave. eastbound – it appears to be newly repainted but the design suggests it is an older structure of the more traditional design. There used to be no overpass here despite the volume of pedestrians crossing the street due in part to the Sto. Rosario Church on the left side of the road. At-grade crossings are still common with many jaywalkers hurdling/jumping over the concrete barriers. 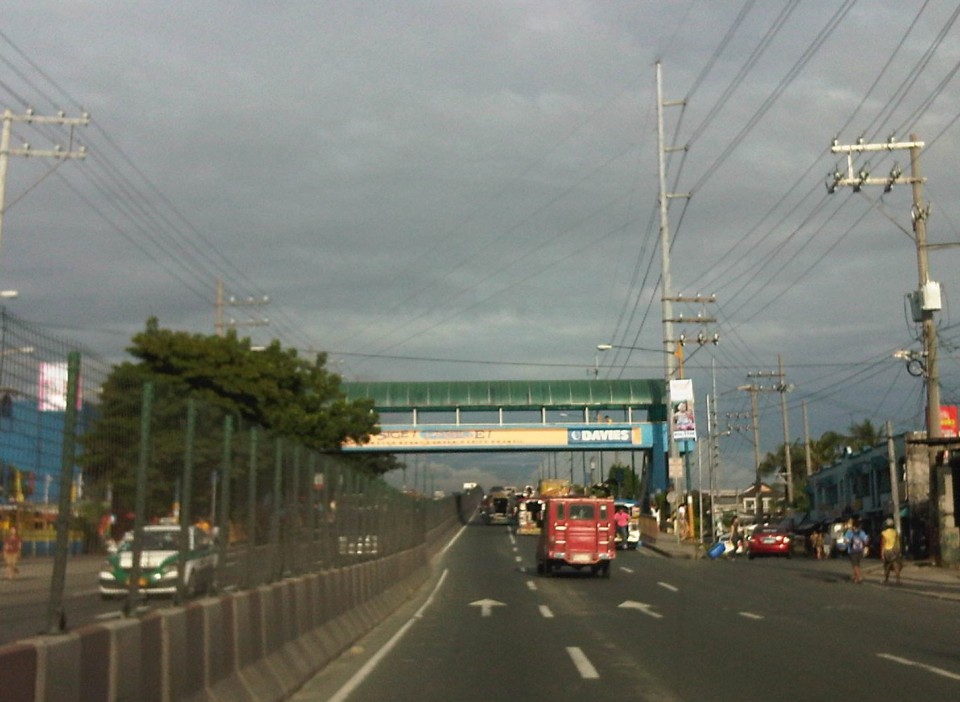 Overpass at the approach ramp to the Manggahan Bridge – seen from Ortigas eastbound, this is one of two overpasses found at either ends of the bridge crossing the Manggahan Floodway. There is a service road on either side Ortigas just beside the overpass that serves as access to the the West Service Road along the floodway.

Second overpass at the exit ramp right after the Manggahan bridge – as viewed from Ortigas eastbound, the facility is similar to one found along C5. The steel structure comes across as a rather odd design that I’m sure my architect friends would have their own opinions about. As far as I am concerned, I think there’s just too much steel and is unnecessary though it can be claimed for aesthetics by the designer. Perhaps I am too concerned with functionality and safety rather than beauty? 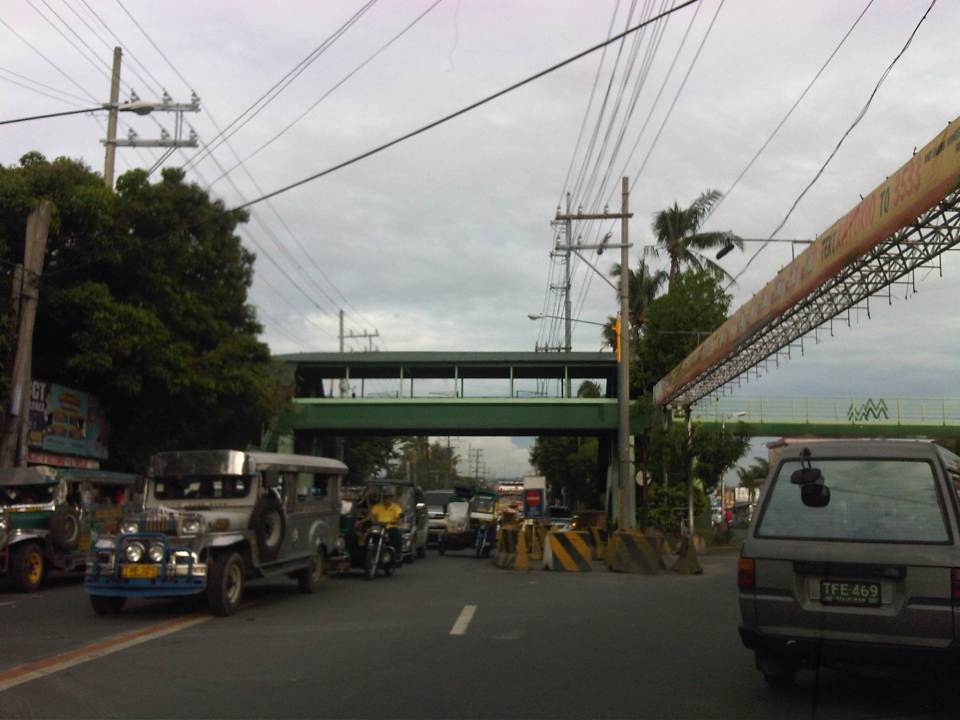 Overpass across Ever mall – the covered section of the overpass is concrete and similar to the Rosario overpass. The extension of the overpass is visible from this photo at the right side just above the minivan, and has the distinctive mark of the MMDA (the double M seen in the photo). The extension is a steel structure like most of the newer facilities constructed during the time of BF that allows pedestrians to walk overhead and straight to the mall. This section of Ortigas is quite unusual as outbound (MM-bound) traffic occupy all lanes of Ortigas at this area. Inbound (Rizal-bound) traffic are diverted towards a stretch fronting the mall that appears like a bypass road. Traffic eventually re-enters Ortigas right after the mall.

Overpass across Cainta Public Market and Robinsons Cainta – this is a concrete structure that is covered and, surprisingly, is clear of vendors thanks to the efforts of Cainta enforcers and the mall security. The public market side (left side of the photo) is too crowded with the pedestrian immediately encountering informal vendors’ stalls upon descending the stairs. While there are no vendors atop the overpass, there are many tambays loitering about and the usual beggar sitting anywhere about the structure (usually at stairs along the public market side). The facility extends all the way towards the mall, which can be accessed via its second level.