The outbound approach to the bridge along Marcos Highway was quite congested this morning due to the closure of the underpass leading to C5 located just in front of SM City Marikina. The section was closed to traffic due to flooding caused by Typhoon Pedring (International name: Nesat). Pedring’s rains caused the Marikina River to swell up and inundate significant areas along its banks including what looked like the lower level parking area of the mall. Traffic bound for C5 from Marikina, Pasig and the towns of Rizal had to be diverted to the Riverbanks road  via the service road after the bridge. The result was traffic congestion as 6 lanes of traffic tried to squeeze into what was effectively 4 lanes of bridge including the bypass structure fronting SM that eventually merges into 3 lanes of road on the other end.

Following are a few photos I took while en route to the office this morning:

A gate bars access to the underpass connecting to a bridge leading to C5. The sign on the right states: “Roadway subject to FLOODING,” and is a permanent sign placed there to condition the mind of travelers about what may happen should there be inclement weather. This is supposed to be an example of a design where there’s no choice but to sacrifice according to the character of the area. Still, the question on many people’s minds probably is why were other designs that won’t be subject to flooding considered in the first place? Such would surely be worth it considering the frequency our climate and the probability of flooding?

Mud and muddy water on the underpass as seen from the bridge. Such is a scene reminiscent of the aftermath of Ondoy (International name: Ketsana) in 2009, exactly 2 years ago to the day. 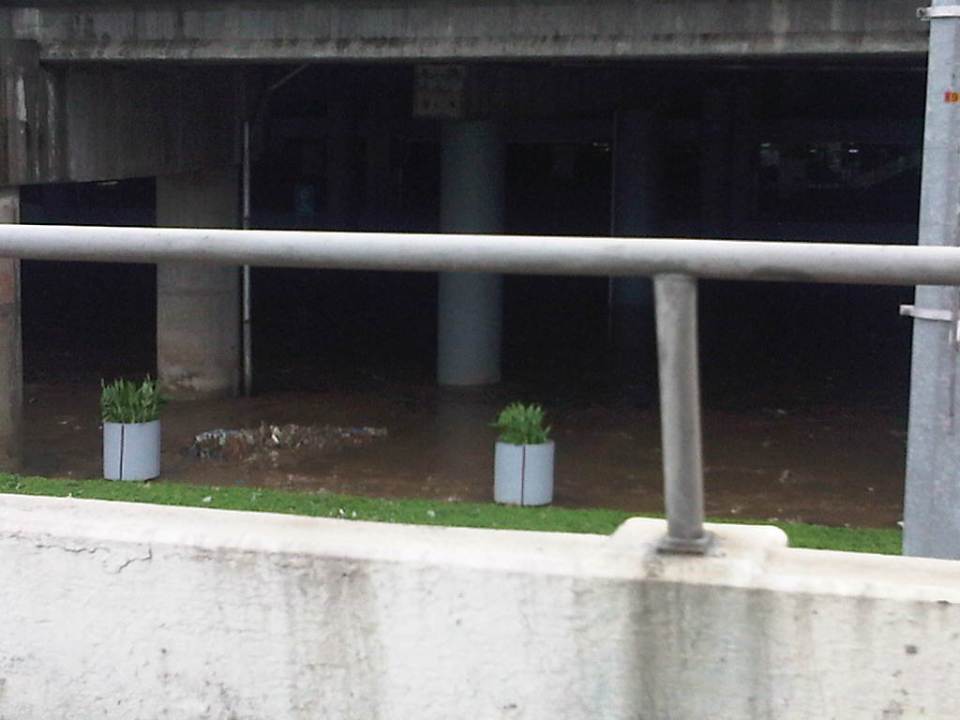 A peek into SM Marikina’s lower level environs show thick mud that settled on the service road and the mall’s lower parking area. The mall’s design already factored the anticipation of floods brought about by the swelling of the river during powerful typhoons such as Pedring and Ondoy. The mall was, after all, constructed on the flood plain, which is an unusual and uncommon location for such developments.

Garbage comprising mainly of plastic trapped on the SM screen fence. These were part of the flotsam and jetsam from the Marikina River. Such debris are evidence of the state of waste disposal and mismanagement in areas along the Marikina River. It is clear that people still have not learned from past experiences and government is partly to blame for this, particularly at the local level.