After my talk at the Ateneo De Naga, we went around the city to have a look at its roads and transport. As we had already seen the previous day that there were motorized trolleys in that city, we made it a point to visit one informal terminal located at a junction. The following photos are a documentation of our taking a closer look at informal rail transport in the Philippines. 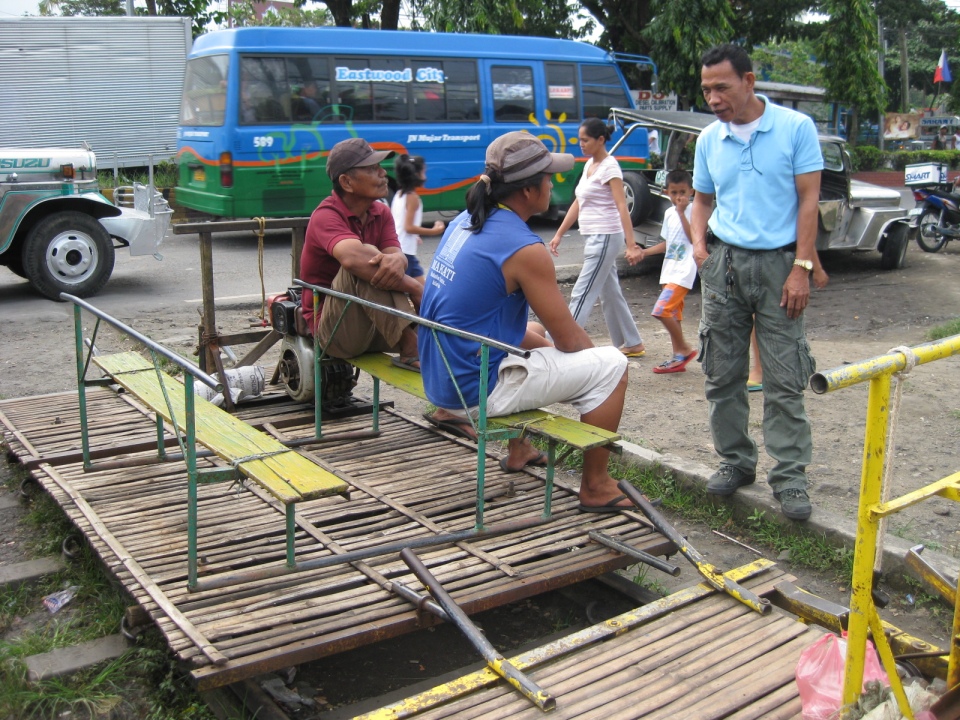 Taking a closer look at the motorized trolleys of Naga City – our driver Roy speaks to two drivers/operators of the trolleys to ask them about operations. The trolleys are not so much different from the one we saw along the road while traveling through the towns of Quezon Province and certainly look like their relatives in Manila. They are made of light but sturdy bamboo with the occasional metal parts and some have makeshift couplers in case two or three are connected to form trains! The trolleys even have benches to allow for a few seated passengers.

Passenger mix – the trolley service is popular to different users including students and laborers. They are cheap and the most practical (direct) mode of transport to their home, which are located along the railway line. Note the concrete ties for the tracks, indicative that this section has already undergone rehabilitation in the past when the old wooden sleepers were replaced by concrete ties. 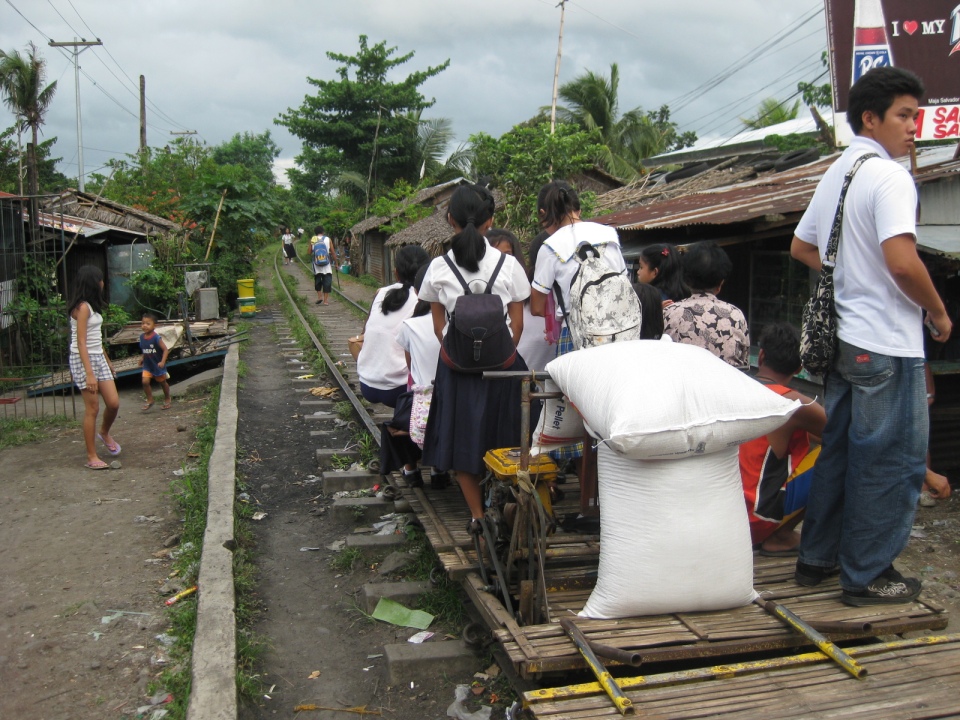 Informal freight transport – goods like rice and flour are also transported using the trolleys. I assume there are also stores in communities along the tracks and that the most convenient way of transporting commodities (paninda) would be via this mode.

Motor power – while most if not all the trolleys in Manila are human-powered (partly because they should be light enough to lift in case trains do come given the increasing frequency of PNR commuter line services), the Naga trolleys use motors similar to that being used by boats.

Driving wheel – while trains may be powered by locomotives, the trolleys have motors typically used by pumpboats and by the tricyboats found in the Visayas and Mindanao (tricycles powered by the same motors). The driving wheel is connected to the motor to move the vehicle and the contraption on the lower right and just beside the driving wheel is the brake mechanism. Thus, the driver is usually positioned just behind the motor where he has access to both the motor and the brakes. 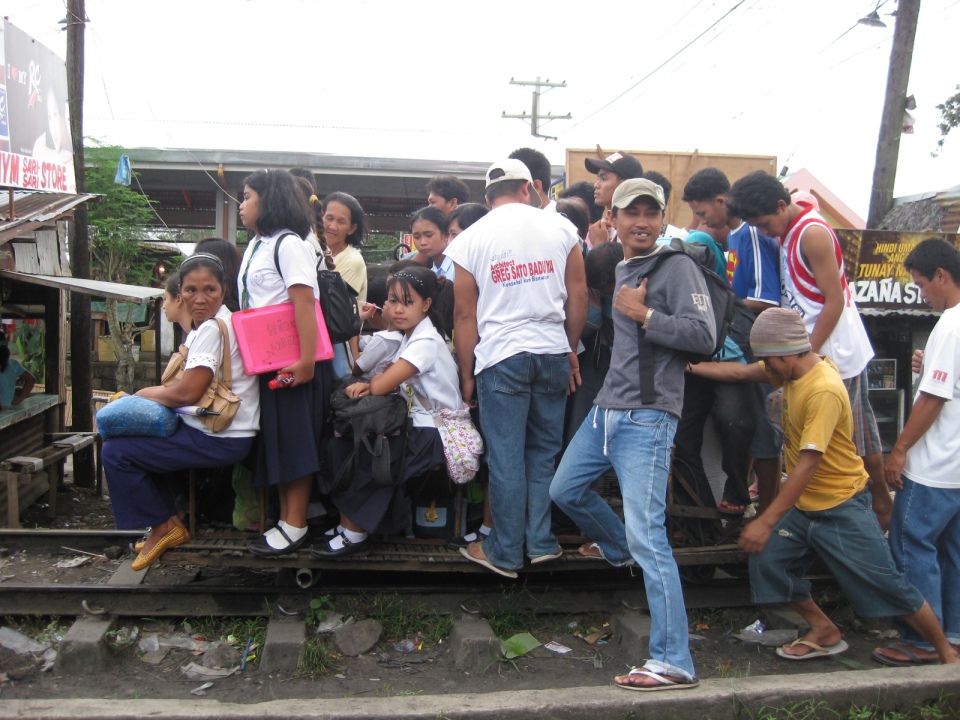 Fully loaded – a single trolley can carry as many as 25 passengers depending on their weight and size (more if there are many children in the mix). I think there are about 24 passengers on this trolley about to depart from the informal terminal. 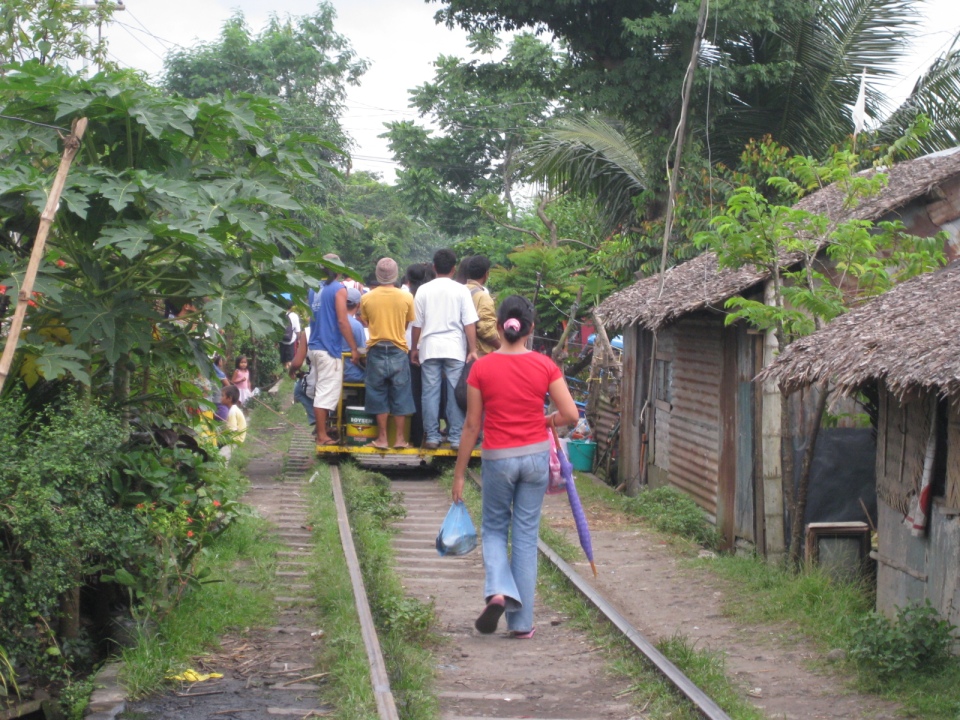 Off they go – with a full load and each person paying 10 pesos for the ride, the driver can earn about 200 pesos for one run or 400 for a roundtrip. Operating costs are quite simple including fuel and maintenance costs. On a typical busy day, a driver can have about 5 round-trips. Note how close houses are to the railway tracks.

Next in line – the driver of the next trolley positions his vehicle and waits for passengers. We estimated it took something like 15 to 20 minutes to get a full load during the afternoon peak period when we were at the informal terminal. It would probably be longer during the off-peak periods. 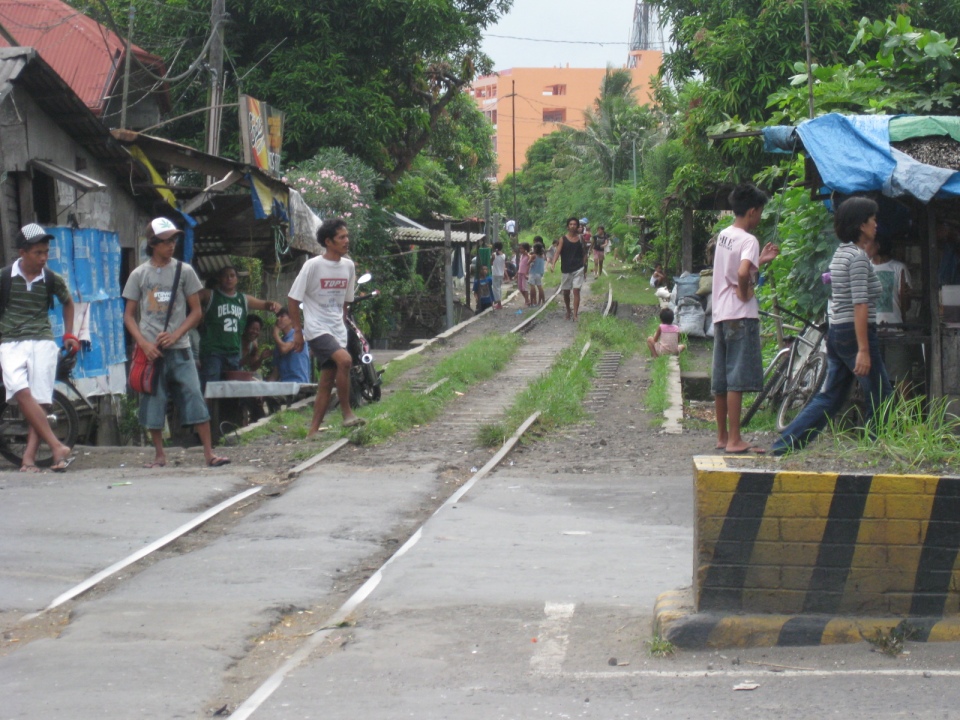 A view of the tracks on the other side of the road – we learned that the area along the tracks is not served by the trolleys.

I can imagine that with the resumption of the Bicol Express service between Manila and Naga City, the people operating the trolleys would eventually have to deal with more frequent arrival of trains. Currently, the PNR services would probably pass through the trolleys’ service areas during the night-time so there will be very limited conflict at present. However, further rehabilitation of the Main Line South and the resumption of services all the way to Legaspi City should already serve as a notice to informal rail transport and the concerned local governments that the days of the trolleys are numbered.