Davao’s international airport and some comments on Philippine airports

November 11, 2011 2:02 am / 1 Comment on Davao’s international airport and some comments on Philippine airports

Mactan is the gateway to the central Philippines and is second to Manila in terms of international flights. The number of domestic flights flying in and out of Cebu is comparable to Manila considering that Cebu connects to many destinations in Mindanao (southern Philippines) that does not have flights linking to Manila. Davao is the gateway to the south and handles international flights, mostly via budget airlines, from Indonesia, Malaysia and Singapore. Clark or DMIA is the former US airbase and has already overtaken Davao in terms of the number of international flights handled. It is always mentioned as a possible replacement for NAIA as the primary international airport for the country, with discussions comparing NAIA-DMIA to Haneda-Narita. Of course, DMIA will require a much larger terminal to be able to handle the number of passengers who are expected to use the airport should it become the main gateway. And, there should be a good transport system linking the National Capital Region with Clark, which also should be like the transport systems making Narita accessible (e.g., Narita Express trains, limousine bus services, etc.).

The pre-departure area of the airport is also spacious and should be sufficient for the projected demand for the airport. The area is squeaky clean, well-lighted and the staff are respectful and efficient.

Check-in counters of the various local airlines are sufficient in number. All local airlines operate from Davao, which is the top destination in the southern Philippine island of Mindanao. Davao is actually the largest city in the Philippines in terms of land area. 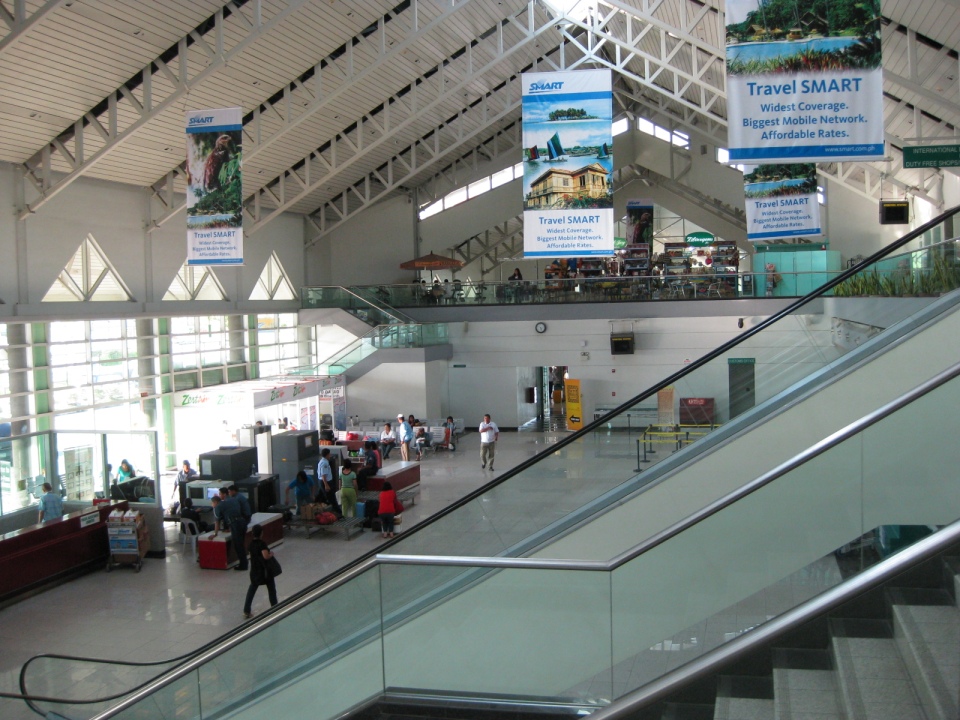 Up the stairs – the escalators are functioning and the so are the other facilities in the terminal. The comfort rooms are clean and larger than many other airports including NAIA T1 and T2. 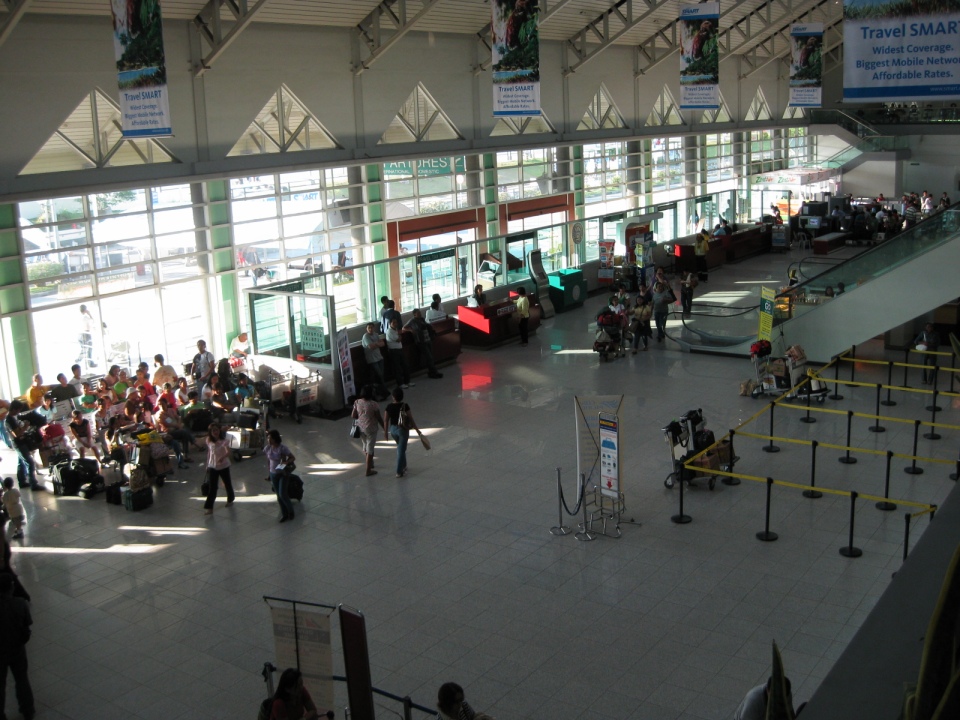 The spacious pre-departure area is sufficient for the number passengers typically handled by the airport particularly for domestic operations (There aren’t so many international flights.). Nevertheless, the area could use more benches considering the number of waiting passengers. The well-wishers’ area outside the terminal doesn’t have much furniture. Perhaps this is to discourage loitering or tambays in the airport terminal’s premises? These are understandably among the security concerns that the airport officials addressed with memories of the Davao airport (the old one) bombing a number of years ago.

There are many concessionaires inside the airport but some of them appear more like tiangge or informal. There is a booth where people can purchase vacuum-packed seafoods that can be taken as carry-on (if not purchased in large quantities). All the other shops sell pasalubong with the typical food items and crafts Davao is known for. That includes fruits like suha (pomelo) and mangosteen. There is, of course, durian being sold and you can even buy them vacuum-packed so you can take them in the plane. Fresh durian is not allowed as carry-on for obvious reasons – the scent.

There are a couple of coffee shops inside the airport but they don’t seem to be as attractive as the ones in Bacolod, Cebu or Iloilo. Nevertheless, they are good enough for hungry stomachs or thirsty throats. I am not including photos taken at one coffee shop as they show some colleagues joking around. 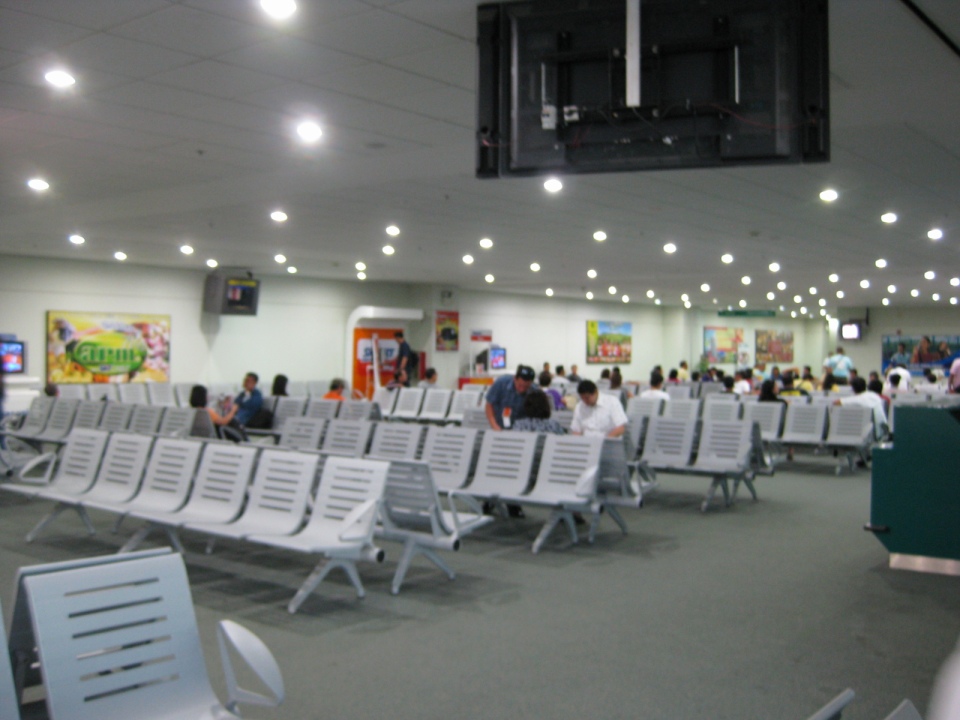 Departure area – the guy in the white barong is a distinguished gentleman from Mindanao who seem to prefer the spacious departure area from the VIP lounge usually reserved for people of his stature (good form sir!). Conferring with his staff, his being comfortable here seems to indicate that the area is good enough for everyone else including those who might think they deserve better.

The airbridge is extendable and should be able to handle wide-bodied aircraft like the A330’s that PAL usually deploys to Davao. The city generates much air traffic passengers considering it is a major tourist and business destination in the country.

The scenes above of Davao’s international airport gives us hope that we can actually have decent terminal facilities. The floors of the terminal are so clean that I’m sure anyone blogging about this would agree they are worthy of “sleeping on.” The same goes with the Bacolod-Silay airport that I wrote about in the previous post and other airports that have been upgraded if not recently constructed or relocated. It’s not too late for NAIA’s terminals but the government should really pour some resources into it and perhaps take the cue from people who have offered their services pro bono in order to address the state of the terminals, especially T1. But then again, I would like to see the government finally make a firm stand, a commitment, regarding the futures of NAIA and DMIA. Alin ba talaga ang gusto nating maging premier gateway? And note that DMIA is indeed strategic and has enough space for expansion but will require a larger, modern passenger terminal to handle traffic that is currently flying in and out of NAIA, and more in the future.