Another what if: Rapid Transit Railway for Metro Manila

I posted a map on my FaceBook page showing the lines of a railway network for Metro Manila proposed about 40 years ago. The map, which I reproduce below, was produced from the original featured in the Final Report of the Urban Transport Study in Manila Metropolitan Area (UTSMMA) that was completed in September 1973. To enhance the image, I traced the lines and provided some color. I also indicated the intersections among the lines that are potentially common stations for the network. The study was funded by what was then the Overseas Technical Cooperation Agency of Japan, the predecessor of the Japan International Cooperation Agency (JICA). The study recommended for a Rapid Transit Railway (RTR) system for Manila. 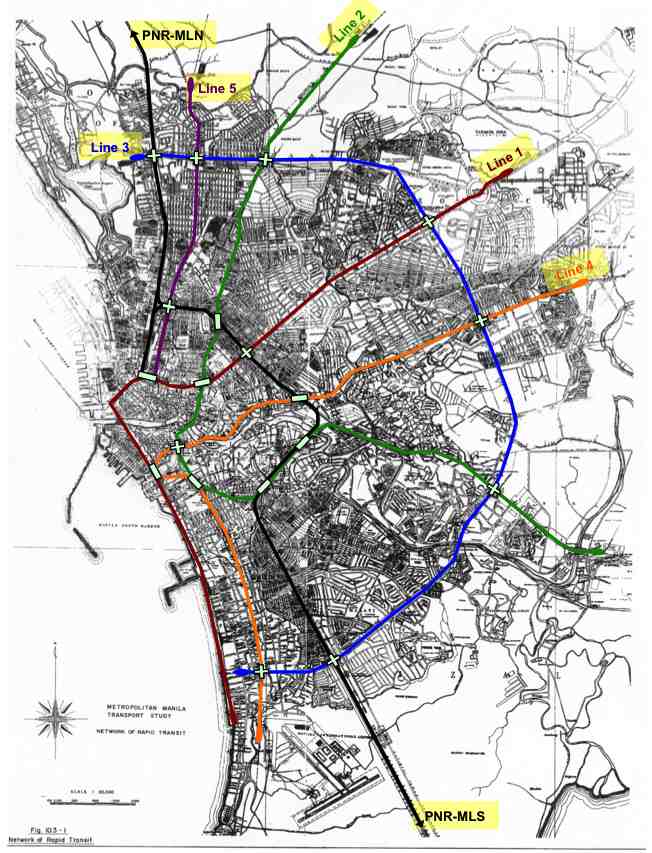 The main routes of a mass transit system was recommended by UTSMMA  to be restricted to railways in the form of subways in the inner area bound by what was then called Highway 54 (C-4 or EDSA) and elevated trains outside in the suburban areas. The study recognized the important roles of buses and jeepneys while recommending that these serve feeder routes once the railways were completed. Following are descriptions of the Lines including their lengths:

Curiously, a Feasibility Study for Line 1 was completed in June 1976 but unfortunately (or tragically) plans for the implementation of the network were apparently scuttled after a subsequent study that included a land use component. This was the Metro Manila Transport, Land Use and Development Study (MMETROPLAN) that was completed in February 1977, which came up with the following assessment:

“Heavy Rapid Transit (HRT) would provide public transport passengers with much faster journey, but by 1990 would attract only 2.5% of motorists and would have negligible impact on traffic congestion. Partly because of this and partly because of its very high capital cost, it would be hopelessly uneconomic: the annualized capital costs would be higher than the estimated benefits in 1990…passenger flows are not high enough to exploit its full capacity…and the large savings in time for public transport passengers are not given a high value in Manila, and are not high enough to persuade motorists to change mode.

These results are conclusive , and are unlikely to be changed by any circumstances or reasonable assumptions…it is clear that any other fully segregated public transport system, whether light rail or busway, would also be uneconomic. As such systems would require the appropriation of most, if not all, of the available funds for all transport (including highways) in Metro Manila for the foreseeable future, and as there is not other rationale for their implementation, they have been rejected from further consideration.” (MMETROPLAN, Final Report, 1977)

Looking back and then making a rapid assessment of what is now Mega Manila, we now know that this conclusion in 1977 was so off the mark. Further, the assumptions then that included restricted development in areas such as the Marikina Valley were not realized; resulting in a sprawl and population distribution that pretty much requires the RTR system recommended in 1973. We also now know that such a system could have been a game changer in terms of how we commute and how lands were developed along those transit corridors. I would even be brave enough to state that a subway system could have forced us to invest in a comprehensive drainage system to prevent flooding that could also have had tremendous benefits now in these times of Ondoy and Habagat with heavy rains often wreaking havoc on Metro Manila.