I was lucky to be able to take a couple of photos as our vehicle passed along Marcos Highway to be able to capture images of people walking along the sidewalks between Ligaya and De la Paz. The driver maintained his position along the right side of the road so I had a good view of the pedestrians and cyclists making their way from Ligaya in the general direction of De la Paz and the two shopping malls downstream (the signs of one mall are visible in the photo).

Ligaya is a transfer point for people traveling to and from Pasig, Pateros and Marikina who use the jeepneys connecting these towns. They typically get off at the junction of Marcos Highway and Amang Rodriguez. From here, one can take a jeepney to the towns of Rizal or perhaps to Quezon City (Cubao). These days, however, it is not so easy to get a ride at Ligaya and one cause of congestion emanating from the junction are people taking two lanes of the road as they position themselves to board stopping jeepneys. Instead of waiting for the jeepneys and whatever limited seats are available, many people have decided to walk towards the junction with Imelda Avenue. There located are commercial establishments including two shopping malls and the terminals of public transport whose routes terminate at the area. There, it is relatively easier to get a ride home though during the early evenings it can also be difficult to get a ride to the Masinag and Cogeo districts of Antipolo (And that’s part of the reasons why the LRT Line 2 extension is necessary!). 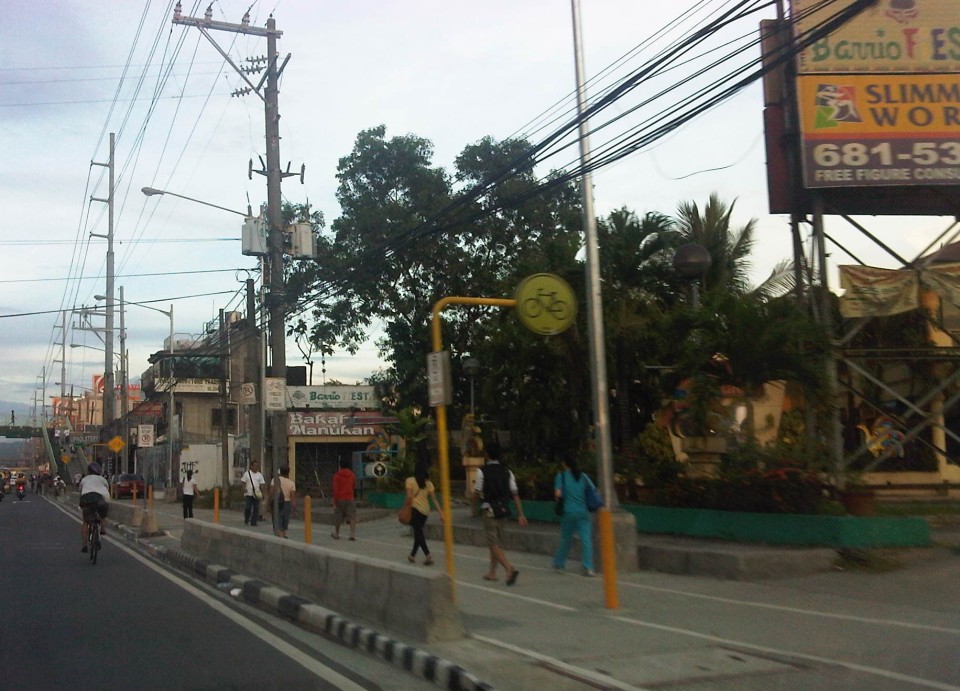 Pedestrians walking towards De la Paz or the shopping malls a little further on. There is actually a bicycle lane beside the pedestrian walk similar to how the Marikina Bikeways were designed but most cyclists opt to use the curbside lane of Marcos Highway.

Pedestrians walking from Ligaya include workers and students.

The walkways are generally clean and well-lit during the night time, though I think portions are still quite dark. I also think the more people opting to walk means it can be safer to walk (strength in numbers?). The observation that many people walk encourages other people to do so, and is a deterrent for unlawful elements of society. Perhaps to further reinforce the safety and security aspect of walking, Pasig Police or the MMDA could have some of their personnel walk along this path. Police visibility here, especially at night, would help deter muggers and hold-uppers who might see the pedestrians as potential victims.