I took a couple of photos one  late afternoon on a weekday on my way home. I wanted to have a picture of typical jeepney overloading during the afternoon peak. Typically, jeepneys would allow “sabit” or passengers hanging from behind the jeepney. This practice is actually prohibited and carries a fine if jeepney drivers are apprehended. And that is usually a big “if” considering enforcers turn a blind eye to the practice especially during peak periods when it is difficult to get a ride.

I also happened upon an opportunity to take a photo of the overloaded jeepney together with pedestrians walking along the walkway at the roadside. Though the photo was not so clear, it captured the image I wanted with people opting to walk while others took a risky ride on a jeepney. The cyclists in the photos were just bonuses and added to the visual of alternatives for mobility. 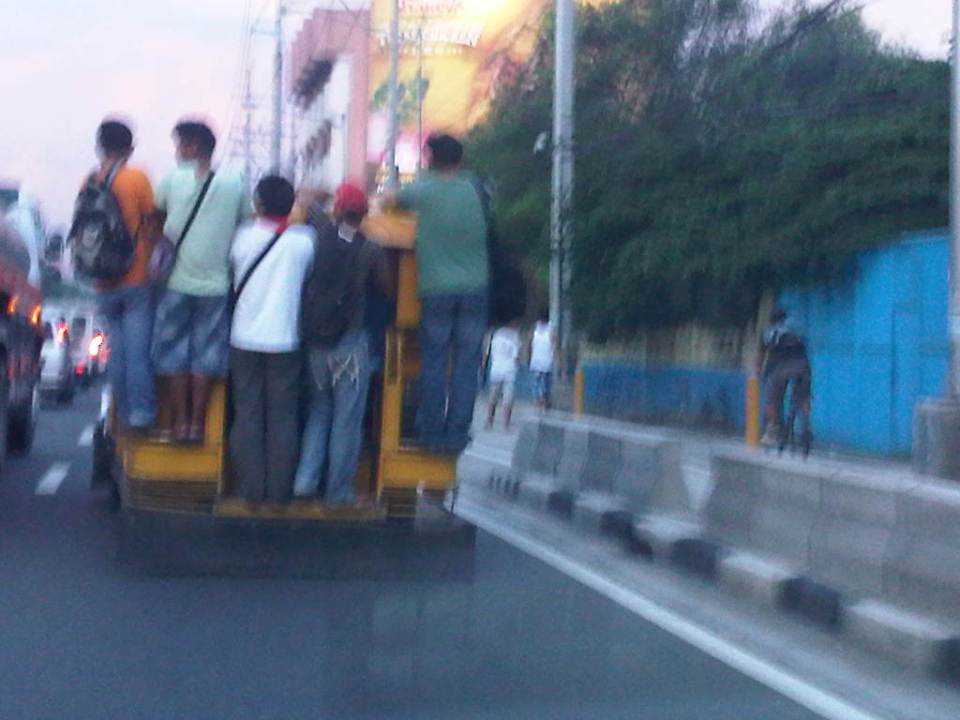 Walking remains as the mode of transport with the highest share when all modes, motorized or non-motorized, are compared. While there is a strong clamor from cyclists for bikeways and for cycling to be taken up by more people as an option for commuting, the reality is that cycling is not really for everyone. It is a viable and healthy mode but should also fit in a hierarchy of modes. Most people walk and walking should be encouraged over distances where it is most suitable. Facilities for walking need to be provided and properly designed so that people can walk safely and most efficiently like the example in the following photo taken during another weekday late afternoon.

Local governments help promote walking by making sure sidewalks are provided and clear of obstructions. Perhaps walkability can be used as an indicator or parameter for a city to be qualified as livable and true to the advocacy of sustainable transport. Walking should be encouraged to promote healthy living as it incorporates exercise in our daily routines. More people walking should also increase awareness for the advocacy for clean air and help initiatives to improve air quality, particularly efforts to reduce harmful emissions by motorized vehicles. Thus, it is not difficult to understand how investing in pedestrian facilities and promoting walking is not a smart move and a beneficial one for any politician’s constituency.