“Sharing the road” – bandwagons and fads? Let’s hope not!

There seems to be a lot of talk about “sharing the road” and the initiatives to have more bikeways. I hope I am proven wrong but it seems to me as if these current programs and projects are more of a fad. A lot of people (and local governments) join the bandwagon with little understanding of what needs to be done. It’s usually because of the good PR they get out of these that they agree to coming up with the token carless street or the haphazardly implemented bicycle lanes. More than PR, some cities are aware of the opportunities that come with such initiatives as international agencies and groups are willing to spend money to support such programs and projects. The question really is on sustainability and doing the right thing not only on initiating things or coming up with programs but on the substance itself. And by substance I mean that programs should also go into the details of designs. Too often, the “pwede na yan” approach is taken and this just won’t do. 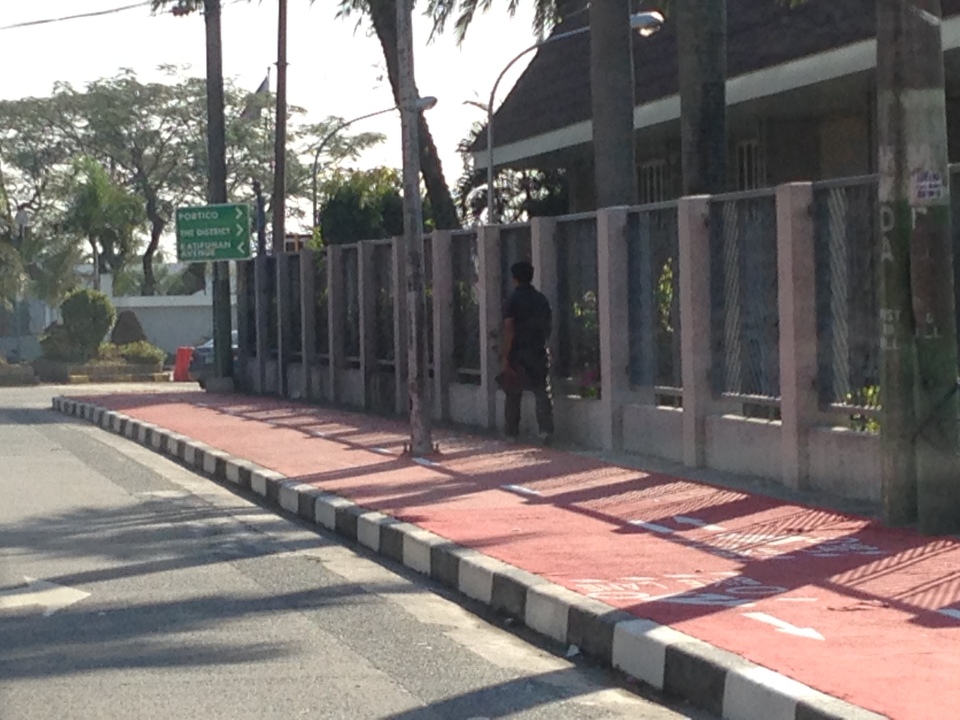 The MMDA painted the sidewalks in White Plains and designated them as bikeways, in a way alienating pedestrians.

A vision for what people want to have is there but it is ultimately how the achieve the vision that needs a lot of work. For example, bills are being filed in congress to force the creation of bicycle lanes along major highways. (And mind you there are a lot of similar bills filed in congress that upon closer inspection actually have little substance.) The premise here seems to be that if you build them then people will start cycling. That was not the experience in Marikina, which boasts of the country’s only bikeways network that includes many off-street sections. These bikeways were built at a time when the perception and analysis pointed to a critical mass of cyclists in that city that was thought to be surely the tipping point in terms of non-motorised transport. Nowadays, the same bikeways are used by motorcycles and tricycles and most cyclists we see are not commuters (e.g., cycling between home and work/school) but recreational cyclists. It would take Marikina some effort to promote commuting by bicycles and much effort in enforcement to correct the misuse of the bikeways. The “new” bikeways in Quezon City appear to be poorly conceptualised as the MMDA decided to paint the sidewalks along EDSA northbound without addressing the obstacles like electric posts. Still, it is an effort to put NMT in the consciousness or awareness of the general public (thanks in part to media’s making these news worthy items).

Cities like Pasig and Taguig like to show-off Ortigas Center and Bonifacio Global City, respectively, as their faces when in fact the cities have not done much in their original cores. The running joke is that the real Taguig is not the areas to the west of C-5 but the old Taguig, which is to the east. This Taguig is the one plagued by narrow streets and the proliferation of tricycles. It was not so long ago that a former mayor imposed e-tricycles on BGC (where they were not suitable) while not doing much to lift a finger in the mayhem of tricycles in old Taguig (e.g., along Gen. Luna). As for Pasig, you just have go along the Pasig River and the Manggahan Floodway to see what it has accomplished so far in those areas.

There are no quick fixes to the transport and traffic problems our cities are facing. In the case of Metro Manila, much is at stake for the long-delayed mass transit projects. And the DOTC’s announcements of projects being formulated or proposed are no longer taken seriously as they have not delivered on any of these despite 4 years of this current administration. For other cities, it is important to learn the hard lessons from the experience of Metro Manila. There is also a need for a drastic change in transport and traffic policies in our cities. Iloilo, for example, has built an expensive bike lane along Ninoy Aquino Avenue (Diversion Road) and has marketed its Esplanade as a haven for pedestrians and cyclists. Yet the city has not acted on the clamour to revisit the overpasses along Gen. Luna (Infante and Jalandoni flyovers). The latest information I got from the city is that there are issues in the design of the bikeway along the Diversion Road as the surface (they used pavers) is not suitable for cycling. It seems, also, that the city and cyclists were not consulted by the DPWH when the bikeway was designed and constructed resulting in many cyclists using the Diversion Road itself for traveling. This last example is a lesson for our local governments and national agencies that they need to cooperate with each other and turfing has no place in transport and traffic if we are really serious about bringing solutions to problems we encounter everyday.