I have written recently about reckless drivers including one that drove as he was “busy” with his girlfriend in the car. The latter, however, is more an exceptional case rather than one you’d commonly find in our roads. Perhaps the most annoying behaviour by what I term as “nuts” on the road, is counter-flowing. Counter-flowing often happens along undivided roads (no median islands or barriers to split opposing traffic). Traveling home one afternoon, we took the bridge from C5 and the Marikina Riverbanks Road to Santolan, Pasig. 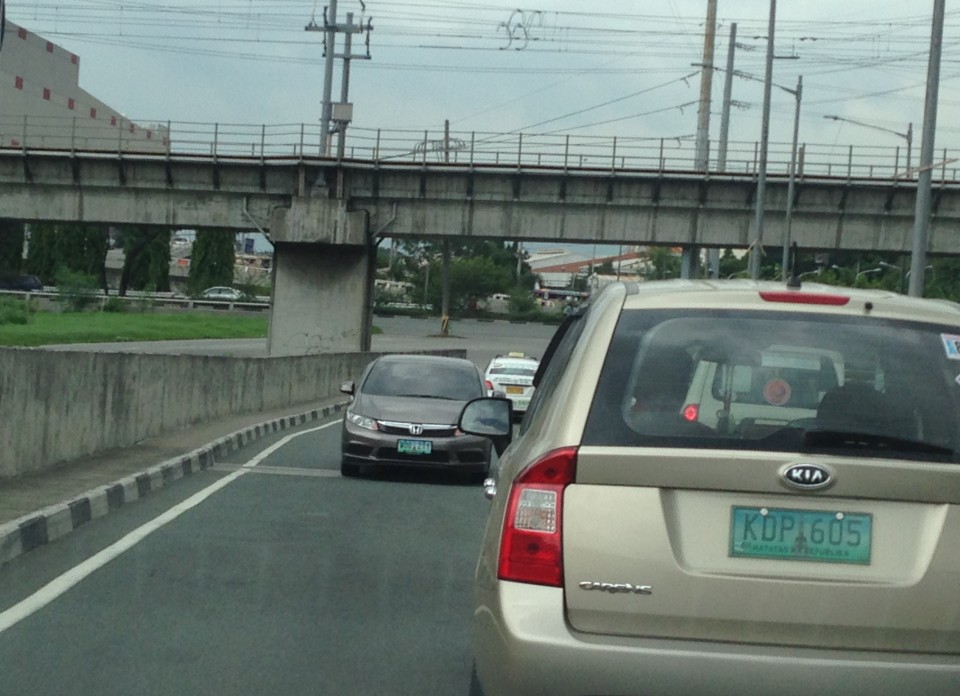 I think we all thought that the driver of this Honda Civic was bold enough to have been able to cover a long distance before opposing traffic collectively forced the driver to back off.

While counter-flowing is dangerous and obviously a traffic violation, there seems to be few if any apprehensions regarding this behaviour. Such non-enforcement of traffic rules and regulations lead to more drivers and riders to be encouraged to counter-flow just so they could get ahead of all the others before them who did follow traffic rules by queuing properly. For one, there are issues of police or enforcer visibility in many areas, and when they are visible they are usually busy managing traffic at intersections and or watching out for number coding violations rather than enforcing all the other traffic rules and regulations that can be more or equally important than number coding violations in terms of their impacts on traffic. One such violation is counter-flowing that often leads to severe traffic congestion as counter-flowing vehicle block opposing traffic and force their way in front of queued vehicles. I think this has caused a lot more problems, congestion and safety-wise than number coding violations, and deserve to get more attention from traffic enforcers and managers looking for solutions to the traffic mess we encounter everyday.