On jaywalking, overpasses and informal terminals

I had some errands last December and decided to take public transport instead of taking our car and wasting time parking the vehicle. There was significantly less traffic at that time of the year because schools already on Christmas break and everyone else seemed to be on the slow side of the holiday mode (read: not in shopping mode). I needed to cross the wide road that is Quezon Avenue and there was a sign where I usually crossed that it was now prohibited to cross there. I had to take the overpass to get to the other side and to the jeepney stop to board one to get back to the university.

The overpass at the Quezon Ave.-Araneta Ave. intersection is under-utilized. I base this on the several times I’ve used the overpass. Most people prefer to cross at road level, taking advantage of the traffic signal cycle that allows for gaps in the traffic for pedestrians to cross safely. Of course, there are those who cross any time and seem to tempt fate by their behaviour. They seem to tempt also the MMDA traffic enforcers assigned in the area but from what I have observed, enforcement of the “no jaywalking” policy is usually lax or non-existent. People regularly cross at ground level in plain view of traffic enforcers. 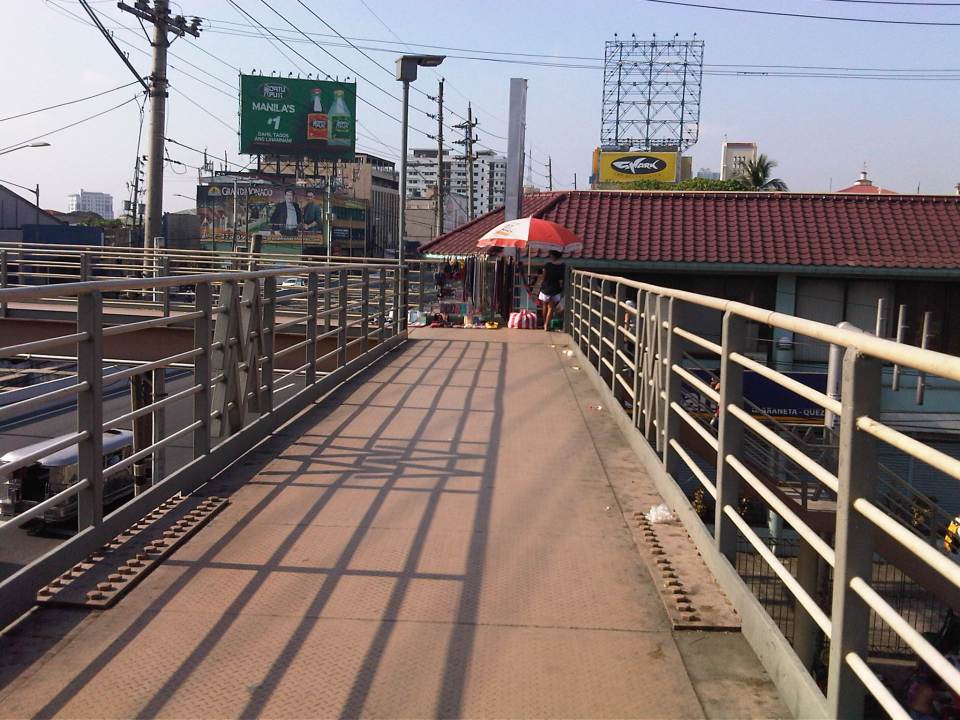 A vendor set-up at the corner of the pedestrian overpass at the Quezon Ave.-Araneta Ave. intersection. Obviously, there are few pedestrians using this overpass as most prefer to cross at ground level.

More vendors on the overpass – fortunately, there were few pedestrians using the overpass at the time. Its not the same for other overpasses that are crowded due in part to vendors occupying much of the facility.

The stairs for many overpasses around Metro Manila are a bit on the steep side. That’s generally not okay with senior citizens, children or persons with disabilities.

There is an informal, on-street jeepney terminal right at the foot of the overpass. If you are in a hurry, its best to try to board a jeepney on the second lane as they are more likely to proceed when the approach is given a green light. From my experience, it takes about 2-3 cycles before the “queued” jeepneys finally cross the intersection. It takes that time to at least have several passengers for the jeepneys before it proceeds to cross the intersection. Most passengers here are transferring from jeepneys plying routes along Araneta Ave. There shouldn’t be an informal terminal here and jeepneys occupy 1-2 lanes of the road at a critical point – the intersection approach. This means intersection capacity is significantly affected and many vehicles could not proceed as they are blocked by the jeepneys. Special mention is made of vehicles wanting to make a right turn but have to go through this “gauntlet” of public utility vehicles. Again, there are MMDA enforcers in the area but it seems the jeepneys and the barkers hold sway and likely with the blessing of enforcers. Such situations are commonplace in Metro Manila and many other cities, and contribute to traffic congestion and other problems commuters regularly encounter.