Requiem for the Antipolo-Cubao jeepneys?

From the time Metro Manila and Rizal transitioned to General Community Quarantine (GCQ), there have been limited public transport services connecting the two considering most Rizal towns are like bed towns to Metro Manila. The term “bed town” refers to towns, or municipalities, even cities, that are basically the place of residence of persons who during the day time usually travel out to workplaces or schools outside their areas of residence. Many who reside in Rizal province actually work or study in Metro Manila. Similar cases may also be found in the other provinces surrounding Metro Manila like Bulacan, Laguna and Cavite. These connections are made mainly by public transport, which for the National Capital Region (NCR) and adjoining areas currently comprise about 70% of total trips. The rest is by private transport. [Note: Not counted are trips mainly by walking and cycling. While everyone walks, walking is usually at the ends of the commutes.]

Current public transport services now comprise of buses plying the Antipolo-Cubao and Taytay-Gilmore routes that were among the first operationalized under the rationalization program of the Department of Transportation (DOTr). For the Antipolo-Cubao route, several companies have shared the load with mostly aircon buses running between Quezon City and Antipolo City. I wrote recently that there are now non-aircon (referred to as ordinary) buses serving this route and that in addition to the main line (Aurora Blvd.-Marcos Highway-Masinag Junction-Sumulong Highway via) there was now a branch going through Cogeo and via Olalia Road. 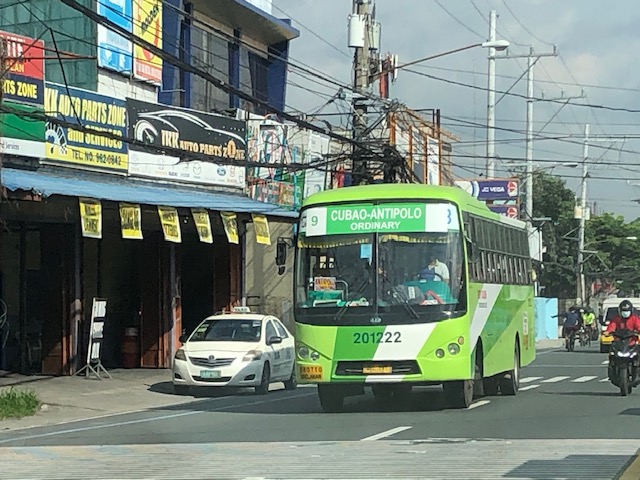 We got a comment about how perhaps DOTr and LTFRB plans to introduce variations to main routes including adding to the route number to distinguish one variation from another. While the original route signs look like the one on top of the windshield in the Aircon bus in the first photo with the white box on the left displaying the route number, the bus in the second photo shows two boxes. The second box to the right of the route name is blank. So perhaps there can be an ‘A’ to refer to the original Route 9 and ‘B’ can refer to the one via Cogeo. Does this mean there can also be a ‘C’ and that can be via the even older route via Felix Avenue, Cainta Junction and Ortigas Avenue. If this becomes a reality, then that probably puts the proverbial last nail on the coffin of the Antipolo-Cubao jeepneys. Jeepneys would have been phased out for the route in favor of the higher capacity buses.