Much has been said and written about the congestion at the immigration area at the Manila’s Ninoy Aquino International Airport. My most recent experience was a mix of good and bad as the lines were quite long prior to my departure for Bangkok. 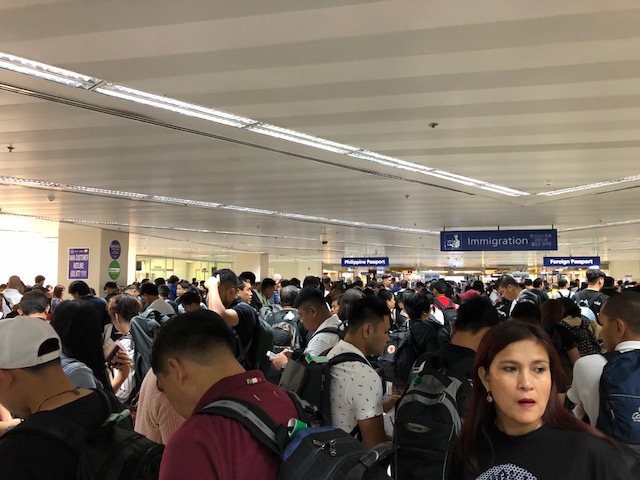 A very crowded immigration area when I joined the line. Note how far I was to the immigration booths and the meandering arrangement to maximise the space for queued travellers. I reckon that it took me almost an hour to get to a booth. Perhaps the airport can place some signs indicating how much time is estimated for one in line to get to the front? I wrote about this back in 2014 and proposed something similar to what I saw at airports like Narita and Incheon.

Meanwhile, the lines were shorter and faster upon my arrival a week later as shown in the following photo: 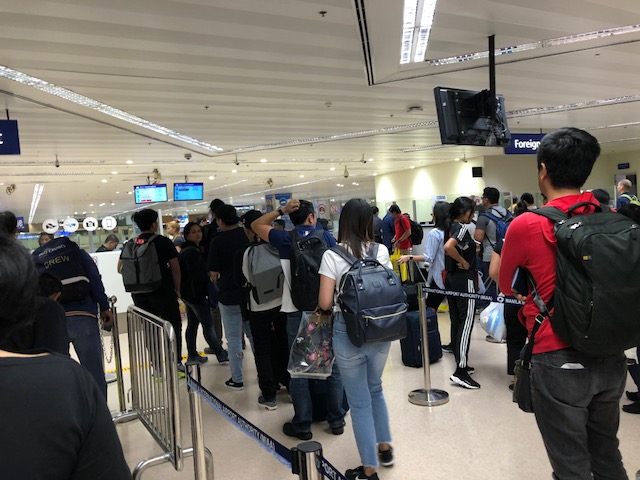 Believe me these lines are shorter and faster moving. There were many immigration personnel the night of my arrival including an old friend from high school. Only, there were only 2 plane loads of passengers so it will definitely be worse during the peak hours when larger aircraft with more passengers arrive at the terminal.

It is a good thing that the airport is installing machines for express lanes soon. That will surely expedite processing for, at least, Filipinos returning from abroad. I think the departures would be quite tricky since there are many requirements particularly for workers leaving for their overseas assignments as well as government employees who require travel authority (TA) for them to travel abroad for whatever purpose. I think its Terminal 1 that is more notorious for the long queues as I didn’t have similar experience when using Terminals 2 or 3. Airport and immigration officials should exert more effort to ensure such congestion is minimised especially as the country targets more passenger traffic through its international airports.

A lot of people get angry or feel aggravated when they arrive at Manila’s international airport and encounter the long, chaotic queues at the immigration section. This is particularly the cases at NAIA’s Terminals 1 and 2, which handle the most international arrivals among the 3 terminals. Terminal 3 has significantly less passengers despite it being the hub of Cebu Pacific, which currently enjoys higher passenger loads compared to rival Philippine Airlines but apparently serves less international passengers than PAL. 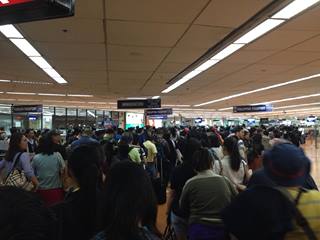 Multiple queues seem to merge into one mass of people, all eager to get to a booth for their passports to be stamped. Early on, you will hear a lot of people already complaining about the queues and stating out loud how the system could be improved.

Another photo showing multiple queues at the immigration section for arrivals at the NAIA Terminal 1.

The solution to this problem is quite simple and is actually already being implemented at the immigration section for departing passengers at Terminals 2 and 3. In both cases, there is only 1 queue for passengers that is served by several booths. This same approach to manage queues of arriving passengers is already being applied in many other airports elsewhere including Japan’s Narita and Thailand’s Suvarnabhumi where they have to handle even more passengers. Perhaps, also, a couple of booths and a separate line can be provided as courtesy to citizens of other ASEAN countries. There are such courtesy lanes in airports in other ASEAN countries, with whom we have existing agreements for visa free travels like Indonesia, Malaysia, Singapore, Thailand and Vietnam. An illustration of the system is shown in the following diagram: 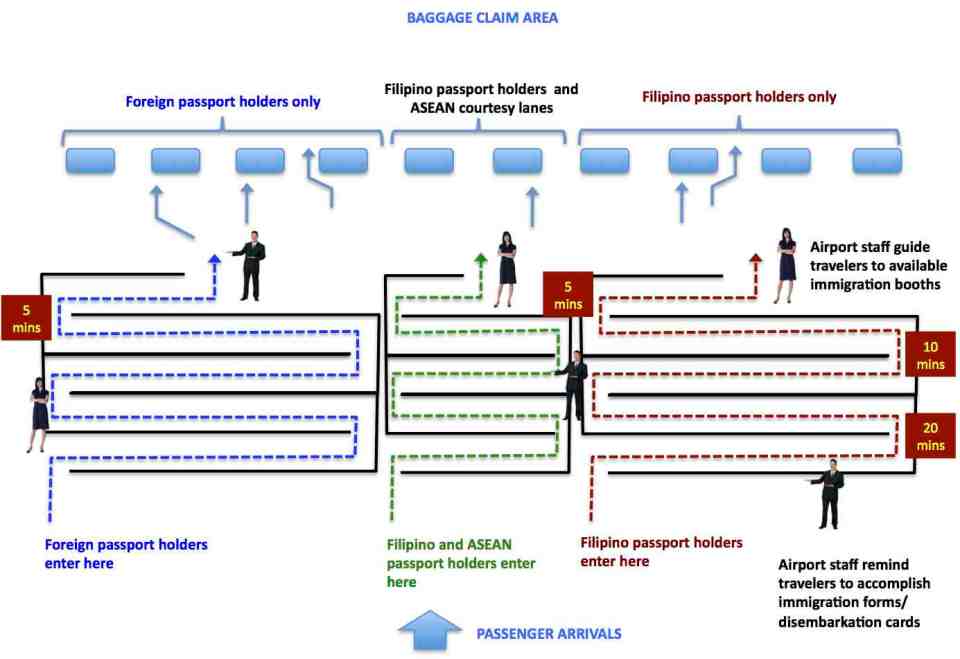 I posted the figure above to be clear about the systems I’ve seen in other airports that worked quite well in being able to handle the large number of arriving passengers at the airports. It is more orderly and efficient, and to me at least, it is fair for all passengers who tend to shift to lines they think are moving faster but eventually are frustrated when the line turns out slower than their previous one. We’re hopeful that airport or immigration staff can improve the system and really soon as this will effectively cut down the times people spend at the airport terminals.