Back to the old normal?

As traffic continues to worsen after, The MMDA has reinstated the number coding scheme albeit from 5:00 to 8:00 PM on weekdays for now. This is in recognition of the worsening traffic congestion brought about by people returning to their workplaces and the easing of travel restrictions across the entire population. People are now moving about as can be seen in transport terminals and commercial areas (e.g., shopping malls, markets, etc.). With the return of severe traffic congestion, it begs the question whether we are back to the ‘old normal’.

I thought the photo above pretty much describes how it was before Covid-19. The problem is that this photo was taken earlier today and we are still technically in a pandemic. Does the photo show the people’s renewed confidence in using public transportation? Or is it a matter of necessity (i.e., commuters having no choice but to risk it in order to get to their workplaces or home)? If they had motorcycles, these people would likely use them instead of taking the jeepney. I will also dare ask why don’t they bike instead? They seem able bodied enough to try cycling instead. Is it because their commuting distances are long? Or are there other reasons that evade us? If these are the same reasons and Covid-19 is not a major factor for their choice, then perhaps we are back to the ‘old normal’ and have not progressed significantly despite claims by various groups that we are experiencing a paradigm shift in favor of active transport. All the more that we need to urgently revisit and reassess how transport should be in order for us to transition to a more sustainable future.

A common sight along Philippine roads are overloaded public utility vehicles. It may be indicative of how difficult it is to get a ride because such is usually the case when there is a lack of public transport vehicles during peak periods (i.e., when transport demand is greater than the supply of vehicles). That lack maybe due to simply not enough vehicles to address the demand or that there is enough on paper and operating but they are not able to make the return trips fast enough. The first case means demand has grown but the number and capacity of vehicles have not kept pace with the demand. The second means that technically there are enough vehicles (franchises) but the traffic conditions along the route have worsened and has resulted in vehicles not being able to travel fast enough to cover the demand. 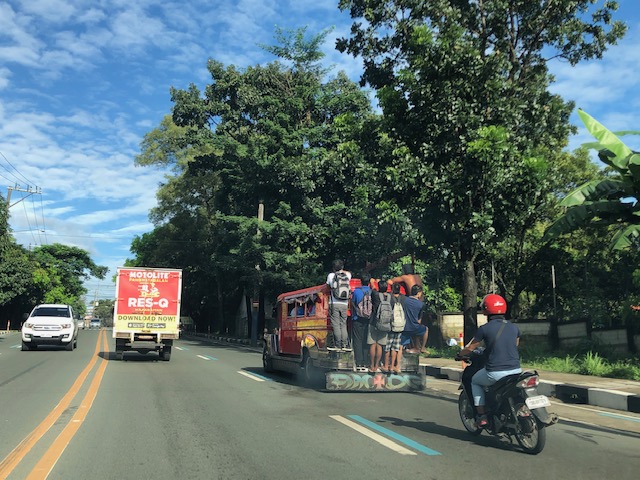 Jeepney with 6 passengers hanging by the back. All look like they are laborers or workers (construction?) but it is not uncommon to see students in their school uniform similarly dangling from jeepneys especially during the peak hours when its difficulty to get a ride.

Sabit is actually illegal and, if enforcers are strict, will incur apprehension and a ticket. Many local enforcers including those of the MMDA though are lax about this especially during peak periods. Jeepney drivers are more cautious when they know that Land Transportation Office (LTO) enforcement units are on watch as these are usually strict about passengers dangling from the vehicles. Newer jeepney/jitney models basically eliminated sabit as the doors are now on the right side of the jeepney instead of the back and there are no spaces or features to hold and step on to in the new models. It is for good as this is an unsafe situation for the passengers and there are reckless jeepney drivers who tend to exacerbate the situation by deliberately maneuvering the jeepney as if he wants passengers to fall off the vehicle. To those looking for a thrill (or death wish as a friend calls it), it is an exhilarating experience. But in most cases, it is a disaster waiting to happen.

I spotted this modified jeepney along my commute between Antipolo and Quezon City. The jeepney has been modified so its door is no longer at the back like most jeepneys but at the right side. Judging from the design and the license plate, this was not a “new” jeepney though its the first time I saw this along my regular commute. 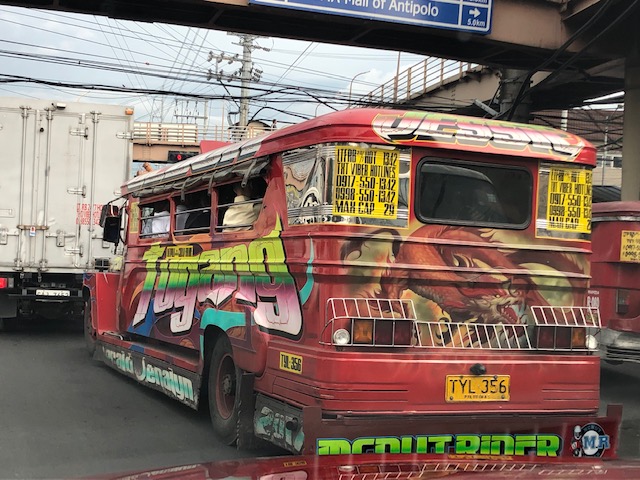 The design is a safer one as passengers board and alight from the right side and to the sidewalk (assuming the jeepney driver positions the vehicle in the right manner for a stop). A back door meant passengers boarded and alighted in front of another vehicle or is exposed to traffic. This reminded me also about the designs for LPG jeepney models that were rolled out more than a decade ago but didn’t really take off. The electric jeepneys also have models with the side door that is now found in most models including non-electrics in the modernization program. Perhaps the government should require all jeepneys to be at least retrofitted this way?

Metro Manila public transport – addition is good but we need subtraction, too

The company providing the P2P bus services is very enthusiastic (aggressive?) in promoting their services especially via social media. Satisfied commuters have also shared their experiences and a lot of photos about the buses and their commutes through social and mainstream media. I have read some articles carried by the likes of Rappler and Inquirer as well as blogs relating about the buses features, what people liked about the service and their suggestions on how to further improve and expand services. These have provided commuters with a taste of how good public transport could be in terms of quality of service.

The operations and the operator seems to have the blessings of the Department of Transportation (DoTr) and not just the present administration but from the previous one when the P2P services started. The fact that they have expanded services further these past few months is a testament to their popularity and the demand for high quality public transport services in Metro Manila. I personally believe that the next step is to give these buses exclusive lanes along their routes. Such would allow for buses to travel faster and providing a significant decrease in the travel times of commuters. Current operations, despite having non-stop runs between origin and destination, run in mixed traffic so their impacts in terms of travel times are diminished. Also, with exclusive lanes, they can probably consider adding a few stops between the route ends and be able to simulate bus rapid transit (BRT) services of which there seems to be little appreciation so far in the Philippines.

While the new buses and routes are very welcome and provide attractive options for commuting, there is still a need to address what is perceived as an over-supply of buses, jeepneys and UV express vehicles in Metro Manila. The attractiveness and higher service quality of P2P buses can pave the way for reducing the numbers of buses, for example, along EDSA. A similar strategy of introducing high quality bus services along other corridors and then reducing bus, jeepney and UV express units there can be implemented but will require much in terms of political will. The latter is important when dealing with operators and drivers of displaced vehicles, who may oppose such transport reforms and probably throw in legal impediments including those pertaining to franchising. Whether such opposition can be addressed by emergency powers or not remains to be seen but hopefully, even without such powers, the government can engage the transport sector to effect reforms and improve public transport (and ultimately commuting in general) not just in Metro Manila but in other cities as well.

Extreme commutes on a jeepney

I chanced upon this overloaded jeepney along Sumulong Highway. I counted eight people hanging behind the vehicle including the conductor. This is actually illegal and not just at present but always. The practice of hanging behind a jeepney is obviously unsafe and there is a high risk of people falling off. It would be a miracle not to have major injuries if one falls from the vehicle, and there is a high likelihood of fatality especially of a falling passenger gets hit by another vehicle trailing the jeepney. 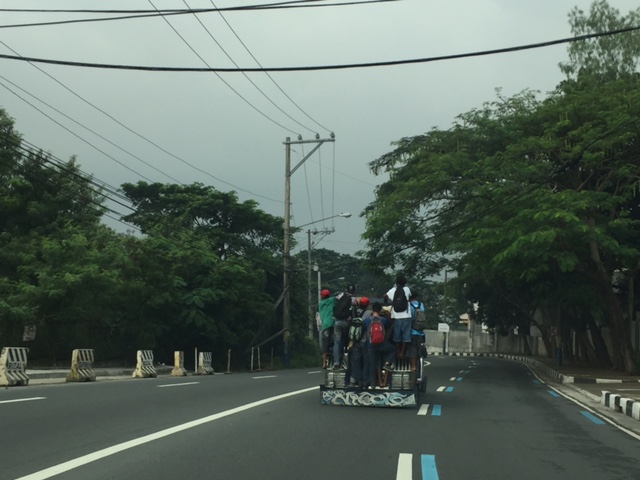 ‘Sabit’ or hanging on for a jeepney ride is more a necessity and males usually do this in order to get a ride home or to work. On many occasions, you will see men or boys in their office or school uniforms in the morning, braving it just so they won’t be late for work of school. While it is illegal, authorities seem to apprehend overloaded jeepneys from time to time (or according to some, just for show). I guess they, too, understand how difficult it is to get a ride and how this somehow allows people to get to their destinations. Surprisingly and despite reckless behavior among drivers, there seem to be few untoward incidents reported. Hopefully, public transport will improve so that people will not have to do such extreme commuting.

Resistance is futile? The case against electric jeepneys

There is a strong sentiment against electric jeepneys along the route where the COMET is currently operating. This opposition has always been there even before the COMET came about. I would like to think that this is partly due to the perception among many operators and drivers that conventional jeepneys would be phased out and replaced by e-jeepneys. But then isn’t this replacement supposed to be an upgrade in terms of having a more energy efficient and therefore economical vehicle that had a significant bonus of being low emission as well.

I finally got a photo of the sign Katipunan jeepney operators and drivers put up at the terminal below the Aurora Blvd. flyover. 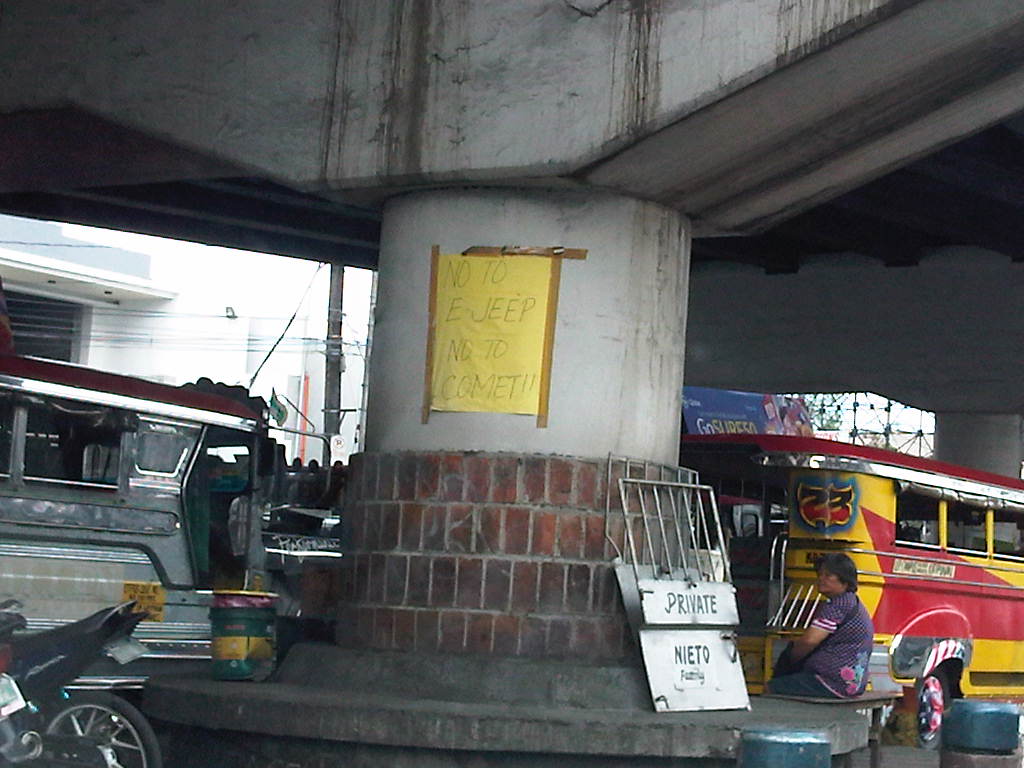 Given the recent innovations and the rapid advances in electric and other fuel vehicles, it should come as no surprise that more reliable and more efficient models of these vehicles will be available in the market. In the case of the Philippines where the thrust for e-vehicles is focused on public transport, there will eventually be a model that will comprehensively beat conventional jeepneys in every aspect. That is, if there is not yet a model that good. Arguably, the COMET and the latest e-jeepney model (BEEP) are already better than conventional jeepneys. However, their acceptability is pending with operators and drivers who seem uninterested with the case against conventional jeepneys. Perhaps these people are being fed false information by another party? Hopefully, they will open their eyes and mind to the reality that will eventually catch up with them if they do not embrace change.