On the road again

A couple of weekends ago, I found myself doing my first long drive in months. I wasn’t a passenger but the driver when the wife and I went on an excursion with neighbors-friends, one of whom arranged for our lunch at Ugu Bigyan’s Potter’s Garden in Tiaong, Quezon. We had two options to get there – one via the scenic route through Rizal’s backdoor that takes one to Teresa, Tanay, Baras and Pililla in Rizal, Pakil, Pangil, Paete, Lumban, Pagsanjan, Sta. Cruz and San Pablo in Laguna, the other via C-6, SLEX and STAR Tollways taking us through southern Metro Manila, Laguna, and Batangas. We took the latter route as it was faster (shorter travel time by an hour) and it allowed us to test our newly installed Autosweep RFID’s for the two tollways we used along the way.

The photo below was taken by the wife upon my prodding. I had not seen an arch as we traversed Sto. Tomas (Batangas), and Alaminos and San Pablo (Laguna). These were all along Asian Highway 26 (AH 26) or the Pan Philippine Highway system. The arch marks entry/exit to/from (boundary) the Province of Quezon from the Province of Laguna. Laguna doesn’t have its own arch. 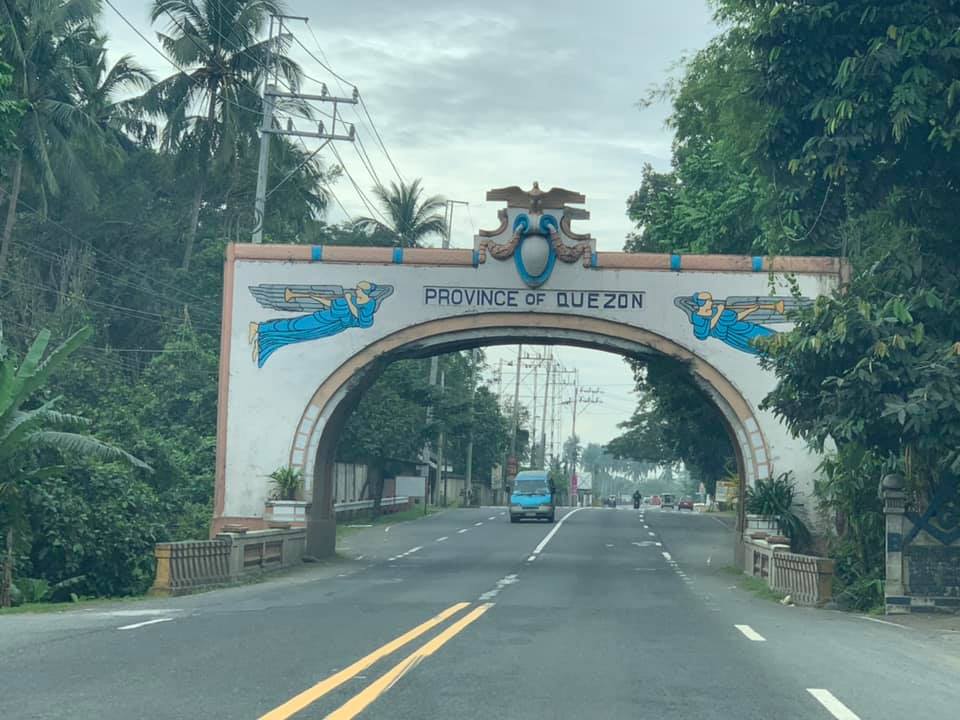 Arches like the one in the photo used to be the landmarks between towns and provinces. I wrote about these many years ago:

I have other photos somewhere but have not scanned/digitized them. Others I think that I left at my parents’ home perished with the floods of Ondoy.

With DPWH’s road widening program, many of these arches around the country may have been demolished. Those that remain tend to constrict traffic as they have space for two lanes and perhaps narrow shoulders at either side like what is shown in the photo. Perhaps others will be reconstructed and even enhanced to reflect a town’s or province’s attractions or attributes?

I was surprised to see a sign at the transport terminal of SM East Ortigas announcing van services between the mall and Lucena City (SM City Lucena terminal). This seems to be a very convenient service and it is via a route I consider to be quite scenic. This is the one via the “backdoor” of Rizal through the towns of Teresa, Morong, Tanay, Pililla in Rizal, Laguna province (Famy, Paete, Lumban, Pagsanjan, etc.) and Quezon province (Luisiana, Lucban, Tayabas). 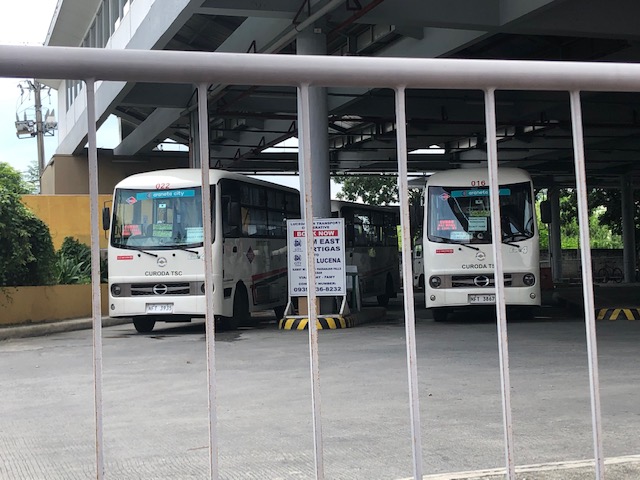 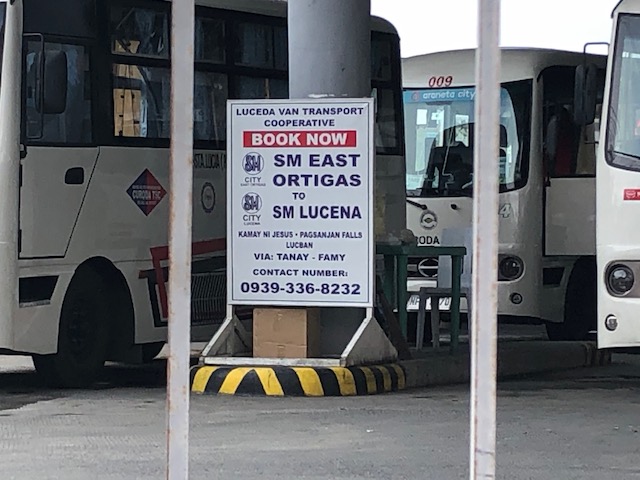 A niece posted on social media about a boat ride she took from Calamba, Laguna to Binangonan, Rizal. I immediately became curious about this as this presented an alternative mode of transport across the Laguna de Bay that could significantly cut travel time between major towns in Laguna and Rizal. Perhaps a boat ride could also cut substantial minutes between these provinces and Manila if only there was a direct connection or service with the Pasig River Ferry. I learned that it cost 50 pesos for a 45-minute trip from Calamba and Binangonan. Both the cost and the travel time are significantly less than what it would take via land and the roads connecting the two towns. I would estimate that the travel time using the South Luzon Expressway, Circumferential Road 6, Eastbank Road and Manila East Road would probably take more than 2 hours and the tolls alone will cost much more than 50 pesos. And this was via private transport. It would be longer and more expensive using public transport considering also that a person would have to make several transfers to travel between Calamba and Binangonan. 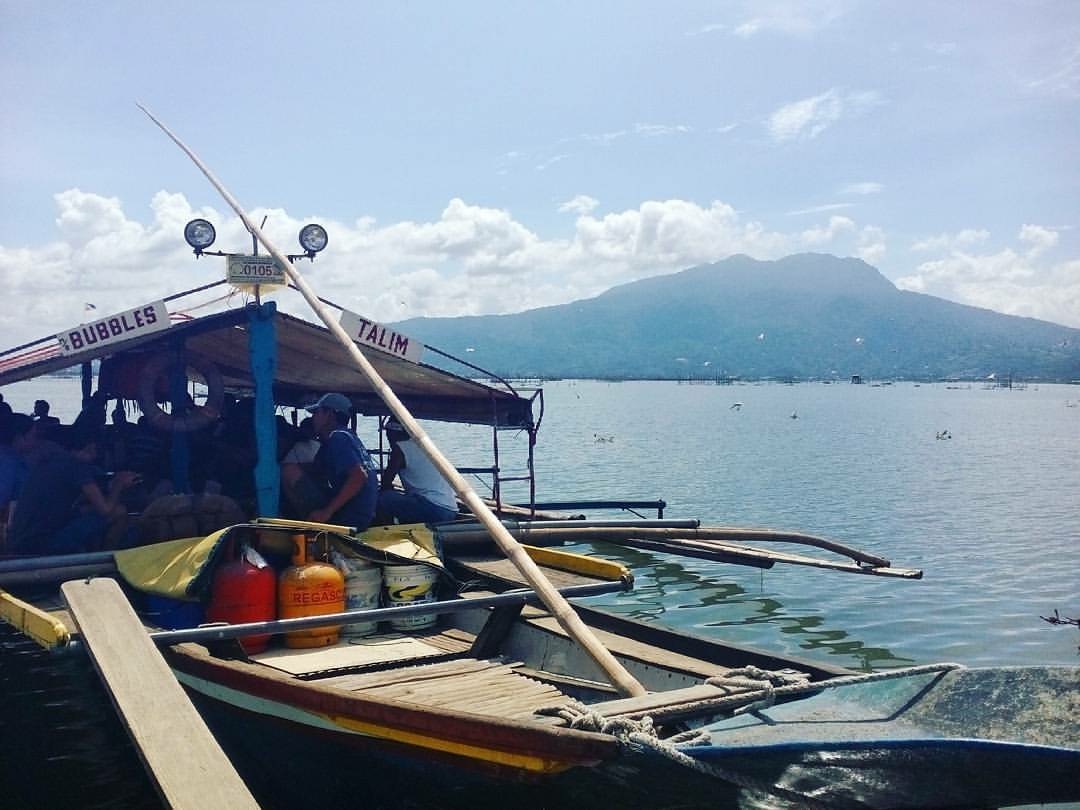 The boats are practically the same ones that ferry people to and from Talim Island and my niece mentioned that there is a regular service of at least one boat every hour. Certainly this option should be considered by transport planners as they think of alternative modes for more efficient travel.

Identifying opportunities with the MRT 7 and the LRT 1 extension

As we welcome 2014, we also look forward to major projects that will help alleviate transport and traffic problems in our cities and elsewhere in the Philippines. With the approval of the MRT 7 and LRT 1 south extension projects late last year, there should be less impedance to these much-delayed projects starting construction within the current term. These lines should have been built way back, – “ideally” in the 1980s, “practically” in the 1990s, and “urgently” in the last decade. At this time, I think the need for these lines are beyond urgent. I think perhaps we have reached the state of “desperation” is so far as mass transportation is concerned for Metro Manila and its surrounding cities and municipalities. 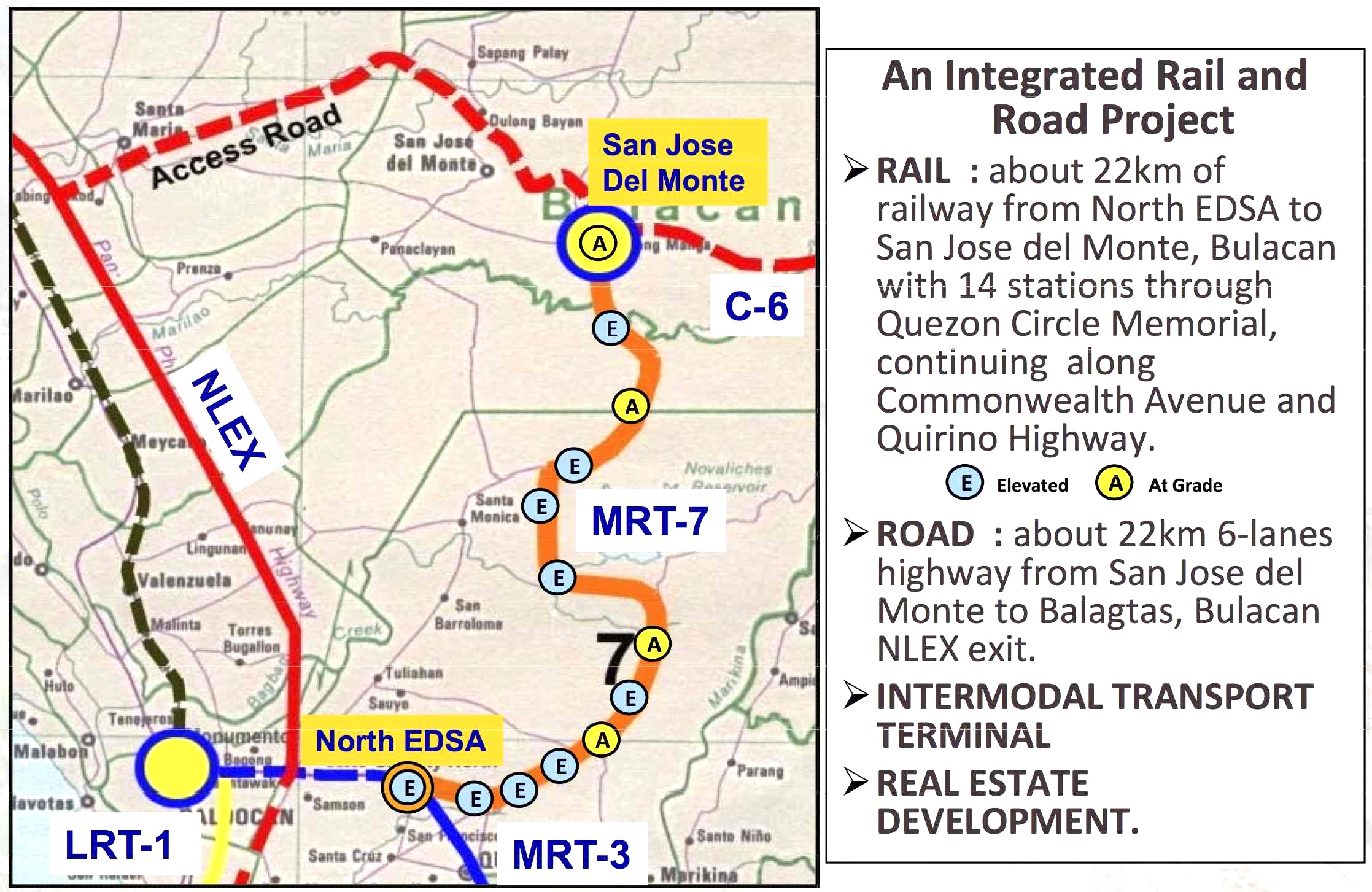 MRT 7 map from a public presentation made by the line’s proponents about 5 years ago.

Opportunities that can be related to the MRT 7 and LRT 1 lines include land development that fall under the category of transit oriented development (TOD). I think the government should not be too dependent on the private sector for developments around and near the future stations of the rail lines. The prevailing assumption that the private sector will do what’s best is only applicable to themselves and not the public good. Note the difference between perspectives here where it is only to be expected that private companies will be concerned with their own bottom-lines, i.e., revenues generated towards the maximization of profits. Economic benefits are and should be treated or regarded differently from such a perspective. The latter is the responsibility of the government as it concerns the public good and interest, and with a more macroscopic and strategic scale, with a long-term vision for development.

One such opportunity concerns informal settlers and their resettlements to areas outside the CBDs. Why do these people keep on returning to the cities when they are already supposed to have been provided housing elsewhere (e.g., Bulacan, Laguna, Cavite, Rizal)? The answer seems almost automatic: they don’t have the means for livelihood where they have been relocated and access to basic services and jobs/workplaces is limited (i.e., very difficult). The government must be involved and very deliberate in developing lands for housing around or near rail stations such as those for the future MRT 7 development. It cannot rely on the private sector to push for public housing when, frankly, those companies are driven by their desires to maximize their profits rather than push for the public good. That’s a bit of reality that we must accept and we must factor in decision making. The government already lost a huge opportunity when the National Housing Authority (NHA) effectively gave away prime lands in Quezon City for an upscale development. I leave it up to the reader to check the mandate of the NHA. It could have pushed instead for a development much like the HDBs in Singapore, which are not located in the boondocks but in prime locations in the city state. It need not be purely residential but a healthy mix of commercial development should be pursued along the lines of equitable transit oriented development (TOD).

Note that it should be clear here that when I say public housing this does not necessary mean the mass housing or low cost housing we tend to associate with failed projects in the peripheral provinces to Metro Manila. These are more like multi-level, medium to high rise developments you now find in major cities in Japan, China, Thailand and Singapore, which can be the model development for replication in other cities around the country. These can be reasonably priced units that can be affordable in terms of payments over a reasonable period of time. The concept is not new as there have already been BLISS projects before and Quezon City continues to collaborate with private sector for projects like Smile, Sunny Villas and the current Bistekville. These should be extended not just to your middle class and upper class (yes, they do make investments and have their units rented out to derive income) but formulated for the lower income classes (e.g., informal settlers), which now occupy much lands with their shanties. “Formalizing” these settlements should be a priority and the best locations for such developments, I think, should be around stations. Of course, there should be clear rules regarding the neighborhood and these rules should be strictly enforced for the buildings and area to keep their integrity (e.g., no extensions to the balconies or windows).

The concept and application of land-banking is not new and has been used by the private sector especially major developers like Ayala Land, Filinvest, Sta. Lucia, SM and Robinsons. Properties are acquired based on criteria regarding their potential for development. These lands are usually of low value and in many cases the land use need to be changed in order for these to be developed (e.g., agricultural lands being converted into residential, commercial or industrial uses). The national government and local government units should also do land-banking perhaps to address issues, for example, on informal settlers. And land banking should be along transit lines that are being planned (e.g., in Bulacan for MRT 7, in Cavite for the LRT 1 Extension, in Rizal for the LRT 2 Extension, and in Laguna for the PNR Commuter Line) so that issues pertaining to access to jobs, education and other services can be addressed by such transport infrastructure.

We look forward to the government realizing such opportunities that have for so long been available yet it has not taken into serious consideration. These require both strategic and practical thinking to be able to undertake master planning for such developments and their implementation over the immediate to long terms. No easy task but if our leaders are focused and determined to see these through, there’s no reason why these cannot be implemented and operational soon. Hopeful we are for these things this 2014.