Wouldn’t it be healthier and more effective for law enforcers to have bike patrols? Many of them seem to be detached from the communities they’re supposed to serve when they aren’t on foot or pedals but instead go around on motor vehicles. It also seems a waste that the motor vehicles assigned to these people are being used to train them for driving. Thus, you often see patrol cars (even motorcycles) that are supposed to be recent model vehicles but seem so battered already. Do they really use these for chases? Or are they damaged due to their being used as “training” vehicles? 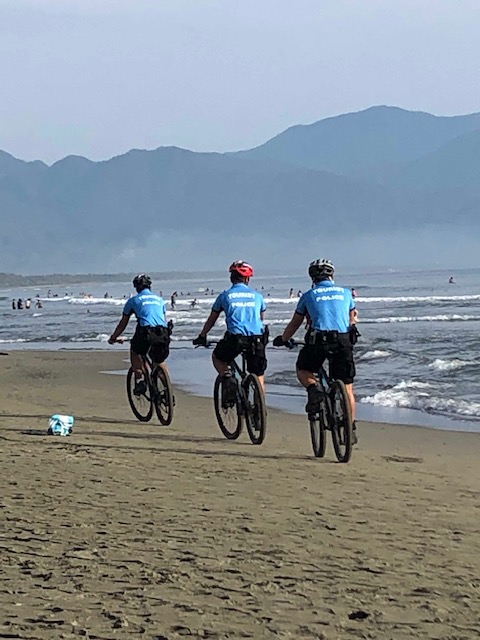 PNP officers on bike patrol along the beaches in Baler, Aurora

To be more effective, police officers should probably be roaming on foot or bicycles. They can be more in touch with the communities as there will be opportunities to mingle compared to if they were on cars or motorcycles. In one thread on social media, for example, there was a call for our local police to adopt the “Koban” style of the Japanese police where officers roam the communities mainly on foot and where many are recruited from the community for the latter and former to have some familiarity with the people and areas they are assigned to. Going around on foot or bicycle would also be a healthier option as surely they will be able to go more than the 10,000 steps (or equivalent) necessary to be classified as active.

In memoriam of road crash victims

I wrote earlier this year about a beloved aunt who was involved in a road crash. She was hit by a jeepney driven recklessly as she was walking; on her way to church one early morning. She was in the hospital for weeks before she finally passed away. It was painful to see her in her hospital bed, unconscious but fighting for her life.

No, I don’t feel anger anymore whenever I recall the incident and note that if the driver were just careful then she would still have been alive today. I feel sad. I feel sad and frustrated that despite all the efforts a lot of people have put into road safety programs and projects, there seems to be little in terms of the reduction of recklessness on the roads. The recent weeks, for example, are full of reports of crashes that claimed the lives of many and injured more. These often involved trucks that mowed down everyone in their paths. Then, you see a lot of motorcycles weaving in and out of traffic, many ride like stuntmen and without regard for life, limb or property as long as they can get away with it.

Additional laws in the form of local ordinances or Republic Acts will not be effective in reducing road crashes and the death toll it has brought upon us. It is the enforcement, the implementation of these rules and regulations. Rules and regulations are just words that, if not acted upon, do not have any effectiveness. And so we get to the root of the problem and that is enforcement; the lacking if not missing ingredient in the road safety broth that is necessary to save lives and create a safer environment for all. Does it deserve more attention and resources from our national government and local authorities who are in-charge of most of the enforce aspects of road safety? I do think so. Statistics on traffic-related deaths, injuries and damage to property compare strongly with if not exceed those attributed to drug abuse. When you purposely drive recklessly and crash into another vehicle or person, one is practically murderous. You also destroy the lives of people related to the person you kill or injure (e.g., that person could be the sole breadwinner of a family). The comparisons and examples are plenty and I am sure a lot of people have their own personal experiences about this as well as their opinions. For now though, let us reflect on those who perished from road crashes and perhaps think not about “what could have been” but instead of “what can be done.”