On interviews and propaganda

A colleague once mentioned that he didn’t want to grant interviews to the media because of a then recent experience of one channel splicing up his interview and making it appear as if he were arguing with a government official. True enough, these productions can be made like that in order to generate more interest on the subject. People watching that channel’s programs on news are hooked to the latter because of their sensationalised style of reporting.

When I was Director of our transport center at the University of the Philippines, I maintained a generally media-friendly policy but was selective of those I would grant interviews to or whom I would refer to colleagues whom I had to assure about the interviews not becoming similar to those a former colleague referred to. After all, we knew which programs tended to be on the sensational side. For one, you can base the “media filter” on the personalities behind these programs. At the very least, you’ve done some damage control by pre-empting

Fast forward to the present and a close friend pointed to what first appeared as propaganda material made by online supporters of the current administration (i.e., the troll army). However, upon closer review we determined to be an official production of the government. It included a lengthy part of an interview one of our former directors granted to the government station a while back when the government was embarking on its “Build, Build, Build” program. To be fair, if taken without the tags and labels attached by what people would call fanatics or die-hard supporters of the current administration, then the production is simply a information material. Sure, it can be used as propaganda material but then taken as is, it is certainly not “information, especially of a biased or misleading nature, used to promote or publicize a particular political cause or point of view” as the term “propaganda” is defined in dictionaries. In fact, a major part of the interview specifically mentioned failures of an authoritarian regime in building transport infrastructure that could have averted a lot of the problems we now experience. Context is very important and I thought that the labels attached to the video that made it look like it was something being peddled by the troll army definitely made it look bad.

I think this should be another lesson with our dealings with mainstream media and perhaps with social media, too. You cannot be too careful or meticulous about these interviews but then it is still a responsibility that should be taken on. Otherwise, we commit a sin of omission by not engaging in such activities. While we should not let our guard down in selecting which interviews to grant, there will be times when we just have to assume good faith and trust that the end product will not be fake news.

I just wanted to share the following announcement from the University of the Philippines Diliman about special lectures on transport. The lectures will be delivered at the Melchor Hall theater at the UP Diliman campus and is open to the public. 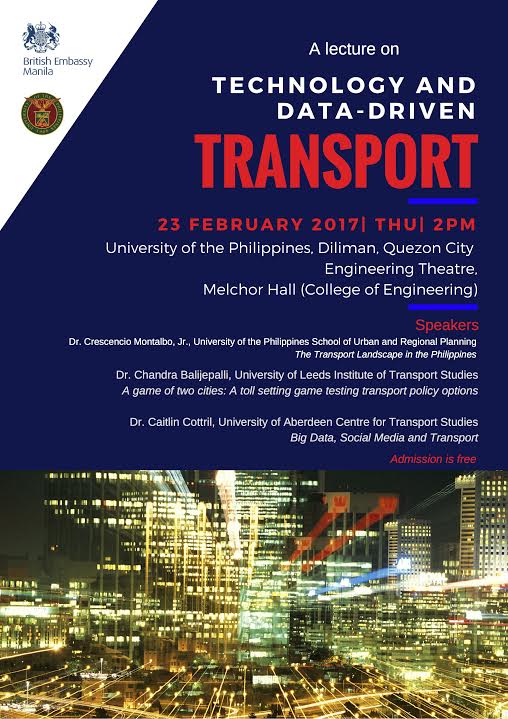