Are the traffic signs in the Philippines the same as those in the US?

This seems to be a simple question with a simple answer. And the answer is no. While the Philippines is signatory and has ratified the Vienna Convention on Road Traffic and the Vienna Convention on Road Signs, the United States hasn’t. The US also depends on their Manual of Unified Traffic Control Devices (MUTCD) that is by their Federal Highway Administration (FHWA).

Here is a nice article on Wikipedia for a comparison of signs in different countries:

I recall an interesting project I was involved in where we audited signs along what was a new Subic Clark Tarlac Expressway (SCTEX). The signs from Clark to Subic followed international convention while the ones from Clark to Tarlac followed the MUTCD. We recommended that the latter signs be changed to international convention. I am not sure if the tollway operator changed the signs as I recall there were still US standard signs there particularly for speed limits.

There was an uproar among commuters when Taytay installed traffic signals at the rotunda at Tikling Junction. The junction is the intersection of Ortigas Avenue Extension, which continues towards Antipolo, the Manila East Road, which connects many of Rizal Province’s towns, and Leonard Wood Road, which leads mainly to residential areas in Taytay. There is another road that is close to the junction, Cabrera Road, that qualifies the intersection to be an offset type. However, vehicle coming in and out of Cabrera Road mainly are with respect to the Manila East Road. 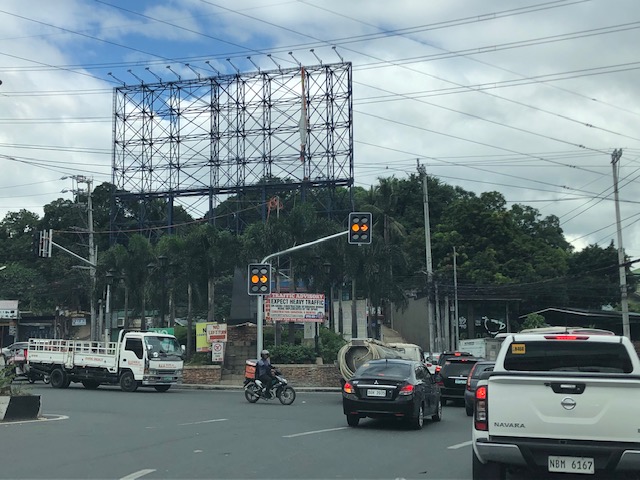 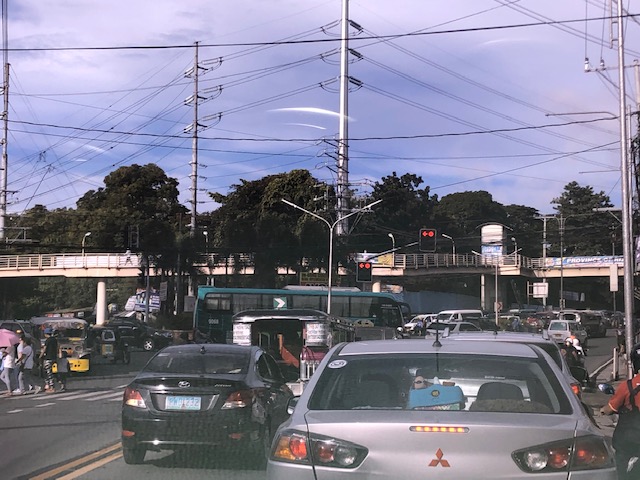 Traffic signals as seen from the Ortigas Ave. Ext. leg approach from Antipolo

The horrendous congestion last Thursday was due to the settings of the signals that forced most vehicles to stop even though there were movements that were not in direct conflict with others (e.g., through traffic along Ortigas Ave. Ext. from Antipolo towards the direction of Valley Golf/Cainta and right turning traffic from Ortigas Ave. Ext. to Manila East Road). The results were vehicles backed up all the way to Cainta Junction along Ortigas Avenue Extension and SM Taytay along the Manila East Road. We were able to experience the slight congestion the following day (Nov. 1) when we descended to Tikling from Antipolo. Congestion was slight probably because of the significantly reduced traffic due to the holidays.

I thought, based on experiences at this junction, that the traffic signal settings somewhat mimicked the style applied by Taytay traffic enforcers when they manually manage traffic at the intersection. Too often, they apply the “buhos” system where they try to let through all vehicles they see queued per approach. The outcome of this, of course, is longer stopped times to all other vehicles from the other legs resulting in longer and longer queues that become unmanageable especially during the peak hours (i.e., when vehicle arrivals are highest at the intersection). Basically, what happened last October 31 was that the “buhos” traffic enforcers were replaced by the machines (i.e., traffic signals) that employed the same system only this time there was no opportunity for some flexibility for movements that had none or the least conflicts at the intersection.

I was in Tacloban City last month and got to meet former participants to our training program who are working for their Traffic Operation Management Enforcement and Control Office (TOMECO). Among the topics of discussion was the traffic scheme for the central business district (CBD). Last year, the city had implemented a one-way traffic circulation scheme for the CBD as shown in the following map in the traffic advisory released by the city: 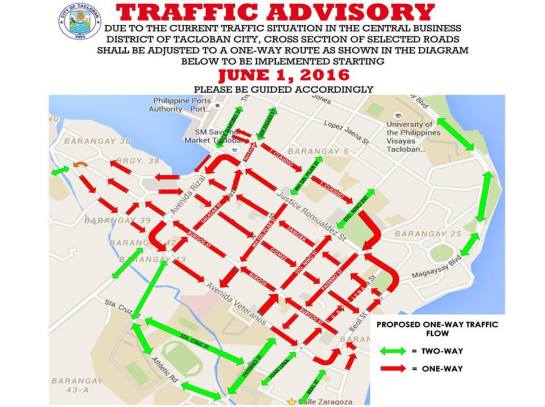 The city had to ease up on the one-way scheme, retaining it for the northwest-southeast directions and reverting to 2-way flow for the northeast-southwest directions. This decision was apparently due to the feedback the city got from various stakeholders about travel times and distances becoming longer due to the one-way scheme. This needs to be verified by collecting data pertaining to typical routes taken by vehicles, private and public utility, in order to get from an origin to a destination (e.g., from home to school). This can be simulated or estimated using field data (travel time surveys). We intend to use both as we make an assessment of the scheme and formulate recommendations for the city.

Will a flyover at Katipunan-C.P. Garcia solve the traffic problem in the area?

I read a news article about the proposal by the Department of Public Works and Highways (DPWH) to construct a left-turn flyover at the intersection of Katipunan Avenue (C5) and C.P. Garcia Avenue in Quezon City.  The flyover is supposed to be for vehicles turning left from the northbound side of Katipunan to C.P. Garcia Ave., which goes through the University of the Philippines Diliman

I think the DPWH should do well to re-assess their proposal along the lines of the reasons I have listed here rather than continue with the folly of building a left turn overpass alone. UP Diliman should also resist this overpass as, based on the news article, it would mean UP giving up some 8,000 square meters of its property for the project. UP already has given a lot for widening C.P. Garcia but that goes without saying that a through flyover might also require UP to give up property and particularly from its National Science Complex for such a project.

Among the things you get to observe at signalized intersections are the behavior of drivers given the setting of the traffic lights. While the cyclic transition from red to green to amber and then to red again seems routine and possibly trivial to many, it is an opportunity for traffic engineers to examine how drivers react to the lights. Among the most notable behavior are common violations like beating the red light and occupying the area within the yellow box despite full awareness that the exit is already full.

Then there are the not so obvious but risky habit of some drivers to beat the green light. That’s when a driver anticipates the green light and proceeds to move prior to the signal and before the intersection is clear of any vehicles or pedestrians that may have been caught in the change in signals. It is a practice that increases the probability of a road crash occurring as the clearance interval for vehicles whose paths may be in conflict is drastically reduced. This is a habit of many drivers who are familiar with the sequence of signals at an intersection and who know when its their turn for the green light.

In most cases, drivers and pedestrians are unaware of the length of time available for them to cross the street or intersection. There are no indications for when the lights will change and only familiarity would allow for drivers or pedestrians to estimate when it would be their turn to proceed. In Japan, many intersections play music during that tends to speed up when the signal will be changing. This audible indicator allows for both the blind and the busy to know whether it is safe to cross the street and if there is enough time to do so. It is also something that is probably taught to children for them to more easily know when it is safe for them to cross the street.

There is another innovation to traffic signals that is surely welcome to pedestrians and motorists alike but which may also have its disadvantages. I am referring to the countdown timer, which provides road users the information about the lengths of green and red signals (Note: Amber or yellow is usually fixed at 3 seconds.).  From the perspective of energy efficiency, such information may allow motorists to turn off their engines, usually done when one practices eco-driving, resulting in fuel savings. Meanwhile, drivers of vehicles approaching an intersection may be able to tell if there is enough time for them to do so, and if there isn’t enough time they may be able to slow down their vehicles to stop at the next red light. Countdown timers may also be a helpful tool for enforcement as the timers establish that a driver should be aware of the time. Thus, a driver can no longer reason with the apprehending officer that he/she was not aware of the remaining time for movement.

Pedestrians may also benefit from the knowledge of available time to make a safe crossing. This information should ultimately reduce the need for running in order to completely cross the street. The photo below shows the new countdown timer installed for the southbound through movement at the Katipunan Avenue (C5) – C.P. Garcia Avenue intersection. 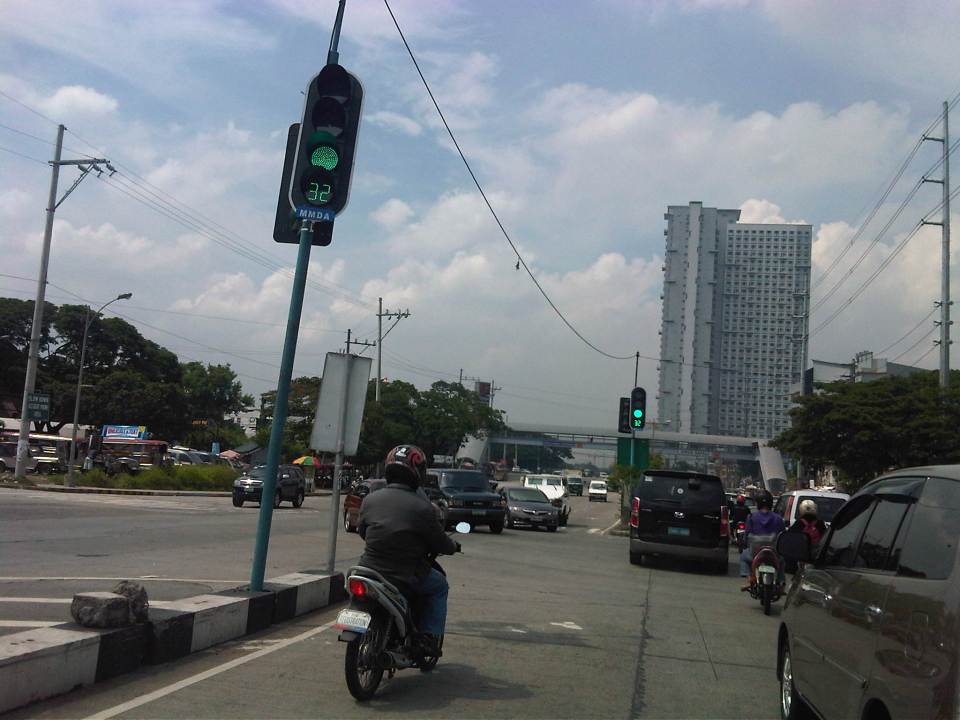 One possible disadvantage would be that aggressive drivers may still try to beat the red light by speeding up upon knowing what amount of time is available for them. Another disadvantage relates to beating the green light as even those unfamiliar with the signal sequence will have the information of how much time remains before they can proceed. Thus, many driver and riders start revving up their engines and push on their gears to anticipate the green signal. You can even imagine the countdown timer being used as if it were ticking towards to start of a race.

Despite the disadvantages mentioned, countdown timers should prove to be more beneficial than detrimental in most situations. In fact, countdown timers like the ones already installed at intersections in Bonifacio Global City should enhance traffic safety provided that these devices are fully complemented by enforcers who would flag down motorists and pedestrians who would attempt risky actions in relation to the timing device. Of course, from the research perspective there needs to be a scientific assessment of the actual impacts of countdown timers much like the studies already conducted elsewhere to determine and even measure the effects of these devices on both motorists and pedestrians. Only then can we truly say if they do enhance safety and promote more efficient operations at a signalized intersection.