Cubao is one of the busiest areas in Metro Manila where a lot of public transport routes converge. It is a major transfer point for road and rail transport particularly near the junction of three major roads – EDSA, Aurora Boulevard, and E. Rodriguez Avenue, which is only a few meters from EDSA. I took a few photos when I was in the area one time and here they are: 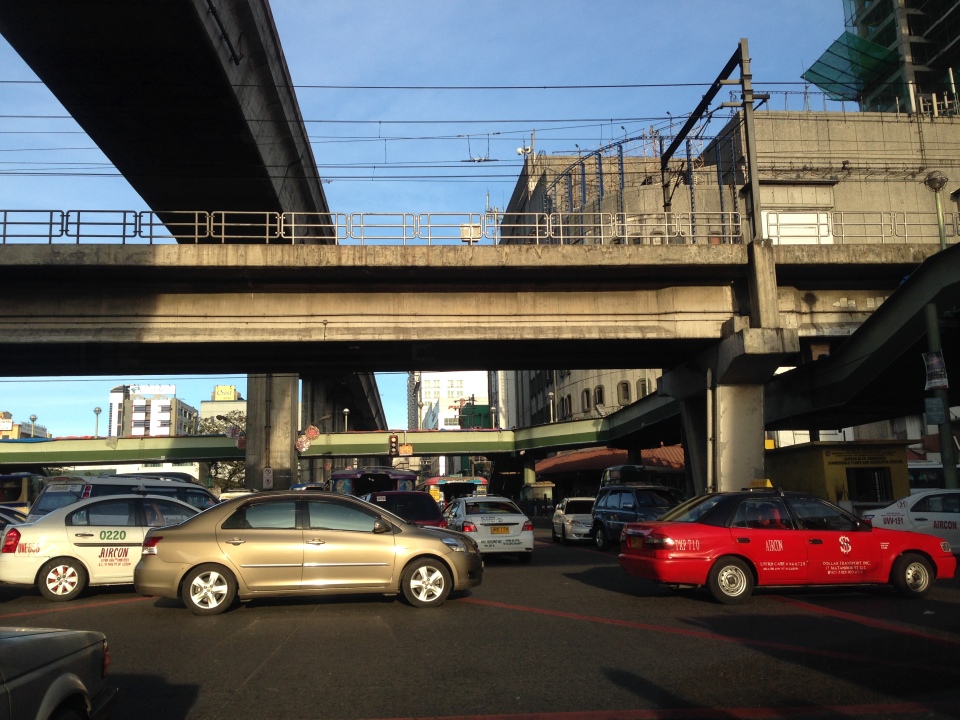 EDSA and Aurora Boulevard intersect at ground level. There is, however, an underpass along EDSA bypassing the at-grade intersection. Shown in the photo are the two rail transit lines passing through the area – EDSA MRT 3 at the 2nd level and LRT Line 2 at the 3rd level.

After crossing EDSA, eastbound jeepneys approach the LRT 2 Cubao Station, which is beside the Gateway Mall of the Araneta Center. Traffic along this section of Aurora Blvd. is typically slow as jeepneys bound for different destinations in the east congregate here. Meanwhile, on the other side of EDSA, the same situation is experienced as jeepneys line up along informal terminals on the street. This usually leads to congestion and low throughput along Aurora at the intersection.

Jeepneys tend to linger under the LRT 2 station and occupy practically all the lanes with most jeepneys deliberately moving at snail’s pace as they try to get passengers. This is the case along both directions of Aurora Boulevard, which makes one wonder why many people don’t take the LRT instead. Of course, for eastbound passengers, the answer is simply that the LRT ends at Santolan Station in Pasig (along Marcos Highway and just after the Marikina River). Most passengers would rather take a single, direct jeepney ride from Cubao to their destinations rather than make the difficult transfer at Katipunan (for Marikina-bound passengers) or Santolan (for Rizal and Pasig-bound commuters).

I wanted to take some photos during the night time one time we were passing under LRT 2 along Aurora Boulevard near the Gateway Mall. The area wasn’t well lighted though so all the photos didn’t come out right. This blight is similar to the situation along the LRT Line 1 corridor stretching from Caloocan to Pasay, and affecting areas along Taft Avenue and Rizal Avenue. The areas including the rail superstructure are so dirty mainly because of the emissions from road vehicles, particularly jeepneys, buses and trucks with surplus and generally poorly maintained engines. Hopefully, the local governments and MMDA can address problems of bright with a campaign to install pocket and hanging gardens like the ones already along EDSA. The plants, if cared for properly, will surely help improve both air quality and aesthetics in these areas darkened by design and soot.