Congestion due to roadworks at Sumulong-Olalia

The Sumulong Highway sections emanating from its intersection with Olalia Road have been experiencing traffic congestion in the mornings the past few days due to road works being undertaken at the intersection, and along Olalia Road and the Masinag-bound side of Sumulong Highway. Some days, traffic has been bearable and its just like having an ill-set traffic signal at the intersection where it would take you several cycles before getting through. Recently, however, many motorists have lost patience (or probably are simply pasaway) and have been encroaching on the opposing traffic lanes, much to the dismay of those who opted to follow rules. This panggugulang or going ahead of others need to be lessened with those guilty being apprehended or turned back to discourage future transgressions of traffic rules. 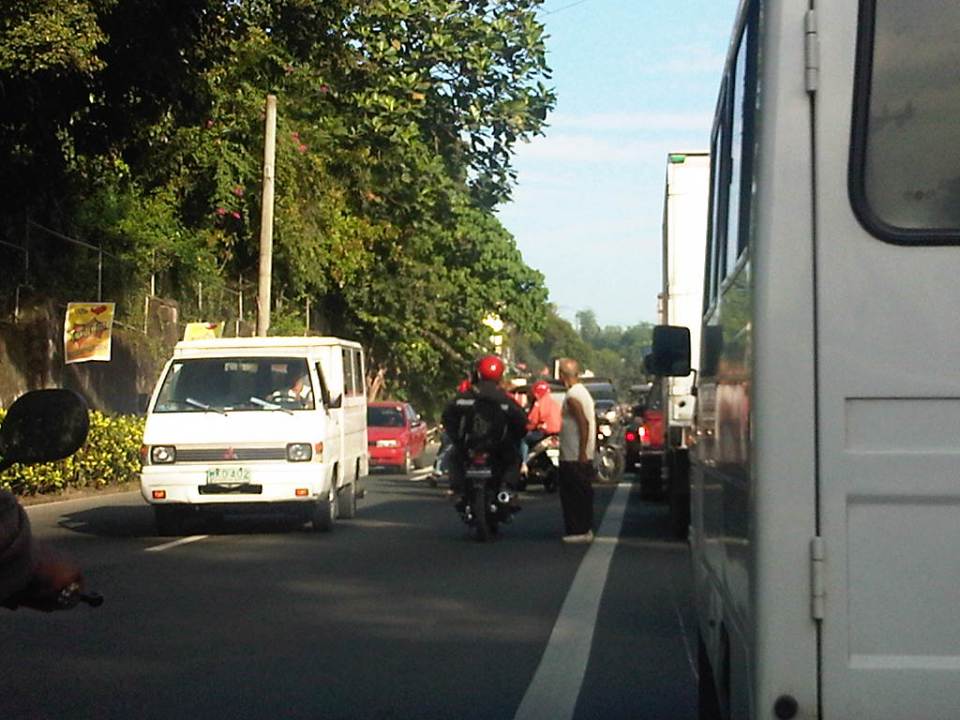 Queue at the curve towards the direction of Olalia Road

A look at the side mirror shows a long line of vehicles along Sumulong. The queue sometimes reaches the strip of stalls selling cashew, suman, and other local delicacies.

There’s really very little one can do about traffic management in the area considering the limited space available for vehicles turning to/from Olalia Road. It’s basically one-way at the approach to Sumulong Highway so there will definitely be a queue along the outermost lane of Sumulong due to the constriction at Olalia. However, in the morning, there is an obvious difference in the directional distribution of traffic along Sumulong with most vehicles moving in the direction towards Masinag rather than to Antipolo Church. That means the Antipolo-bound traffic can fit along a single lane while opposing traffic can use three lanes – 2 bound for Masinag and 1 for Olalia. Enforcers may want to use traffic cones for this temporary traffic management scheme as without such tools, there is a tendency for a bit of confusion as impatient drivers resort to encroaching on the opposing lane (counter-flow) and resulting in more severe congestion (and unsafe conditions) as they attempt to merge with traffic at the intersection. Of course, that goes without saying that it only takes one idiot to counter-flow for others to follow.