One alternative route for my daily commute is Ortigas Avenue. While there are several choke points along this road, I will focus on those between the Ever mall and Cainta Junction. Congestion is also usually experienced between the Manggahan Bridge and Ever but these are mostly due to traffic interruptions because of vehicles turning to and from the many subdivisions whose access/egress line up along Ortigas Ave.

The Ever mall is already a given as a significant traffic generator in the area. However, there is something about its circulation particularly the flow of vehicles in and out of the complex that detrimentally affects Ortigas Ave. traffic. While through traffic along the eastbound direction should use Ortigas Ave., many opt to go through the wide driveway of Ever in order to bypass the choke point that is the exit driveway of the mall. Many of these exiting vehicles are jeepneys turning left into Ortigas westbound (their routes terminate here and make their turnaround via Ever’s driveway). These effectively block the flow of traffic along Ortigas eastbound especially in cases when the westbound direction is also congested (i.e., due to sheer volume as well as stopping vehicles across the mall). 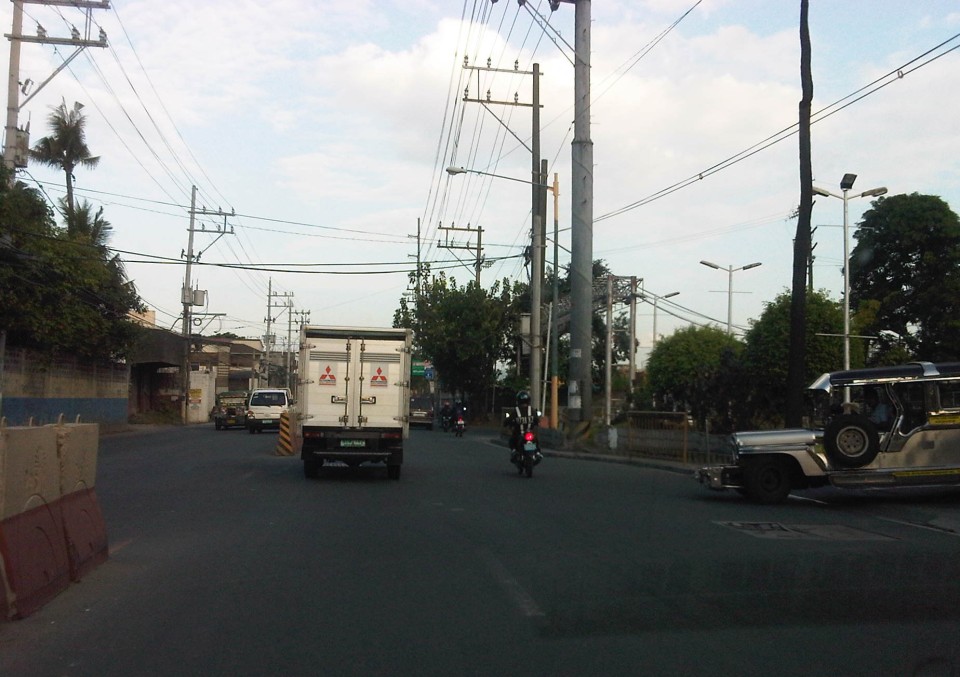 Vehicles exiting from Ever and turning left to Ortigas westbound

Once eastbound vehicles are freed from the blockage of left-turning vehicles, they have to merge with significant right-turning traffic from Ever that includes buses and mostly through traffic vehicles whose drivers were ‘wise’ to have taken the driveway instead of Ortigas to get through the choke point. The situation results in another choke point right after the first one as the traffic along two lanes of Ortigas eastbound merge with the traffic equivalent to 2-3 lanes turning right from Ever. The total of 5 lanes of traffic squeezing into 2 lanes immediately after is a prime example of a bottleneck.

Right after the short 2-lane section is a sudden widening of Ortigas Ave. in front of BF Metals. I have heard it said that this is the ideal road width for Ortigas Ave. considering the volume of traffic passing through this major corridor connecting Rizal province with Metro Manila. There are practically 4 lanes for each direction at this short section so its easy to project these lanes on maps to see what properties would need to be expropriated if the objective is road widening. (Of course, the best option should still be to pursue a mass transit system along this corridor.)

Ideal road width – Ortigas Avenue at its widest is the section across BF Metals. Vehicles here spread out along the many lanes suddenly available. But then people will eventually and immediately realize this is the mouth of a funnel. Note the sign indicating that vehicles are entering the Province of Rizal from this point.

The eastbound section in front of BF Metals is usually parking lot in the evenings. This is due mainly to the 4 lanes almost abruptly constricting into 2 lanes just past BF Metals. Compounding things is the U-turn slot located here where many jeepneys whose routes end at Cainta Junction make their turnaround. Turning vehicles are assisted by “tambays” earning their money by blocking eastbound vehicles to make way for U-turning vehicles.

Finally, there is Cainta Junction itself, which is a signalized 4-leg intersection that handles a tremendous volume of traffic all-day. I am sure that there are efforts for the traffic signal settings to be optimized but more often there is human intervention for traffic management at the intersection. Whether this causes more severe congestion is quite obvious to many travelers going through this intersection. Queues along Imelda Ave./Felix Ave., for example, can reach way past Village East even reaching Vista Verde on a bad day. This only shows that the intersection is already severely saturated and conventional traffic management or signal settings can no longer handle the traffic. Perhaps the next stage of engineering intervention for this intersection is grade separation or the construction of a flyover or two at the intersection. Notably, such a project should including strategic widening along Ortigas Ave in order to balance the number of lanes feeding into and receiving traffic from the intersection.

A view of the traffic approaching Cainta junction – there are only 2 lanes along the eastbound side of Ortigas and public utility vehicles stopping here only exacerbates the congestion along the road.

Is road widening the ultimate solution to Ortigas Ave congestion? I personally don’t think so. As I have mentioned earlier in this post and in previous posts the key is still to come up with a mass transit system to serve this eastern corridor. Yes, there will eventually be a Line 2 along Marcos Highway, the main alternate (or competing?) route to Ortigas but is is obvious that even with a railway line along Marcos Highway and connecting to Aurora Blvd., there will still be an urgent need for a similar capacity line along Ortigas. The buses and jeepneys can no longer handle the demand and their poor levels and qualities of service have given rise to a proliferation of UV Express and pushed people to purchase cars and motorcycles. Congestion can be reduced significantly with a mass transit system along Ortigas. Without this transit system, Ortigas will just continue to be congested even if the entire corridor is widened; except perhaps if it is widened like Commonwealth Ave. in Quezon City. I don’t think that is possible and practical.