I was on some errands and had to pass through the Sen. Lorenzo Sumulong Memorial Circle from Taktak to the other side of Antipolo near the Lico Circle. The section from Robinsons Antipolo where the Sumulong Circle intersects with Sumulong Highway until C. Lawis Street is being widened and photo below shows the work in progress. The road is a dangerous one especially at night. There are a lot of electric poles in the middle of the newly constructed lanes and power and phone lines dangling in many places. The unfinished parts have a lot of excavations, construction material and debris from the demolished buildings. 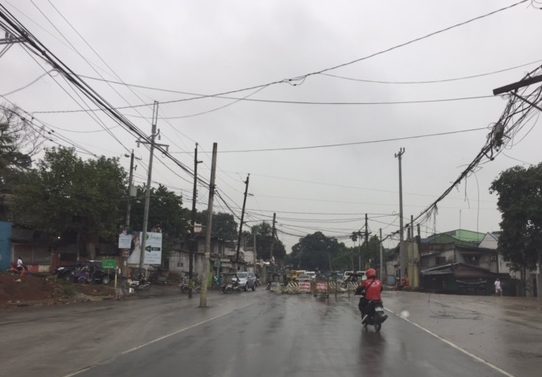 I took the following photos while traffic was at a standstill:

Initially, it was not so obvious what the cause of congestion was except for the dramatic sag along the road. Both sides appeared to be congested.

Closer observation showed my direction to be congested up to a certain point whereas the opposite direction across from me was free flowing and traffic build-up along the other side also appeared to be from a certain location at the bottom part of the sag.

It turned out that out of the 6 lanes of the road, only 3 lanes were available to moving traffic – one lane along my way and two along the opposite. Vehicles were parked along 2 lanes of the road in front of the Antipolo City Police Station and 1 lanes across from it. It seems quite ironic  considering the police is also tasked with traffic enforcement and management and yet the problem emanated from their station. I am not sure whose vehicles are those that are parked along the road. Perhaps many are owned by police officers? By comparison, the national high school beside the station and the nearby hall of justice did not seem to generate as much vehicular parking as the station. The obvious solution though would be to have an off-street parking lot or facility. Looking at Google Maps, there are some locations along M. Santos Street where a multi-level parking facility can be built but land needs to be acquired first and that can be a difficult task. Another option might be to relocate the main station (i.e., headquarters) elsewhere where there is space for proper facilities including off-street parking. Perhaps they should have a place at the new government center being developed by Antipolo?