School is back and so are safety issues for schoolchildren

It’s school time once again in most parts of the Philippines. Public and private schools including most colleges and universities have resumed classes this month of June while others start this July and August. But with the resumption of classes, there is also the re-emergence of issues pertaining to the safety of these children. Students are exposed to the hazards of commuting. These include the likelihood of being injured or killed by vehicles running along the roads the students use to get to school.

The photo above is a typical scene in front and around many public schools in the country. Schools are located along national roads and often lack spaces for students and their guardians. Many end up occupying the roads and causing congestion. Of course, that congestion is secondary to the safety of these children. Nevertheless, such issues need to be addressed in a more holistic manner rather than attempt to solve one as if they could be isolated. 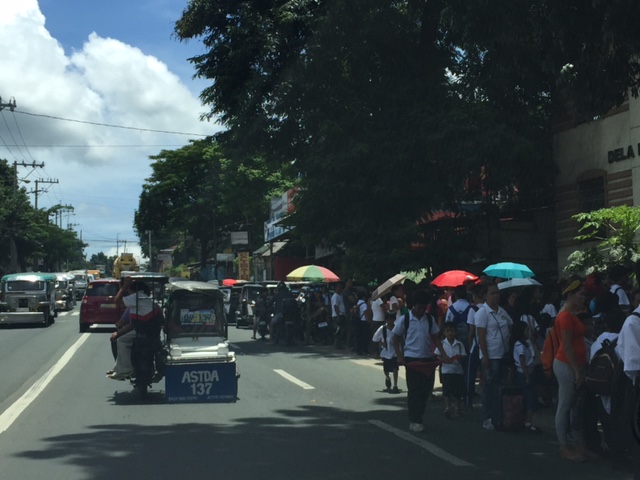 Most students of grade schools and high schools around the country either walk or take public transportation in their commutes. They are exposed almost daily to motor vehicle traffic along the roads and risk being sideswiped or run over by vehicles. In certain cases, small children walk significant distances thereby increasing the likelihood and risk of being harmed by traffic.

Traffic is particularly bad along most roads leading to schools mainly during the morning, mid-day and afternoon periods when students arrive or leave their schools. In Metro Manila, for example, the worst congestion are experienced along major roads like Katipunan Avenue (due to traffic generated by Ateneo, Miriam and UP) and Ortigas Avenue (due to La Salle Greenhills). That means a lot of time and fuel are wasted and more emissions are released into the air that we breathe. However, one can argue that in terms of road safety, this is better since gridlocks mean slow moving vehicles that make it safer for walking or cycling. This is not the same in the provinces or rural areas where there is less congestion and vehicles travel at faster speeds.

While there are initiatives pertaining to revisions in speed limits, such are limited (pun not intended) by how much action can be done in order to enforce these regulations. Add to this the requirement of having the instruments to measure and record speeds in aid of enforcement. This was what MMDA did along Commonwealth Ave. and Macapagal Blvd. with the acquisition of two speed guns. I don’t see them using these anymore and wonder if the instruments are still working. Meanwhile, expressway authorities are using these as they continue their enforcement of speed limits along tollways. [I am aware of NLEX and SCTEX enforcement units employing speed guns along those tollways.]

The DPWH is also doing its part by doing road safety audits and identifying measures to reduce the likelihood of crashes involving these students. Among these are rumbles strips and, in some cases, the construction of sidewalks but these are not enough. There were recommendations from an iRAP project many years ago but the agency was resistant to what they thought were new and innovative ideas that were actually already being implemented in other countries. Perhaps these recommendations and that iRAP study could be revisited and solutions drawn from there?