One small step and a giant leap

Here’s a different kind of article that blends three of my favourite topics – transport, space and watches. Its the 50th anniversary of the first moon landing. That’s the Apollo 11 mission in 1969. It took a lot of calculations for men to finally reach the moon and return safely to earth. There certainly were a lot of factors that affected the trip and these are not as simple as traveling between points A and B like what we usually try to figure out for conventional earthbound transport.

Did you know the first watch on the moon was an Omega Speedmaster chronograph? They needed them and other instruments for their precision that’s required for such sensitive and demanding missions.

Subsequent versions of the moon watch have already had updated movements inside them but these Speedmasters are still the standard in as far as NASA is concerned.

There were actually 2 moon missions in 1969. The first one, Apollo 11, in July and the second, Apollo 12, in November. The next one, Apollo 13, was a failure in terms of the moon mission but succeeded in terms of the astronauts surviving what must have been a terrifying ordeal in space. If you watched the movie, there was a part there that was supposed to have happened where they used it the chronograph of their watch to time a procedure they had to do while troubleshooting their module.

Quite expensive these Omegas are. However, there’s another watch that has been officially recognised as used on a moon landing. That other moon watch is a Bulova (sorry Rolex but the watch that was supposed to have been brought to the moon was more an accessory or memento than an instrument actually used by an astronaut on the moon). Here’s a piece associated with the 4th (Apollo 15 in 1971): 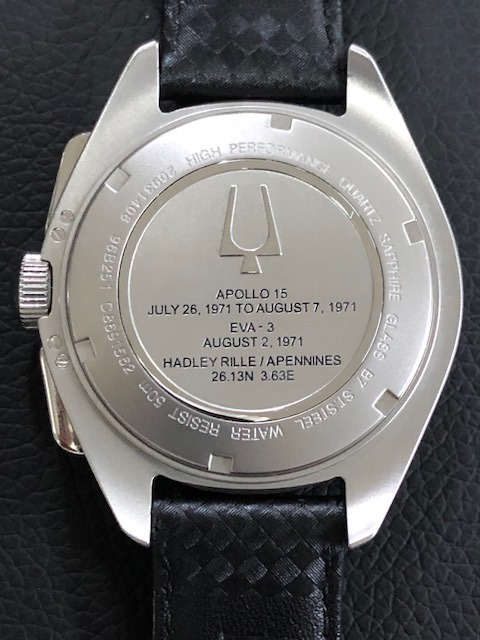 Back of a Bulova moon watch model stating the mission when it was used.