On prioritising pedestrians and promoting walking

We begin March with an excellent article that came out from curbed.com:

How do we improve the environment (i.e., facilities) to encourage people to walk? Do we simply clear up sidewalks? Widen them? Build overpasses and underpasses? What should be the context for improving pedestrian facilities for our cities and municipalities? What are the implications to planning and design?

I have a fascination for old maps. These include the stylised ones and even those that are considered mythical like the Piri Reis map. Here is something that’s real and old that the map enthusiasts among my readers maybe interested in:

You can download versions of the map though the good ones are quite big and slow to obtain if your internet connection’s not good.

Some nice articles on innovation in transport

Following are a couple of articles on innovation as applied to transport. Uber is often seen merely as a transport option much like the taxi but there’s more than meets the eye in terms of its operations never mind its surge pricing schemes. It has succeeded in much part because it is an innovative company with innovative people. They were not afraid to take on the challenges against what the establishment had regarded as an upstart in a sector that was seen as having fewer opportunities for thinking out of the box.

When we were residing in Singapore, it was so easy to book a taxi wherever we might be. Comfort Taxi’s booking system allowed us to get a taxi from our home to the airport or to avoid long queues at the mall by booking a taxi by phone and waiting for it at a designated stop nearby. With the arrival of GrabTaxi and EasyTaxi in the Philippines, getting a cab became a little easier and convenient though one friend opined that the app basically mainstreams the current practice of negotiating with the cab driver for the fees (usually higher than the meter fare for metered taxis) to be paid for a ride. Hindi pa kasama ang tip dito! This ‘negotiating’ is a ‘trial and error’ thing and in certain cases, there might not even be a negotiation for the fares as Metro Manila cab drivers are notorious for being choosy about their passengers and their destinations.

Here are a few screen grabs from a booking we made last month after having some difficulty getting a ride out of UP Diliman in Quezon City.

Information about the booking fees in various Philippine cities. The booking fee in Manila is conspicuously and significantly higher than those in other major cities. 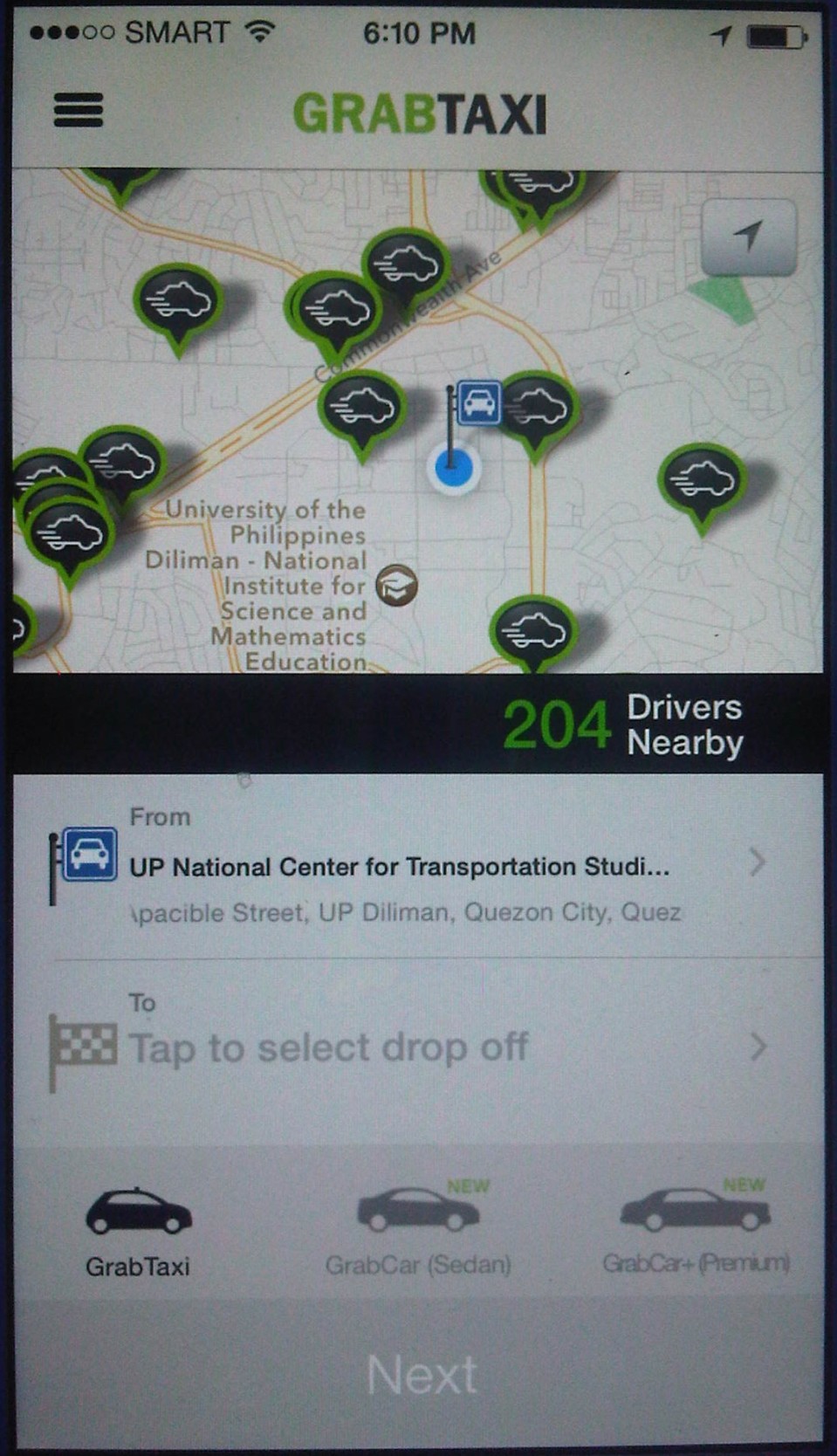 Grab Taxi’s interface shows the number of taxis nearby, which is apparently the number within something like a 4 or 5-kilometer radius of our location (204 is a big number!). We were at Melchor Hall at the time and the most convenient pick-up location was at the National Center for Transportation Studies, which was behind Melchor Hall. 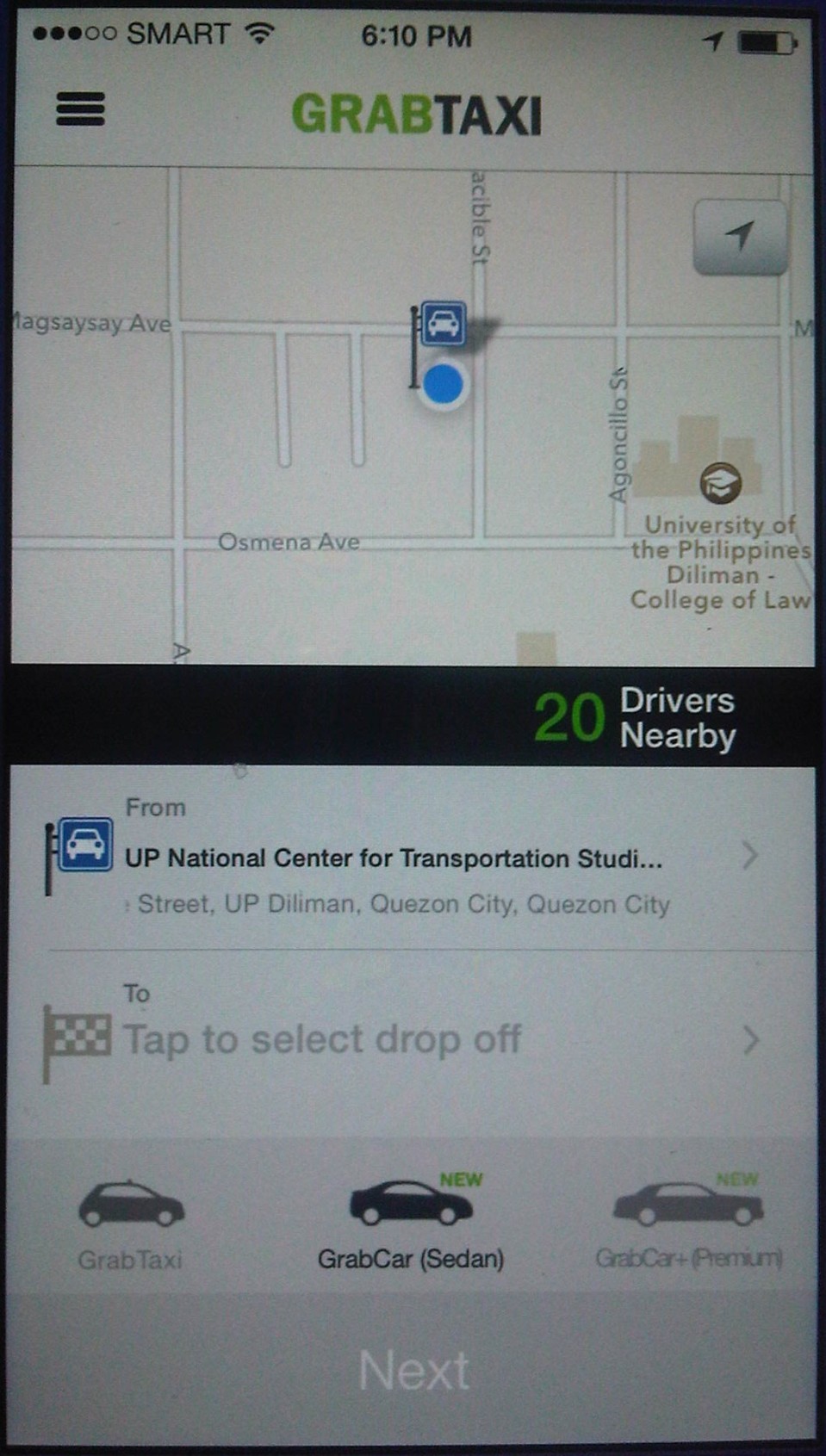 You can also check out the availability of more exclusive (and expensive) Grab services such as GrabCar and GrabCar Premium. When you slide to GrabCar, the status bar will also show how many drivers of that service option are nearby (i.e., 20 drivers nearby for GrabCar). GrabCar would be similar to the basic service (and vehicle) provided by the more popular Uber. 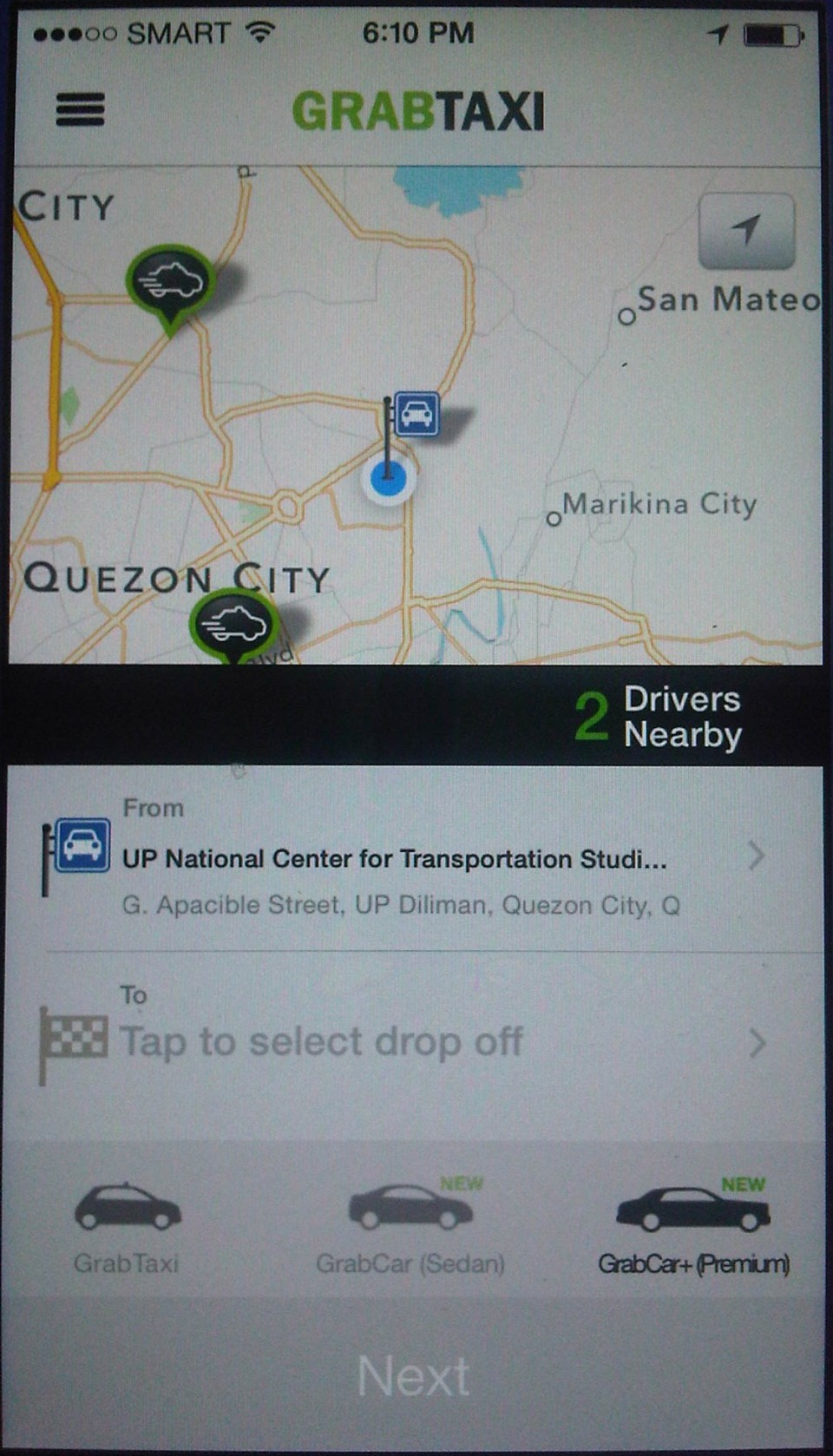 GrabCar Premium is probably the equivalent of the Uber Black Car service we have in Manila.

Another view of the user interface showing some (or many) of the 204 taxis nearby. 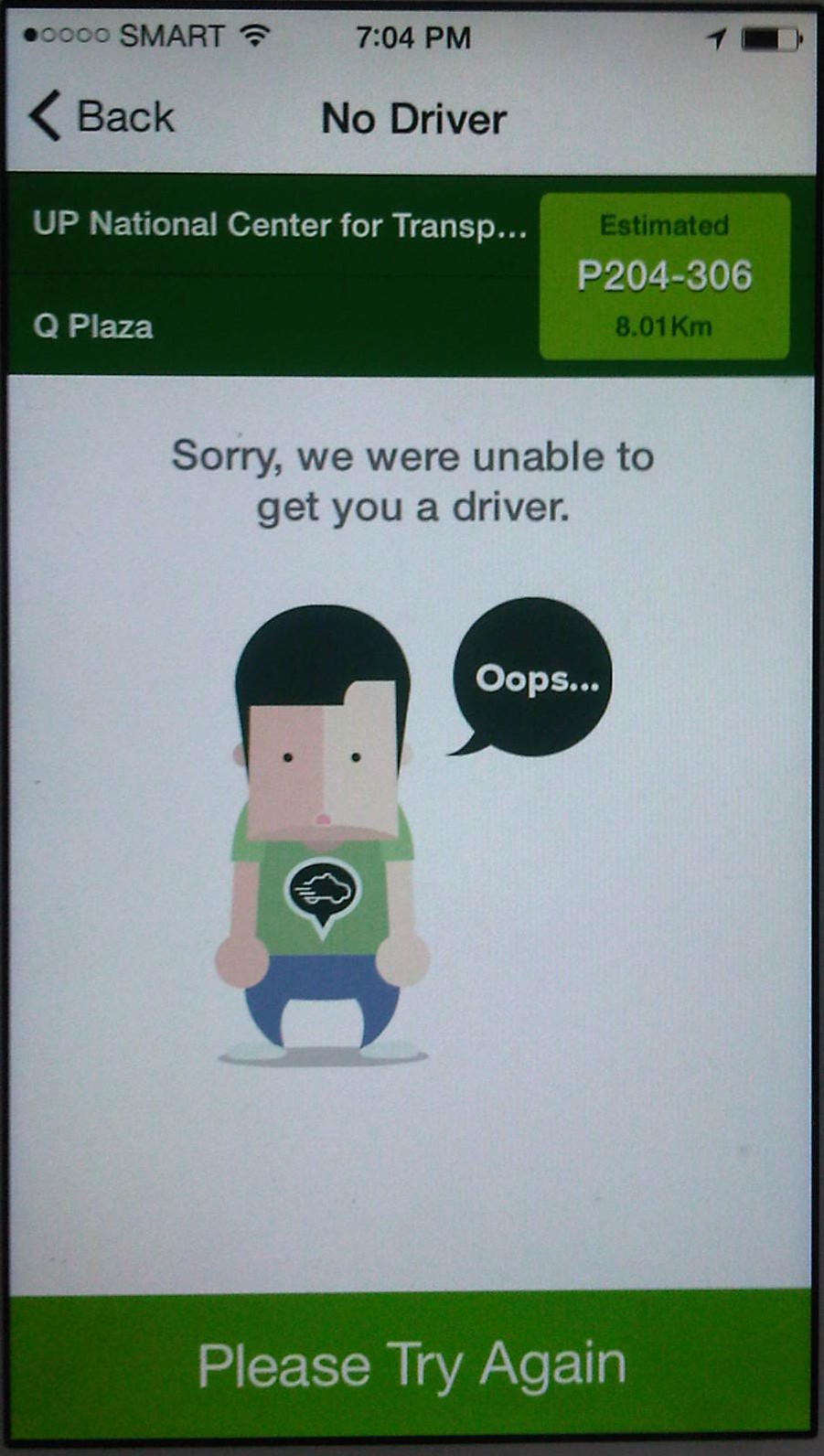 Here is an example of a message from GrabTaxi after it was unable to get a cab for us.

We were fortunate that the failed attempt at getting a cab was once only as we got a cab in our next try. This is despite all the cabs supposedly nearby. In reality only those who are willing to go to my destination from Quezon City will initially be interested in taking my request via the app. There is also a gratuity feature of GrabTaxi that allows the user to indicate how much he/she would be tipping the driver on top of the fare and booking fee. In the end, I guess my stating a very generous tip ensured my successfully getting a cab. For this, my friend’s opinion seems to be true that apps such as GrabTaxi mainstreams or makes the negotiations formal and a given when using the app. It, however, already eliminates the part where the prospective passenger gets turned down by the cab he/she hailed. When a cab responds to a request via GrabTaxi, EasyTaxi or even Uber, the driver already agrees to the terms of the deal regarding the ride. And it is a good thing that these apps now feature feedback mechanisms (e.g., rating the drivers) in order to weed out those that are still uncooperative, greedy or want to take advantage of the need for taxi service.

GrabTaxi now has a new service, Grab Express, which is an on-demand pick-up and delivery service. This is a service already provided by other companies in the US that are now giving traditional or conventional courier/logistic companies a lot of competition. I would think there is a demand for such services especially in cities where documents and other stuff still need to be submitted to offices like reports, manuscripts, letters and others that need to be delivered in “hard copy” format.

I recently came across a provincial bus operator who is promoting a device for limiting the speeds of vehicles. He states that all their buses are fitted with the device and together with an on-board camera and GPS, they are able to monitor their buses and ensure the safety and security of their passengers. It’s always good to know there are responsible and progressive bus operators like him. Unfortunately, his kind is a minority among many who appear to be after the proverbial quick buck rather than ensuring a high quality of service for travelers.

Devices limiting the speeds of vehicles are not new. These have been installed in many public transport and commercial vehicles like buses and trucks in order to regulate their speeds along highways and streets. Trucks from Japan are fitted with these devices and those second hand trucks being sold in the Philippines have these but are allegedly disabled by their new owners. They are not violating any laws here as there are no regulations requiring such devices to be installed in vehicles.

Tracking devices that include GPS are more recent technologies being used mainly by logistics companies to track their vehicles. These are particularly important for trucks laden with high value cargo or for delivery vans who schedules and routes need to be managed to ensure timely delivery of packages consigned to them. Data from these devices would allow for the assessment of driving speeds and behavior such as lane changing that can be used to determine if drivers are, for example, reckless. The same data can also be used to evaluate fuel efficiency.

Such devices also have research applications because data can be used to determine real-time traffic conditions. In fact, there have been probe car studies conducted in other countries such as Japan, Thailand and Indonesia where taxis were employed to gather traffic information along urban road networks (e.g., Tokyo, Bangkok, Jakarta). Similar experiments can be implemented for Philippine cities to derive traffic information that can be used to guide travelers regarding travel times and route planning.

Perhaps the DOTC through the LTO and the LTFRB, should look into the mandatory installation and use of these devices to regulate vehicle speeds for public and freight transport and also monitor driver behavior. Mandatory speed regulation devices as well as tracking systems have a high potential for weeding out reckless, irresponsible drivers that will ultimately lead to a reduction in road crashes that have resulted in serious injuries and loss of lives. Definitely, there will be objections or opposition to such a requirement but these devices can be justified given the clamor for safer transport and safer roads. After all, everyone of us are vulnerable road users where even the safest driver can be involved in crashes. It takes only one reckless driver or rider to cause a crash.

The National Center for Transportation Studies (NCTS) of the University of the Philippines recently received a very generous donation from the Manila North Tollways Corporation (MNTC), which has partnered with the Center in the conduct of training programs for its staff. The donation includes several software packages that would help the Center leapfrog from its modest capabilities and allow it to be par in as far as tools are concerned with government agencies and private entities who have acquired similar software.

Commercial transport planning and traffic engineering software such as those for travel demand forecasting and traffic simulation are quite expensive, and the Center has been using only old versions of TRAF-NETSIM, JICA STRADA and software developed by its staff using programming languages that are also taught by the several of its fellows. Perhaps the most recent acquisition of the Center prior to the donation is the CUBE transport planning software, which has been utilized to migrate the transport model for Metro Manila that was developed in 1999 using JICA STRADA. The latter effort was conducted in cooperation with the Department of Transportation and Communications (DOTC) with data gathered through various projects over the last few years to update the road network and traffic inputs.

Of course, there have been temptations before as there are bootleg software around but the Center has refrained from acquiring and using such software consistent with the University’s policy pertaining to intellectual property rights and acceptable use. Instead, we have encouraged our students to develop their own applications though some have been crude in terms of user interface. Still, these are effective for tools in their researches.

The donation includes academic versions of VISSIM (the same simulation software acquired some years ago by the MMDA followed by the DPWH) and SIDRA, which is for intersection analysis. Also acquired in the donation are full versions of the same SIDRA, Synchro with SimTraffic (also a micro-simulation software) and Anadelta TESSERA (highway design software). Soon to be delivered are a new version of the TSIS/TRAF-NETSIM software and accident analysis software (road safety). This is in addition to GPS units that were recently delivered and a LIDAR gun for speed measurements that will donated this year (2012).

Dr. Ricardo Sigua, head of the NCTS Road Safety Research Laboratory and a Professor at the Institute of Civil Engineering of UP, recently held a brief training session with our senior undergraduate students for using the VISSIM software. He gave them group assignments afterwards and already, there is much excitement among the students who have the opportunity to use top of the line software for their studies. We look forward to their presentations in two weeks time when they are to show the outcomes of their modeling work.

Dr. Sigua teaching students how to use the VISSIM at the Toyota Training Room – the tarp is a fixture from a training course held recently at the same room 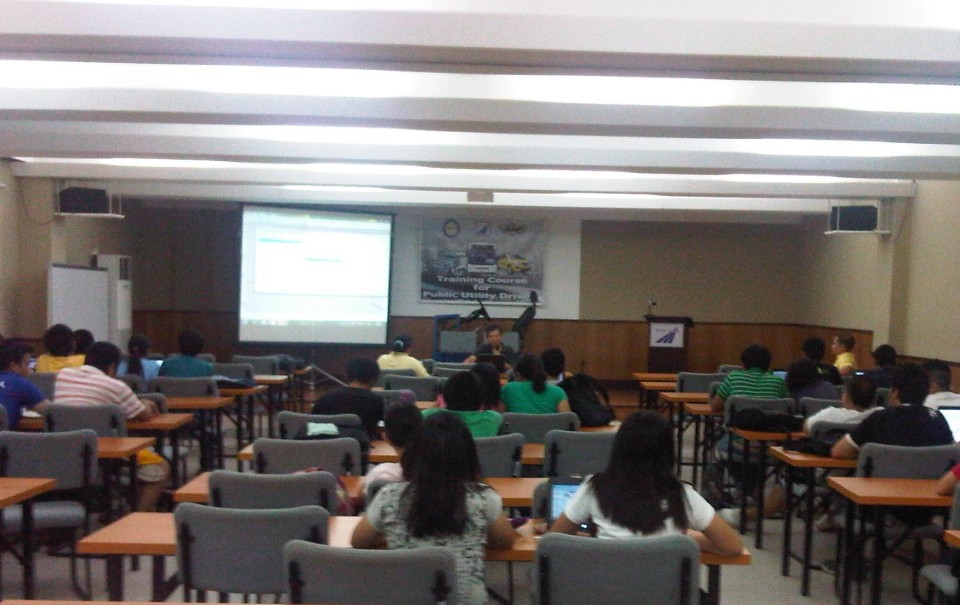 Unlike the past decades, many students now have their own notebook computers where they could install the student edition of the VISSIM software.