Walking back to the parking lot near Seda Hotel after my meeting near Net One Center yesterday, I noticed that the bike share rack near Krispy Kreme was empty of bicycles. I was about to rejoice but then I noticed, too, that the portal by which you can borrow a bicycle was also missing. Was it temporarily removed because of all the activities (Christmas season) that were ongoing at Bonifacio High Street? Or were the proponents already in the process of removing them? I hope it was the first or perhaps the second but only to relocate the rack elsewhere where it is more strategic and perhaps attract more people to use it. Meanwhile, a nearby bike rack for cyclists to place and secure their bicycles was full. This meant a lot of people actually took their bicycles to High Street but these were their own and not part of the bike share system.

I had been curious about the ADB-supported bike share initiative they called Tutubi since it was launched at the University of Sto. Tomas (UST) in Manila and at Bonifacio Global City (BGC) in Taguig. These have sophisticated portals where one can rent a bicycle by simply swiping or tapping your card unto the terminal. I finally noticed the bike station at Bonifacio High Street in BGC. I don’t know how I missed it since we are there weekly but then there are usually events in that area and the bike share station may have been obscured. Following are a few photos I was able to take as I watched our toddler walking about curiously and excited of the fountains and others she found interesting at High Street. 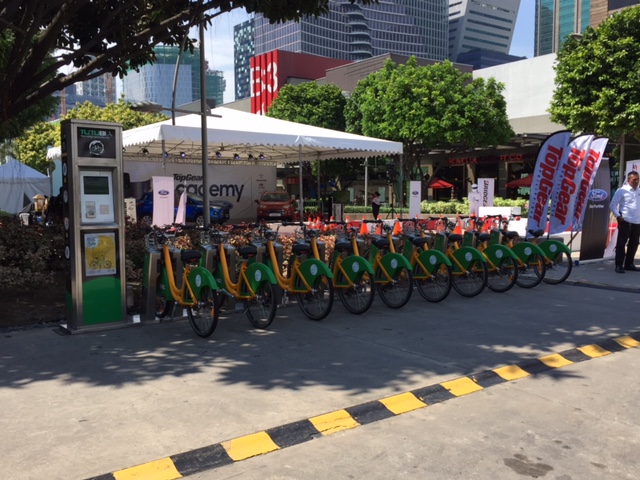 All the bikes seem to be here as not a slot was vacant. 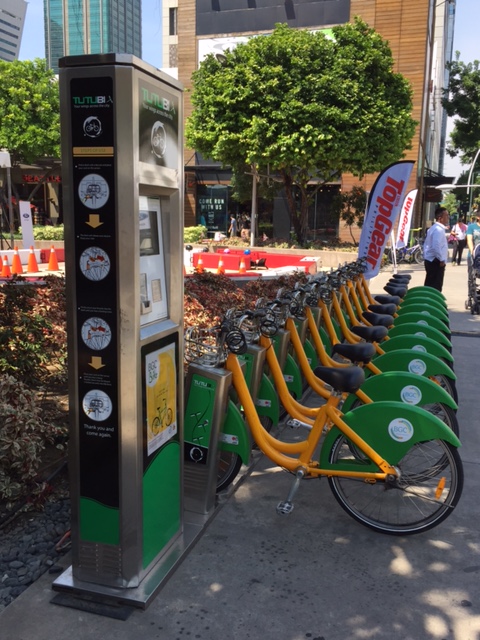 It seemed ironic to see not one bike in use against the backdrop banners of a popular motoring magazine. 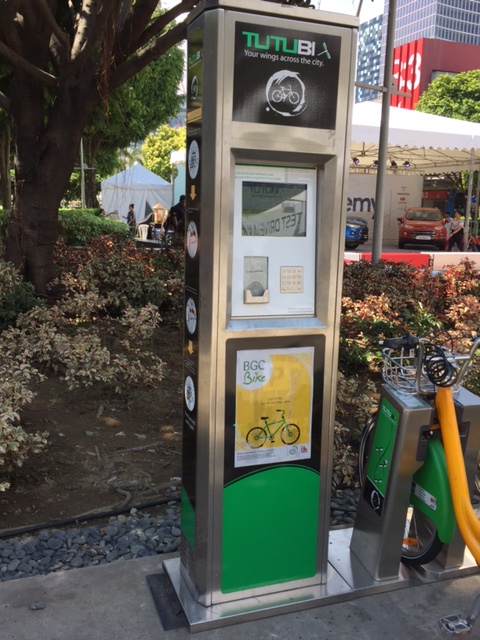 A closer look at the portal shows what looks like a new (unused?) facility.

It seems to me that there are few users of the Tutubi at least at Bonifacio High Street. I wonder if the bikes at UST are utilized more than the ones at BGC. I also wonder if UST is monitoring or studying bicycle use in its campus. Its use being limited within the premises of the campus sort of restricts users and diminishes utility. UST has a walkable campus and while its area is big (20+ ha) compared to other universities and colleges in the University Belt district, it is smaller beside Katipunan neighbors Ateneo De Manila University  (80+ ha) and the University of the Philippines (493 ha). The latter two are also “walkable” with UP having more park-like features and open to the public.

UP Diliman has its own Bike Share program run by students and (I might come as biased) these seem to be popular on campus as I see many of the bikes used by students to go around from one building to another. UP Bike Share currently employs a more conventional system including subscriptions for frequent users. There is, however, a Department of Science and Technology (DOST)-funded project through the Electrical and Electronics Engineering Institute of UP Diliman that hopes to develop a more sophisticated system for managing and monitoring the bikes. That project has just started so we might wait 1 to 2 years to see its fruits.