Here is a very interesting article on the beginning of Uber:

The article contains the company’s first pitch and should be of interest to researchers (that includes my students) who may want to know about and from the Uber’s origins. It might be useful to taxi operators and drivers as well since the slides show their characterization and what (good) features distinguished Uber from the conventional taxis at the time.

Vuchic (Urban Transit Systems & Technology, 2007) defines paratransit as an “urban passenger transportation service mostly in vehicles operated on public streets and roads in mixed traffic; it is provided by private or public operators and it is available to certain groups of users or to the general public, but it is adaptable in its routing and scheduling to individual user’s desires in varying degrees.”

On the Uber and Grab predicament

A lot has been said and written for or against Uber and Grab. Social media made sure the more popular but not necessarily the truthful ones are spread. One popular personality associated with motoring has even led an online petition against the rulings by the Land Transportation Franchising and Regulatory Board (LTFRB). An objective check of the facts reveal that LTFRB is not solely at fault here. Uber and Grab should not have promoted themselves and took in additional drivers (nagpaasa ng mga drivers) after the agency issued a moratorium last year. Estimates vary but it seems they have taken in tens of thousands of drivers (20.000? 30,000? 40,000?) and earned revenues along the way to what is now an historic penalty levied upon Uber and Grab by the LTFRB.

Perhaps the most level-headed article I’ve seen online is the following:

The thing about Grab, Uber and the LTFRB [by Vince Pornelos, July 18, 2017, https://www.autoindustriya.com/editors-note/the-thing-about-grab-uber-and-the-ltfrb.html]

It seems all is well, for now, as meetings were held between the DOTr, LTFRB and the concerned parties (Uber and Grab). In one of the meetings, a couple of Senators seem to have brokered a deal to resolve what appeared to be an impasse that a lot of people on social media reacted to. There are definitely a lot of vested (and veiled) interests involved here including those by various “operators” in the transport sector on both the sides of government and private sector. One takeaway though that I observed is that many appear to be against LTFRB even though the agency was truthful about their statements regarding the illegally operating transport vehicles. They seem to have made up their minds about the LTFRB and this is not surprising as transport problems have been festering for decades with little progress in terms of improving transport, conventional or innovative. Most people seem to have lost their patience about transport services and regulation, and perhaps this is a good thing if it translated to demanding for mass transit, too.

Praise and criticism about Uber

I found a couple articles on Uber. These are by the same author and are interesting because of some changes in perspectives considering the more than 1 year separating the two.

Uber’s Complicit Board [by Jean-Louis Gassee in mondaynote.com, Medium, June 26, 2017]

I’m posting these here as additional references on ridesharing/ridesourcing. Such perspectives are also invaluable for us doing research on these topics. I am not so much interested in the personalities but on the operations and the experiences and preferences of passengers.

Some nice articles on innovation in transport

Following are a couple of articles on innovation as applied to transport. Uber is often seen merely as a transport option much like the taxi but there’s more than meets the eye in terms of its operations never mind its surge pricing schemes. It has succeeded in much part because it is an innovative company with innovative people. They were not afraid to take on the challenges against what the establishment had regarded as an upstart in a sector that was seen as having fewer opportunities for thinking out of the box.

There are two articles recently that are worth reading for those who are into ride-sharing/car-sharing. And I am not necessarily referring to those who regularly take Uber or Grab, or those who opt to use these whenever they need a taxi ride. There are many who are already studying these services being provided not by your traditional or conventional taxi companies or rental vehicle companies but by supposedly private individuals who supposedly have the spare time and spare vehicle that they can use to provide transport for other people. I use the word “supposedly” here because this is a big assumption and the premise by which transport network companies like Uber, Grab and Lyft have been able to go around the bureaucratic processes that taxi and other companies have to go through as formal public transport (i.e., public utility vehicles). These articles are along the lines of the discussions in previous articles I have posted here about ride-sharing/car-sharing, and are mostly based on the experiences in countries who have more developed and presumably better transport than us in the Philippines.

I leave it up to my readers (any researchers out there?) to pick-up the main points and perhaps look at the issues from different perspectives. I have pointed out before that the situation in Metro Manila could be very different from the situations in other major cities like Cebu, Davao and Iloilo. And so transport network companies may not necessarily succeed in cities where taxi services, for example, are significantly better than what we have in Metro Manila.

A friend posted a photo on social media and it immediately got my attention as it featured an ad by popular ridesourcing company Uber on a public bus in Singapore. There is a slogan there that reads: “Because weekends come once a week, make your move.” This statement is a promotion for Uber, which is already making inroads in the city state where taxi services are probably among the better ones in the world in terms of service quality and efficiency.

The ad itself is a contradiction in terms of who is promoting itself and where it is being promoted. Such promotion gimmicks are not beyond companies like Uber, which project themselves as mavericks in what are considered as traditional areas such as transport. Here is the photo of Uber advertising on a public bus in Singapore: 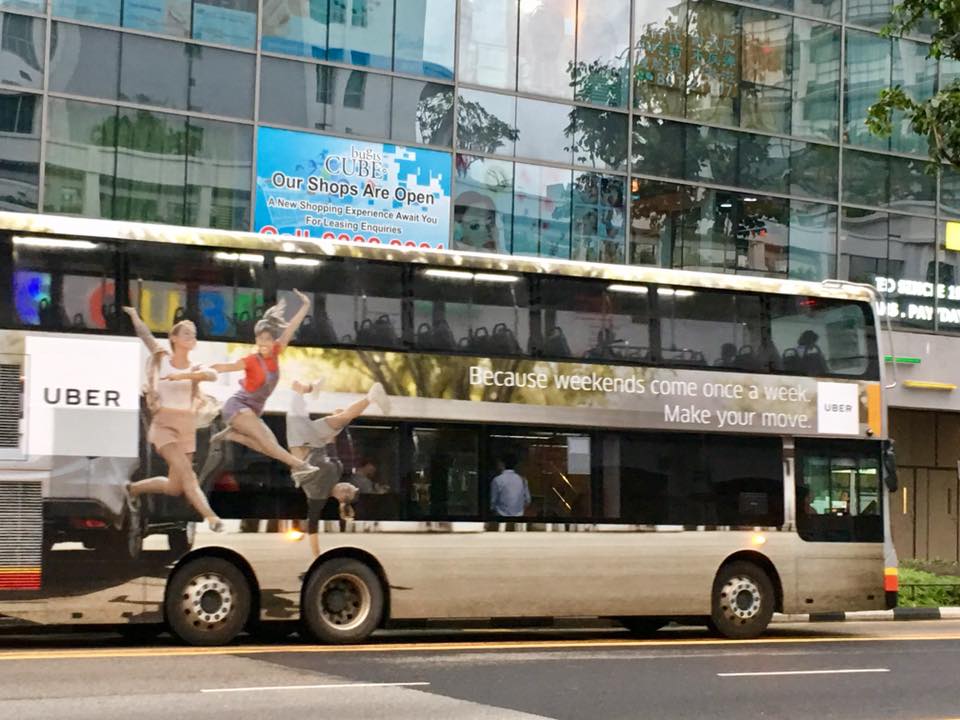 Taxi ownership and operations (i.e., driving) in Singapore is restricted to Singaporeans. Uber faced some issues with their operations as there were a significant number of foreigners, it seems, who took to Uber as a means for employment. In a city-state like Singapore, which discourages private car ownership and use through schemes like congestion pricing and the provision of high quality public transport services, Uber could face a much stiffer challenge to its march towards dominating conventional taxis.

Some views on Uber and Grab

I took screenshots of a DOTr social media post on Transport Network Companies (TNCs) and the comments made on the post. If the post is an accurate quote of the current LTFRB Chair, then it reveals how a top official of the LTFRB (and at the same time DOTr) thinks about such services and perhaps shows a lack of understanding for what these “innovative” companies are all about. I purposely put the word innovative in quotation marks because there are also challenges that Uber is currently facing.

But then can we blame the official and others of how they understand the business models of TNCs like Uber and Grab? Can we blame them when these companies’ models’ seem to be quite different from their original set-up that made them the popular modes that they are now in many countries? At the same time that they have become the bane of conventional taxis, it seems they are also killing off the good ones, too. In my opinion, Uber and Grab are treading a fine line between ridesharing/carsharing (their original model) and taxi services.

Here are some social media posts not too long ago regarding fare regulation being applied to TNCs: 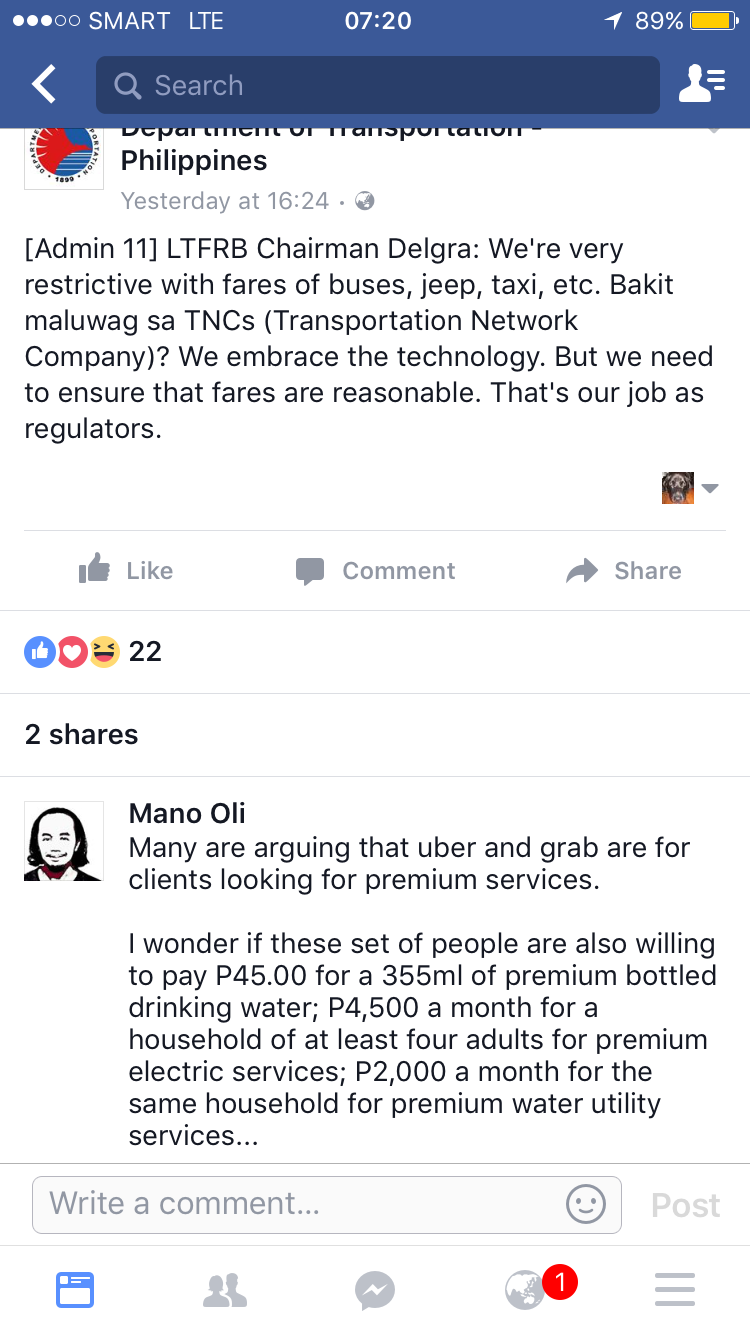 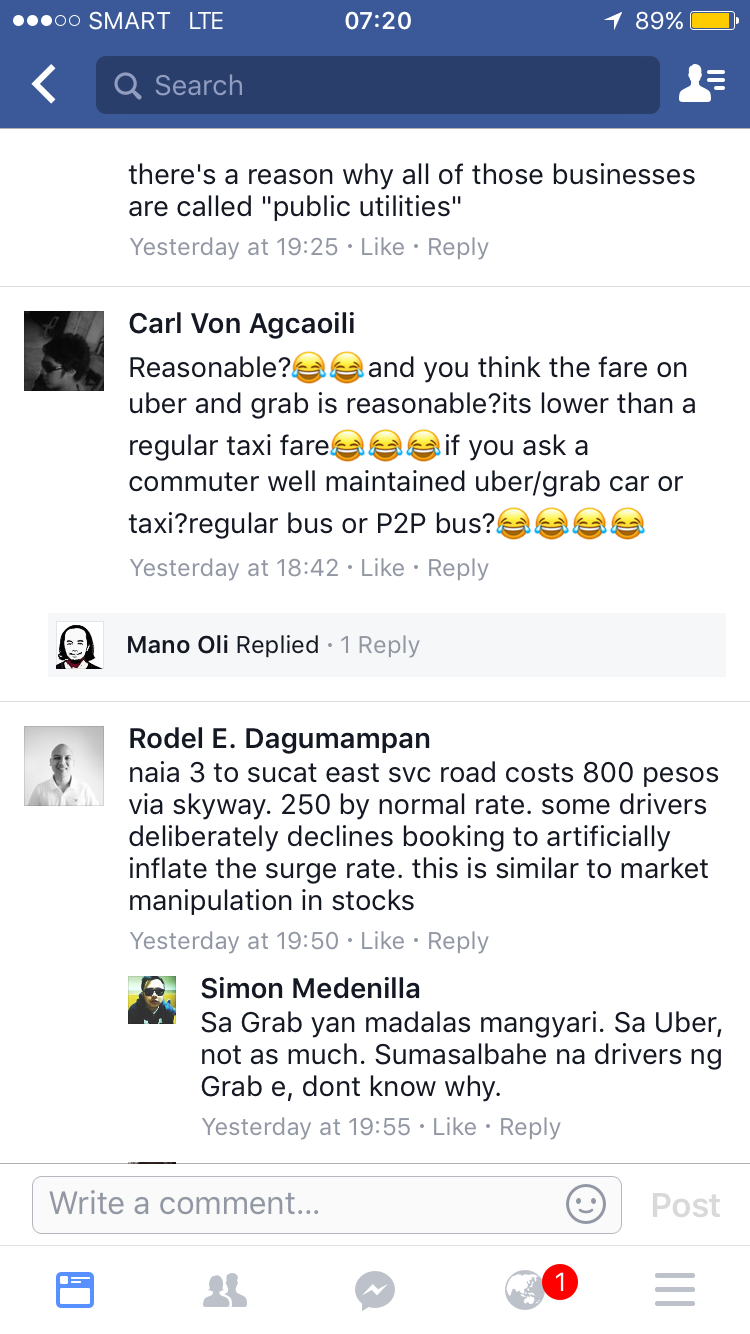 There are healthy (as well as inane) discussions online about TNCs. More recently, there were reactions when Uber appeared to take advantage of a nationwide jeepney strike. I guess people should take in different perspectives about TNCs and in the end, it is the commuters’ welfare that is important regardless of what modes of transport are available them. That welfare should be the priority of government and we should  not blame the latter when they are actually doing their jobs.

On transport, technology and politics

I frequently share articles I found to be interesting and intriguing. One of my current research interests is on ridesharing, ridesourcing and carpooling. And so when I saw this article online, I felt it had some good arguments pertaining to ridesharing considering these are all claiming to be

The article is by Konstantinos Dimopoulos and appeared on How We Get to Next last February 17, 2017.

The other TNCs – Wunder and Angkas

The Land Transportation Franchising & Regulatory Board (LTFRB) recently issued a couple of press releases pertaining to two Transport Network Companies (TNCs). The issuances were for Wunder and Angkas to cease operations. Copies of the press releases were posted at the Department of Transportation (DOTr) Facebook page and are reproduced here: 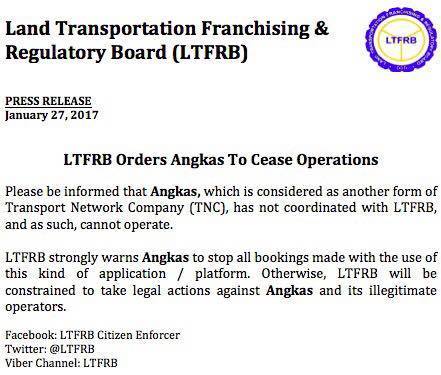 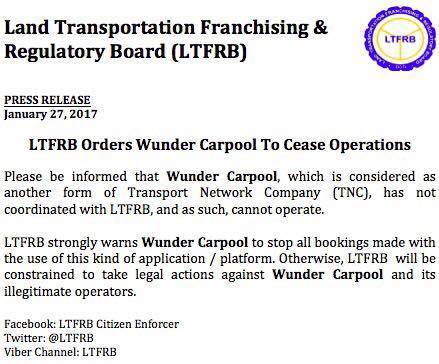 Prior to these press releases, both Angkas and Wunder have been aggressively promoting themselves in social media. Wunder is the more established entity and is actually based in Germany. Its operations are basically carpooling and match drivers with passengers traveling about the same time and along their likely routes between homes and workplaces/schools.

Angkas appears to be a locally developed app. The big difference here though is that it is for motorcycle taxi services. While it is clear that tricycles (3-wheelers = usually a motorcycle plus a sidecar) used as public transportation are under the jurisdiction of local government units, their operations are governed by national laws. These include tricycles supposedly being banned from operating along national highways. Motorcycle taxis are regulated along the same lines with LGUs having the responsibilities over their operations (refer to my previous posts on habal-habal and Skylab) and are generally tolerated in rural areas where there is a lack of motorized transport services available. As far as the national government is concerned though, motorcycle taxis are prohibited and this is due primarily to safety concerns. 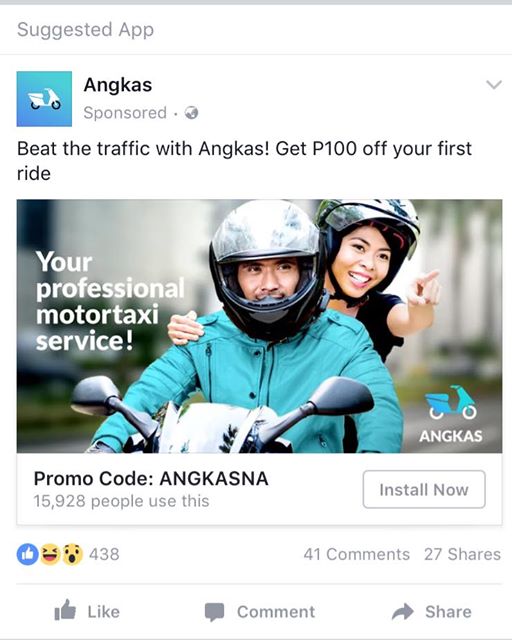 I don’t know where Angkas gets the “professional motor taxi” tag since it is most likely that riders offering their services are not at all trained or experienced to provide public transport services and on a 2-wheeled vehicles. Such operations are risky especially to passengers. Even in countries like Thailand and Vietnam where motorcycle taxis are generally legal, it is established that such transport modes are unsafe with motorcycles being involved in more crashes compared to other vehicles. Motorcycles also have a higher fatality rate compared to other vehicles.

I think Wunder is different and could actually be closer to the classic (or conventional) carpooling idea compared to ridesharing/carsharing leaders Grab and Uber. Wunder clearly states that its aim is to maximize the available seats for the two likely trips people make with their vehicles. These two trips are usually one in the morning (i.e., to the workplace or to school) and another in the afternoon or evening (i.e., to home). As such, the income derived from Wunder is limited to the 2 trips although a driver can maximize income by accepting multiple passengers. In contrast, many (not all) Uber and Grab drivers in the Philippines operate practically the whole day and are basically taxis. I would recommend that the LTFRB look into the operations and business model of Wunder and perhaps reconsider their decision against it.