Here’s another recent article about tires developed by NASA for their rovers. Obviously, the objective was to eliminate flat tires when you send them out to explore other planets or moons. The applications here, however, will have a big impact on vehicles including bicycles that have increased popularity in the last year partly due to the pandemic. These might definitely become game-changers particularly for those who bike commute.

Golson, J. (March 23, 2021) “These NASA-developed bike tires could be the last you ever buy,” Inverse, https://www.inverse.com/innovation/these-nasa-developed-bike-tires-could-be-the-last-you-ever-buy [Last accessed: 3/25/2021]

I had posted about the tires on my father-in-law’s newly acquired pedal assist electric bike. Here is what it looks like. Of course, rubber is still the basic material here so perhaps this will be replaced by more durable (indestructible?) material stated in the article above. 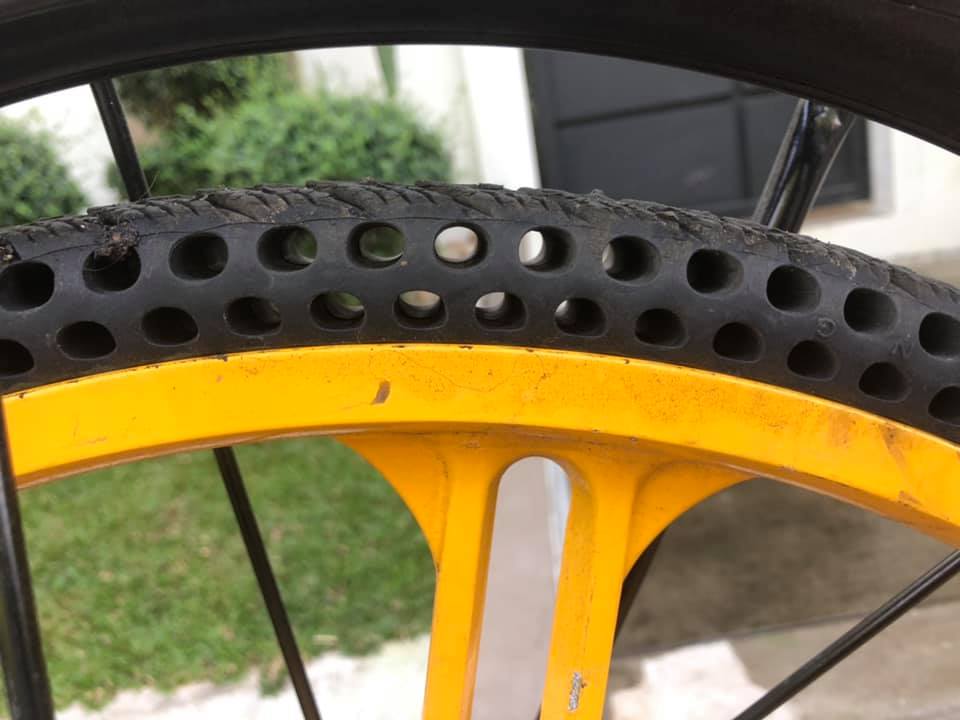 On teaching children how to ride a bicycle

After some hesitation, we finally decided it was time to remove the training wheels from our daughter’s bicycle. She’s enjoyed biking whether we walked alongside or were on our bikes, and she was already tall enough to stick out her legs to regain balance if the bike tilted to one side or the other. So we thought it was probably time to remove the training wheels so she will learn to bike on 2 wheels.

She’s a fast learner and after I pushed her a few times, she could already pedal ahead and straight. The turns took some time as she immediately stuck out a leg when she thought she would fall upon making a turn. The confidence grew and the following day she was already turning while keeping her balance. She now cycles every afternoon but we still forbid her to go by herself and beyond our eyesights. So we usually have one adult or our high-schooler to bike with her. Sometimes, her grandfather, who cycles at 78, also shadows her and gives her pointers.

The view as I followed her along one street in our neighborhood.

I always tell her to take the lane and not wander to the middle of the road or the edge of it. Our main worry is always the motor vehicles that tend to speed as if no one else is using the road. Some motorcycle riders are reckless and so are many car drivers. It is as if they were not driving/riding in a residential area. So we always remind our little one to position herself where she can maneuver to avoid these vehicles. And we always remind her to be aware of her surroundings as being alert will help keep her away from danger.

I think we should teach our children to bike at an early age. It is a very useful skill to learn and nurture, whether its for recreation, exercise or transport. She already knows how to swim, which was and still her preference over cycling. Our daughter was already biking (with training wheels) at 4 but it took some time for her to grow (she was really small for her age then) and gain strength. She just turned 7, and we think she can now out-pedal us if we didn’t ask her to slow down. 🙂 I think its time to get another bike, too, as the wife’s also returned to cycling in order to shadow our daughter. I’m usually left to run after them…

The pandemic and the resulting lockdowns led to people rediscovering what is now termed as active transport modes – walking and cycling. Not that these modes were not being used for travel as usually they, especially walking, represent the last mile/kilometer mode for most people. With the absence or lack of public transportation or service vehicles (e.g., free shuttles for frontliners, office service vehicles, etc.), many people turned to cycling. Perhaps one area outside of commuting where bicycles have plenty of potential (and I use the word ‘potential’ here because it is not yet as widespread as motorcycle use) is for delivery services. It is the general perception that there has been a surge in deliveries for various items especially food from restaurants. Why not employ bicycles either to supplement or augment the usual motorcycles used for such purposes? I took the following photos showing an example of deliveries using bicycles. 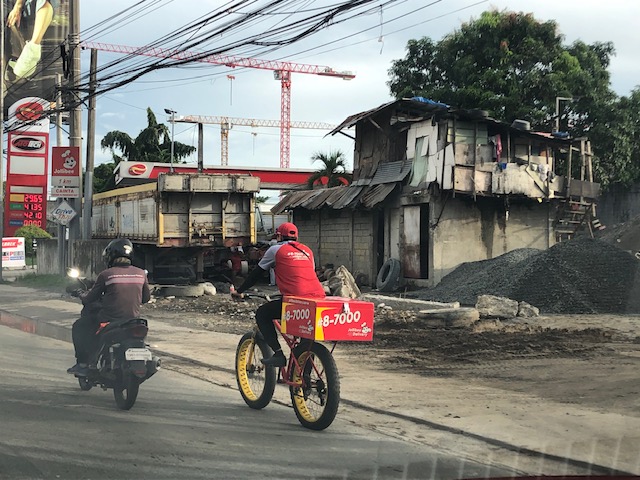 The bicycle rider compared to a motorcycle rider – the bike is just about the same size as the motorcycle, only higher/taller due to the large wheels on the bicycle. The carrier or box is also larger than the typical carrier as it is for transporting food that can be of a large quantity or even multiple orders if these are in close proximity to one another. 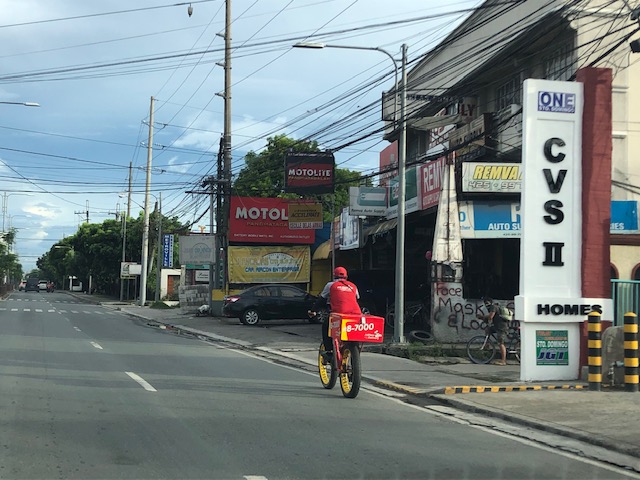 Fast-food delivery via bicycle along Felix Avenue in Cainta, Rizal

The term ‘sharrow’ basically short for shared right-of-way and refers to lanes or roads that are ‘designated’ for all modes of transport including and especially non-motorized ones such as bicycles. It also refers to the lane markings. There have been some mixed experiences and opinions about sharrows; particularly referring to whether they are effective. Here’s an article from the director of technology of Smart Design, which is a strategic design and innovation consulting firm in the US that gives another opinion (an evidence-based one) about sharrows:

I guess the experiences in different countries vary according to several factors. Perhaps these include cultural factors that also relate to human perceptions and behavior? Education is also definitely a factor here aside from awareness. And we have to work harder on these and together, rather than play the blame game on this matter that relates to safety. How many times has the observation that Filipinos tend to regard road signs and markings as merely suggestions rather than guides and regulations?

What if our government officials used bicycles for their commutes?

Here’s another quick share of an article about cycling:

The Dutch have perhaps the densest bikeway network in the world as shown in the article and the link below showing bike lane maps. They also have a government that is pro-bicycle. You wonder what transportation and infrastructure would look like if our government officials biked to work or used public transport on a regular basis. Perhaps these will affect how they make policies and decisions pertaining not just to transport but on housing and health as well? It would be nice to see a counterfactual discussion or paper on this and other scenarios that could help us improve transport and quality of life. This is a big “what if” that many people are actually clamoring for so government can be grounded in the way they make plans and decisions.

Here is the link to Open Cycle Map, which is affiliated with Open Street Map:

On bicycles and transit

Here is another quick share of an article on bicycles and transit (i.e., public transport):

What do you think? Are we getting there in terms of the bicycle-transit relationship? MRT and LRT lines have allowed foldable bikes to be carried in their trains but buses and other road-based public transport may not allow you to bring your bike inside the vehicle. For the latter vehicles, there are usually racks installed in front of the vehicles that can accommodate 2-3 bikes. Train stations now should have bicycle parking facilities for the last mile trips of their passengers.

On bicycles slowing down cars

There is a perception that cyclists tend to slow down other vehicles, mainly motorized, along roads. Again, such can be the experience of some that have been generalized and accepted as fact in most cases. However, if we look closely at the evidence, the perception may not be true for most cases after all. This article comes out of Portland State University:

Check out the wealth of information through the links found throughout the article that includes references to published material in reputable journals. EurekAlert! is from the American Association for the Advancement of Science (AAAS).

On the bicycle as the future of urban transport

Here is another quick post where I am sharing an article on the bicycle as the future of transport:

I’ve posted about this idea before here and on social media. While some people were engrossed or obsessed about self driving cars, I was asking them how this could be the future of transport when all this leads to is more cars on the roads, and perhaps roads designed to accommodate these vehicles. The evidence vs. self driving cars was already there and the pandemic only emphasized how this could not be the future of transport. Instead, we have something more basic and not even motor-powered – the bicycle. Come to think of it, there is also walking. But then the bicycle is more energy efficient and can take you over longer distances than your feet.

Why cycling or bicycles are good for the economy?

You saw that meme shared in social media where they say “why bicycles are bad for the economy”? There’s some humor there but it doesn’t necessarily convince many people to support cycling or biking over motor vehicle use.

Here goes one and note the logic:

“Cycling or bicycles are good for the economy because…it helps reduce car use/dependence. That means less dependence and expenses to fossil fuels. That means more money available to the household for more important stuff like food, homes and education.”

Workers on bicycles crossing the Marcos Highway bridge from Marikina towards Quezon City.

The research was supported by the American Association of State Highway and Transportation Officials (AASHTO) in cooperation with the Federal Highway Administration (FHWA).