Home » Academe » Establishing an ITS society in the Philippines

Establishing an ITS society in the Philippines

The establishment of an ITS society in the Philippines is an idea that’s almost 2 decades old. I first learned about Intelligent Transportation Systems (ITS) while I was a graduate student at UP Diliman taking up transportation engineering in 1994. The interest was stoked by more exposure to ITS when I studied in Japan later and participated in the ITS World Congress held in Seoul, Korea in 1998. I presented a paper at the congress and was able to go around to look at the cutting edge in technology at the time that was applied to transportation. I also learned that there were three big ITS organizations at the time – one in the US (ITS America), in Europe (ERTICO) and in Asia (VERTIS).

I recall attending one meeting in 2002 when Dr. Ricardo Sigua, then on his second stint as Director of the National Center for Transportation Studies of the University of the Philippines Diliman presented the idea to a group that included then Department of Electrical and Electronics Engineering Chair Rowena Guevarra. The latter is now Executive Director of the Department of Science and Technology’s Philippine Council for Industry, Energy and Emerging Technology Research  & Development (PCIEERD). At the time, the conclusion was that it was still premature for the Philippines to establish a formal ITS society considering that there were few who were actively involved in ITS research. I thought privately that people still had little understanding or appreciation of ITS and, at UP at least, we were not yet in an environment that enabled collaborative work among departments who are supposed to have the expertise to undertake ITS related research and perhaps be the core group for a society.

Flash forward to the present, there is an ITS program currently being funded by the DOST-PCIEERD and under it are several research projects. One project is already underway and is being implemented through a collaboration among civil engineering (transport), electrical and electronics engineering and computer science faculty and students of UP Diliman. There are also several projects in the pipeline from Ateneo, DLSU and Mapua. These researches combined with various ITS applications with the private sector (e.g., electronic toll collection, variable messages, apps for commuting, etc.) means there is much more awareness nowadays for ITS and its benefits. This may also mean that the time is right and ripe for an ITS society to be established to further its applications. 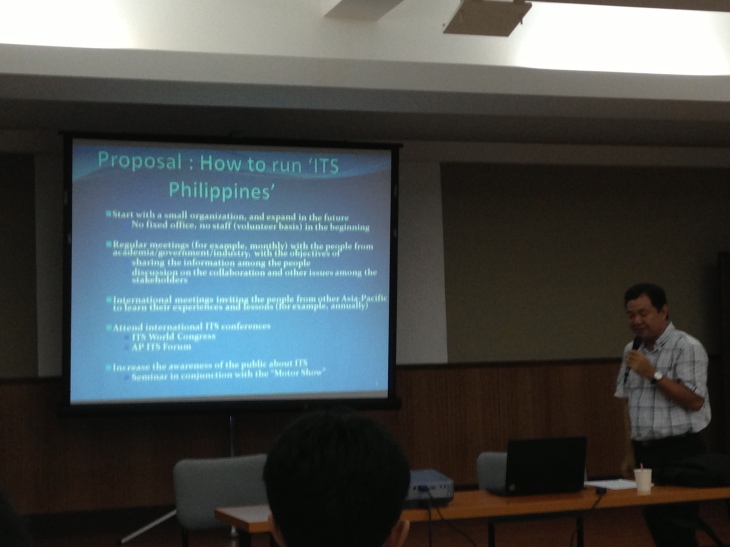 Dr. Ricardo Sigua of the UP College of Engineering presenting on the proposal for the establishment of ITS Philippines.

On the forefront of the establishment of an ITS society in the Philippines is Dr. Ric Sigua, Professor at UP Diliman’s Institute of Civil Engineering and Fellow at the NCTS. He has been very active in ITS research and is currently project leader of the Philippines Manila Advanced Traffic Information System (PhilMATIS) project that is funded by the PCIEERD. Dr. Sigua has strong links with ITS Japan and is representing the country as observer in the regular ITS Congresses including the one to be held in Tokyo in October. During the ITS forum hosted by the NCTS in September 4, it was agreed that a core group will be established that will work towards forming a formal society. This will be led by the academe but will have the support of the private and government sectors. We look forward to what may be called ITS Pilipinas or ITS Philippines in the near future.

By d0ctrine in Academe, EST, ITS on September 22, 2013.
← Pedicab regulations How to cite social media →