I spotted a jeepney on my way home with a message (or tagline, depending on how you see it) printed on its side. It says BEEP, which was supposed to stand for Bagong Jeep (translated as New Jeep). From the looks of the vehicle, there was nothing new about it, except maybe this sign that was painted over an older design on the vehicle’s body. Apparently, the tagline does not refer to the vehicle itself but to the image of the jeepney. “Bago” or “New” here refers to a new image for jeepneys. Long regarded as the “King of the Road,” the jeepneys have become synonymous to reckless driving, uncomfortable rides and unreliable services. They have also come to represent unsustainable transport what with most jeepneys being fuel guzzlers and smoke belchers.

I already spotted several jeepneys plying the Cogeo-Cubao route sporting this sign that’s apparently a campaign to uplift the image of jeepneys. It seems really a stretch to call these ‘bago’ as the vehicles I’ve seen are the same customized bodies with second hand engines running them.

There is a campaign to rehabilitate the image of the jeepneys and perhaps it should start with driver behavior and not necessarily the vehicle. Many jeepney drivers (as well as drivers of other public utility vehicles) have attitudes leaning on the rude side. You see many of them driving recklessly along our roads and stopping just about anywhere (e.g., in the middle of the road). Such behaviour is due to many factors including the way these people learned to drive and their motivations for their means of earning a living. Much can also be said about their education both formal and regarding their driving.

There are also many vehicles vying to be the replacement for the jeepneys and among these are electric vehicles including the electric jitneys that I have featured in past articles on this blog. Incidentally, one of those electric jitneys is actually a more recent model of the electric jeepneys that’re currently in operation in Makati and Alabang, and it happens to be called the Beep. Operating in Filinvest City, the e-jeepneys there have been lauded as a viable option for replacing the conventional jeepneys. So far, so good and time will tell if indeed, conventional jeepneys will be phased out in favor of e-jeepneys. The jury is still out there in terms of the e-jeepney’s reliability and durability. 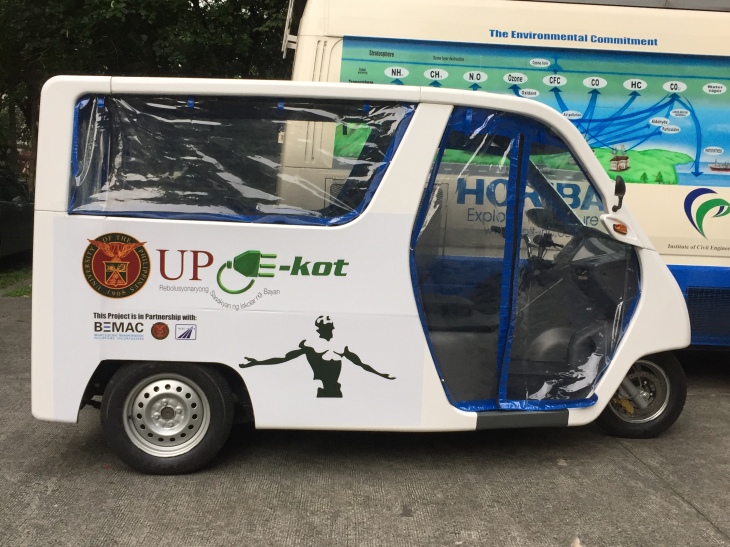 An electric tricycle currently undergoing experimental operations at the University of the Philippines Diliman campus is more a replacement for tricycles and multicabs than for jeepneys.

By d0ctrine in Electric Vehicles, Jeepney, Paratransit, Public Transport on August 27, 2015.
← Transport in times of rains and insensitive statements Running out of answers? How about congestion pricing? →