Two years ago, I wrote about Antipolo being ripe for high capacity public transportation. So far, work is progressing along the Line 2 Extension to Masinag but there’s no word about it being extended further (Cogeo? Marikina?). I have always maintained that the demand in Cogeo, Antipolo is already established and a mass transit line terminating there will certainly be a game changer in terms of commuting. In fact, it may contribute to rapidly developing that area and hasten the development of Antipolo’s government centre, which is a few kilometres further along Marcos Highway. 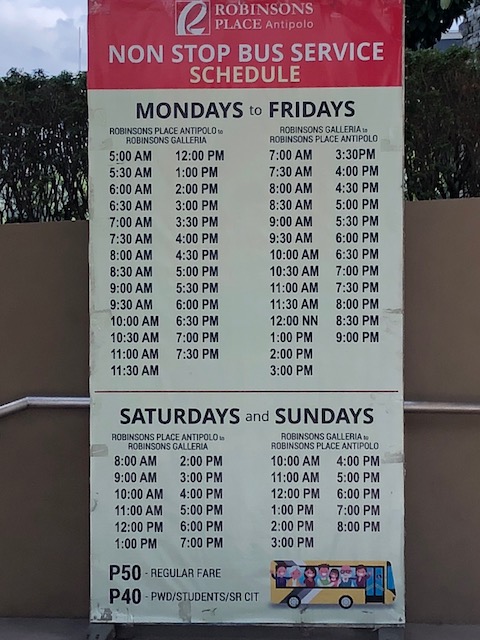 Schedule and fares for the P2P bus service between Robinsons Place Antipolo and Robinsons Galleria in Ortigas Center.

There is now a P2P bus service between Robinsons Place Antipolo and Robinsons Galleria via Ortigas Avenue. And then there is the newest P2P service between SM Masinag and the Makati CBD. The first has very limited capacity at present and have few patrons (regular passengers) based on what I’ve observed and the rough survey my students did for a class project. I still have to see the second one from SM Masinag but I assume it has a higher demand considering a lot of people already commute from that area to Makati. I say so because there’s a nearby UV Express terminal that’s always crowded with people every time I pass by in the morning. This should also translate into demand for the afternoon/evening period. However, I am not so optimistic about the off-peak periods (I hope I’m wrong!) as most P2P services my students have surveyed so far indicate really low occupancies during the off-peak periods.

Is P2P the way to go for Antipolo (and its neighbouring towns like Cainta, Taytay and Marikina)? I think this is still basically a stop-gap measure and a mass transit line as well as complementing conventional buses would still be the most suitable for these rapidly and steadily growing areas. Ortigas Avenue is ripe for a high capacity system that should perhaps be grade separated. The demand was there more than two decades ago. I seriously believe that the Province of Rizal, the City of Antipolo and the high-earning Municipalities of Cainta and Taytay should exert more effort and lobby for a mass transit line serving the Ortigas corridor.