Home » Governance » On tricycle capacity in the time of COVID-19

On tricycle capacity in the time of COVID-19

With the current rationalization and modernization of public transport vehicles and services being implemented by the national government, many jeepneys, mostly the conventional or traditional ones, have been unable to ply their routes again. Along some routes, buses have taken over but have been limited in the number of passengers they could carry due to physical distancing restrictions. But these are mostly for routes and roads that carry people between their residences and workplaces that typically are longer distance trips (e.g., more than 4 kilometers one way). For shorter distance trips, the more relevant mode of motorized transport is the tricycle. The conventional trike in the Philippines is one involving a motorcycle with a side car. Side car designs vary around the country with some seating 4 people (e.g., back to back with 2 facing backward) but usually with only two seats inside the cab. one or two passengers can be accommodated behind the driver on the motorcycle.

New model trikes include the models endorsed by the Asian Development Bank for the e-trike project that is laid out like a small jitney with benches seating 3 to 4 people on one side (total 6 to 8 passengers) and the popular tuktuk designs that seat 3 people at the back. With the quarantine restrictions in place, conventional trikes can only take one passenger inside the sidecar and none behind the driver. Tuktuks can seat 2 behind the driver but with a barrier (usually a plastic curtain) between the passengers. 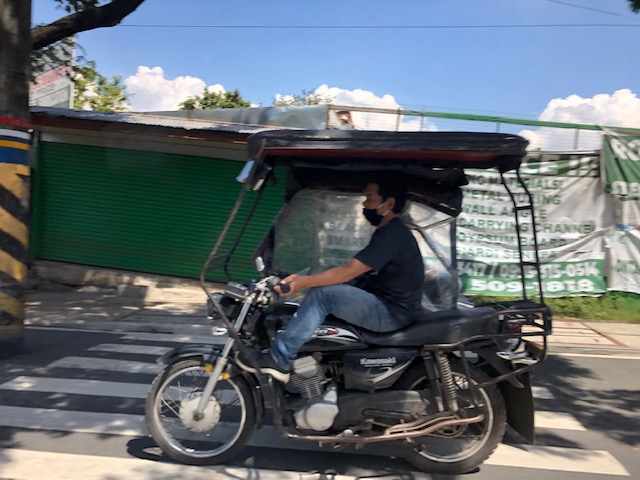 Conventional or traditional trike with plastic sheet between the driver and the passenger (in the side car). 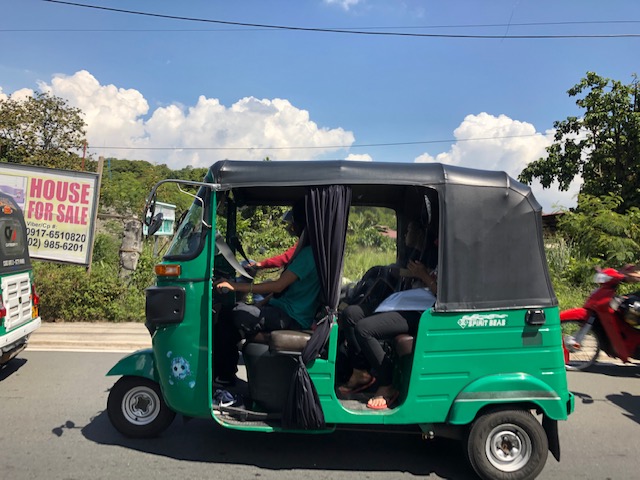 Tuktuk-type trike with plastic sheet between the driver (in front seat) and passengers in back seat. The back seat allows for 3 people seated together but due to distancing requirement

I have been informed by a former student that certain e-trike models (e.g., BEMAC model e-trikes) are allowed to carry 4 passengers, 2 each on the benches behind the driver who is on the front seat. That still means less passengers than they could usually carry. This would seem to be part of the new normal and will be the set-up for the foreseeable future until perhaps a vaccine for COVID-19 is approved and people get vaccinated. Then, health protocols may be eased to allow for the full seating capacities of public transport vehicles.

By d0ctrine in Governance, Health, Paratransit, Policy, Public Transport on July 16, 2020.
← Alternatives for the delivery of public transport services in the new normal On the bicycle as the future of urban transport →