Ortigas Avenue traffic is very familiar to me.  For one, I have used the road since childhood because it was the most direct route to and from school. We lived in Cainta and I went to school for 11 years in Mandaluyong. Before that, I even have memories of the section of Ortigas Avenue where Valle Verde phases are now located being carved quite literally from the adobe mountain that it was back in the mid 1970’s.  Ortigas was the only access for those living in the east, particularly the Antipolo-Cainta-Taytay-Binangonan-Angono towsn of Rizal Province, for quite some time. Marcos Highway was still a dirt road and Marikina and Cogeo were somewhat out of the way. Meanwhile, Ortigas was already an important corridor as it led to Antipolo, an important religious and popular recreational site.

As the populations of the Rizal towns I mentioned increased, mostly due to their proximity to Metro Manila and being popular for residential developments then as now, Ortigas became congested. The avenue itself was widened but as any traffic engineering textbook will tell us, the bottlenecks were really the bridges. And I also remember the Rosario Bridge across the Pasig River being widened twice, both before the Manggahan Floodway was constructed. I experienced the impacts of both widening endeavors and did not enjoy having to wake up earlier than when I usually did because of the horrific traffic. It was worse,  I guess, when the Manggahan Floodway was being constructed and there were too few options as to alternative routes. In fact, there were too few bridges across the floodway and Pasig River.

Nowadays, traffic congestion along Ortigas Avenue seem much worse than before. This I get from my siblings who still use the corridor as part of their routes to their workplaces. I trust in their assessment considering that my brother went to the same Mandaluyong school I attended and my sister attended another exclusive school in Pasig. My sister’s husband attests to the worsening traffic as he’s also lived at a residential area along Ortigas. From firsthand observation, I can also validate that Ortigas is worse these days than say 10 and 20 years ago.

The counterflow scheme along Ortigas is not new. In fact, my father and our school service drivers  knew about this and would often time their trips to coincide with the scheme so that they can drive almost continuously to their destinations in the morning. Back then, I remember that the counterflow scheme was in effect for 10 to 15 minutes at the 0630, 0700, 0730 and 0800 times. It was also actually a regulated one-way scheme and was called thus since it benefited vehicles traveling along the outbound (from Rizal) direction. Inbound traffic were stopped at strategic points along the avenue including Rosario Bridge.

Such schemes are possible only when there is a dominant direction during the peak hours. In the case of Ortigas the directional distribution before was practically 90% outbound in the morning peak. A one-way, counterflow scheme was possible and practical for an undivided road. There were no medians or island to prevent vehicles from moving over to the opposing lane and back. That was then and at a time when I suppose that there were less friction along the avenue. Road friction, particularly those caused by public utility vehicles stopping for passengers, is more serious these days as the number of PUVs have also dramatically increased to address the demand for travel. Only now, there seem to be more informal terminals and longer dwell times at strategic points along Ortigas. These cause the bottlenecks that are also complicated by Ortigas now having median barriers along its length.

I believe congestion can be significantly alleviated by developing and implementing a simple dispatching system for PUVs along strategic points like the designated loading and unloading zones at either ends of the Manggahan and Rosario bridges. The dispatching system should be implemented along with a strict enforcement regime to ensure quick boarding and alighting times and prohibiting PUVs from spilling over and occupying other lanes, that often results in blockage of general traffic. Perhaps, a counter-flow scheme may be re-evaluated and become unnecessary. This recommendation comes in the heels of a survey we conducted along Ortigas only yesterday, February 10 in Manila, where I personally experienced PUVs making a terminal out of the outbound lanes before the Manggahan bridge and effectively blocking outbound traffic along the avenue. I can imagine the frustration of those caught in traffic along Ortigas and its implications along the extension and the Imelda and Bonifacio Avenues from Cainta Junction. The result of that blockage and the implementation of a counterflow around 0715 is shown in the following two photos I took. 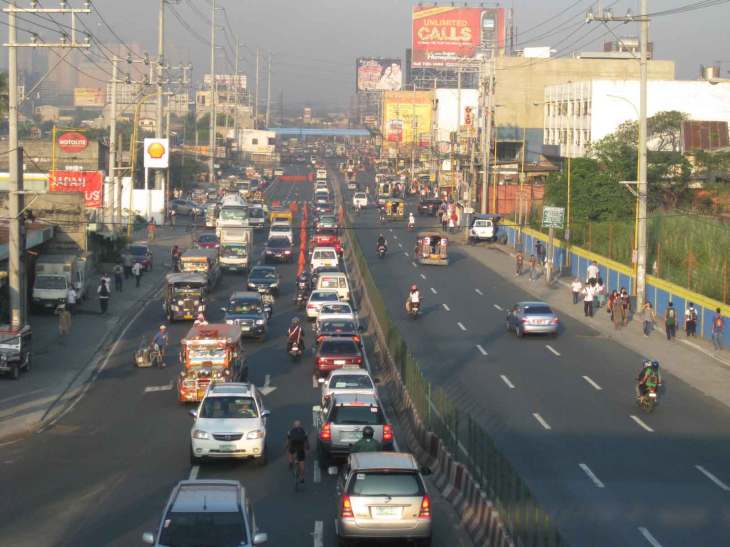 Figure A: Image downstream along Ortigas Avenue (to Rosario Bridge and C5) 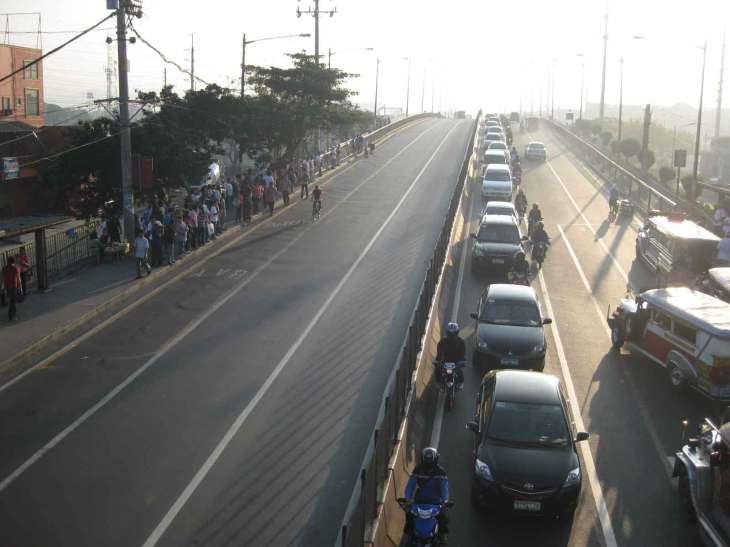 Figure B: Image upstream along Ortigas Avenue (from Cainta Junction)

It is clear from the photos that private vehicles were the ones who benefited from the counterflow. However, it is interesting to see that the outbound lanes were practically empty especially along the Manggahan Bridge. This clearly shows that there is actually enough road capacity but that it is not utilized (and counterflows were required) because of the blockage caused by PUVs upstream of our position. This is another strong case for going back to the basics in as far as traffic engineering and management is concerned. It does not take a PhD degree to see what’s wrong in the photos and certainly an advanced degree is not required for a solution to the problem.