I start the year with a short feature on the Automated Guideway Transit (AGT) prototype at the University of the Philippines Diliman (UPD) campus. The prototype has been featured in a number of articles in quad media in the recent weeks of November and December after its delivery and a few runs along the elevated test track at the campus. A project of the Department of Science and Technology (DOST) through its PCIEERD and MIRDC, and in cooperation with UPD, the vehicle has caught the attention of the general public and particularly those who have advocated for better public transport services in Metro Manila and other Philippine cities. Many are excited about the prospects of a “home-grown” system being constructed and operated in Metro Manila, and the buzz about the AGT replacing the IKOT jeepneys of UP Diliman is still very much alive despite clarifications by both the DOST and UP about this being a R&D project as well as questions regarding sustainability and practicality. Following are a few photos of the AGT prototype during one of its demonstration runs last December.

View of the test track from the platform – note again the absence of rail tracks as the AGT employs rubber tires. Wheels travel along the two concrete guideways shown in the photo. That’s the CHED building along C.P. Garcia Ave. downstream from the position of the AGT 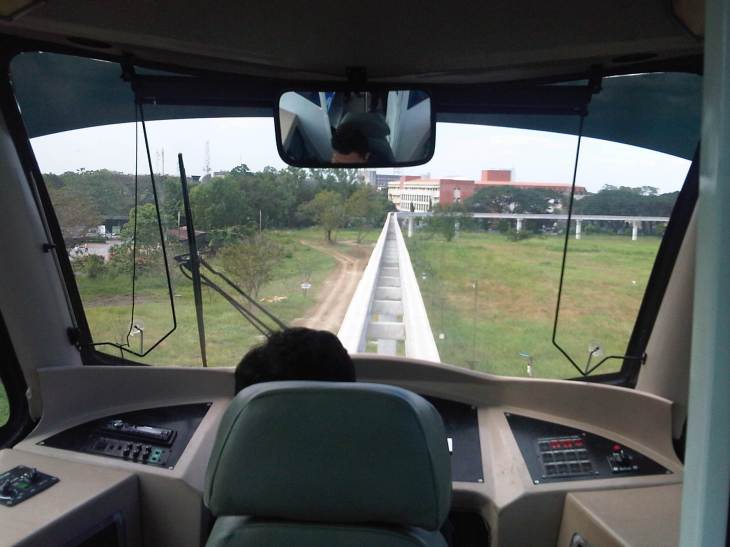 Driver’s perspective of the test track – the vehicle will eventually be driver-less (hence, automated) but for the test runs, there will initially be a driver to make sure the train operates correctly

Connection – the two prototype vehicles are connected by this crude assembly that is definitely one of the things that would need to be reconsidered in subsequent vehicles. Perhaps an automatic coupler should be installed in the future?

Dr. Ric Sigua of the Institute of Civil Engineering inspecting the pick-up system for the AGT prototype with DOST project staff.

DOST-PCIEERD and UP Diliman faculty (from the Institute of Civil Engineering, Department of Mechanical Engineering, Electrical and Electronics Engineering Institute and School of Urban and Regional Planning) exchange ideas on the prototype. 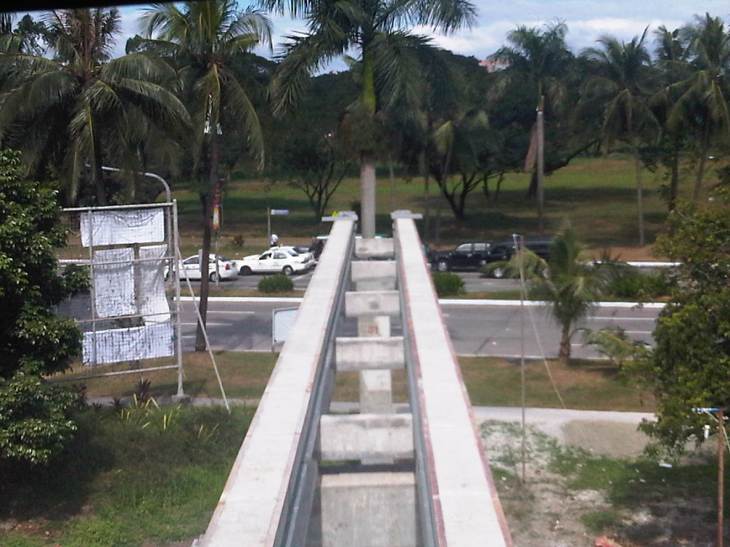 The initial runs of the AGT have been exclusive demonstrations to government officials including those in national agencies, guests from the private sector, and partners with UP Diliman. The formal test runs will start in January 2013 but there are still no details on how these will be carried out in order to determine the functionality and safety of the prototype. Already, there are informal discussions on what needs to be improved in the prototype based on the initial observations and inspections conducted by faculty members from UP Diliman’s College of Engineering who will be involved in the technical evaluation of the prototype. Hopefully, such evaluations can be completed at the soonest and improvements are considered prior to a full system eventually being constructed and made available for public use. Where that system can be constructed and operated is still up in the air but should definitely be somewhere where the system is needed and where it can be a showcase for localized technology.