The National Center for Transportation Studies (NCTS) of the University of the Philippines Diliman (UPD) is part of the Phase II of a research comparing the performances of customized local road vehicles (CLRV) for use in public transport. This project is being conducted together with the Vehicle Research and Testing Laboratory (VRTL) of UPD’s Department of Mechanical Engineering (DME), Electrical and Electronics Engineering Institute (EEEI) and the National Engineering Center (NEC) with funding from the Department of Energy (DOE). Phase II considers a longer route for the comparison of vehicles. In the previous Phase I, the route was UP Diliman-North EDSA while in this phase, the route will be Lagro-Cubao, which is significantly longer in distance compared to the previous study route.

Here are the specs for the BEEP, which features some significant design changes from the earlier versions of the e-jeepney: 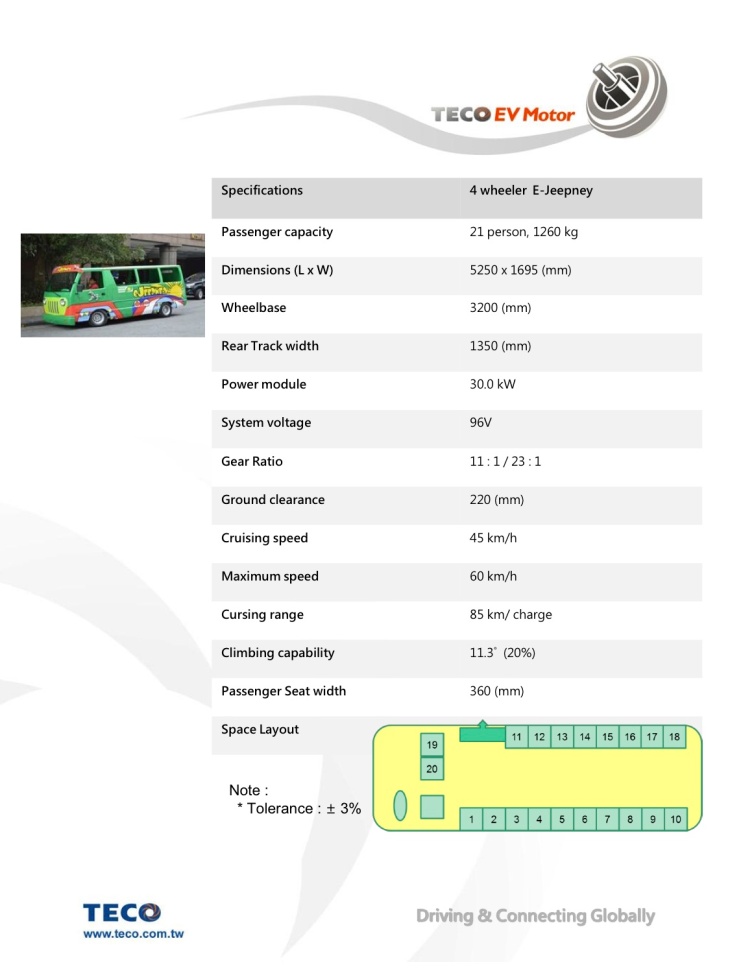 It is worth noting the following for the BEEP:

1. The door is already located on the side of the vehicle instead of at the back.

2. The motor is rated at 30kW, a significant upgrade from the 15- and 20kW motors in previous e-jeepneys.

3. The seating capacity is for 20 passengers (excluding the driver) by about 2 to 4 people from previous e-jeepney models.

These are the most obvious changes in the BEEP and would be factors that could affect its performance and acceptability. Most jeepneys these days are “siyaman” meaning they seat 9 passengers on each of the bench seats plus 2 on the front seat for a total of 20 passengers. Also, jeepneys should be able to negotiate steeper slopes that have been among the problems for e-jeepneys. Not mentioned are the specs of the batteries and the charging time although the range claimed for a full charge is 85 km. This study will hopefully validate these claims and show us if the BEEP will be up to the challenge of replacing the conventional jeepneys on long routes.