Home » Bridges » Another look at the San Juanico Bridge

Another look at the San Juanico Bridge

We have an ongoing project with the City of Tacloban and recently we went around the northern part of the city where many relocation sites were established after the onslaught of Typhoon Yolanda (Haiyan). After doing our fieldwork, we decided to cross the San Juanico Bridge into Samar island where we were told there’s a nice restaurant sitting atop a hill in the town of Sta. Rita.

Despite the rains, we managed to get some photos of the breathtaking views. Among these were this photo of the bridge as seen from Samar. Leyte and Tacloban are behind the bridge. 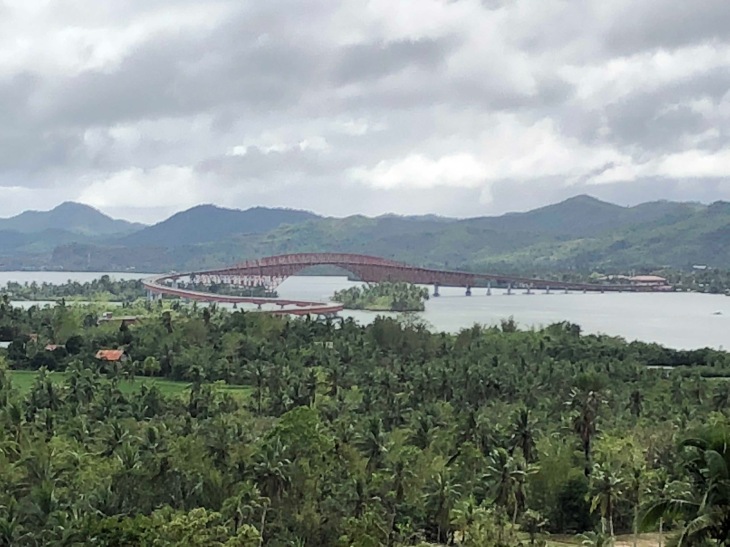 It is said that the part of the bridge on the Samar side has that distinctive ‘S’ shape while the Leyte side is a simple ‘L’ form. Trucks are weighed before they get on the bridge and the DPWH maintains a weigh station for this purpose before the Samar end. I didnt notice any from the Leyte side. Perhaps this is because most loaded trucks come via Samar rather that from Leyte?

Traffic along the San Juanico is usually light. This is despite the route being part of the eastern spine or nautical highway that is also part of the Asian Highway network. This leads me to suspect that similar (but longer and more expensive) bridges proposed for connecting other islands are unnecessary and cannot be justified when compared with other more urgent infrastructure projects including those that wil address urban congestion and promote improved mobility. The latter are more urgent and meaningful than massive structures that fewer people will use and benefit from.

By d0ctrine in Bridges, Highways and Streets, Infrastructure on January 7, 2018.
← On the other uses of ridesharing/ ridehailing services A quick look at the BFCT in Marikina →