In a previous post, I talked about the recent developments concerning the PNR and provided an historical perspective of railway development in Luzon Island, particularly focusing on the Main Line North and its branches. The MLN, of course, is no longer operating with proverbial nail in the coffin hammered by the eruption of Mt. Pinatubo in 1991, when lahar buried much of what was left of the lines in Pangasinan, Tarlac and Pampanga. Various initiatives have been put forward since the 1990’s to revive a portion of the MLN but in the form of a rail service connecting Clark with Manila. This is the Northrail project that has seen so much anticipation because of its promise of finally reviving railways for Central Luzon by providing access to what is being touted as the future main international airport at Clark, the Diosdado Macapagal International Airport (DMIA). The continuing saga concerning what seems to be a struggle in putting up Northrail is certainly worth another post. Meanwhile, we focus on the Main Line South for today’s feature. The figure below illustrates the extent of the MLS, significant sections of which have been rehabilitated. 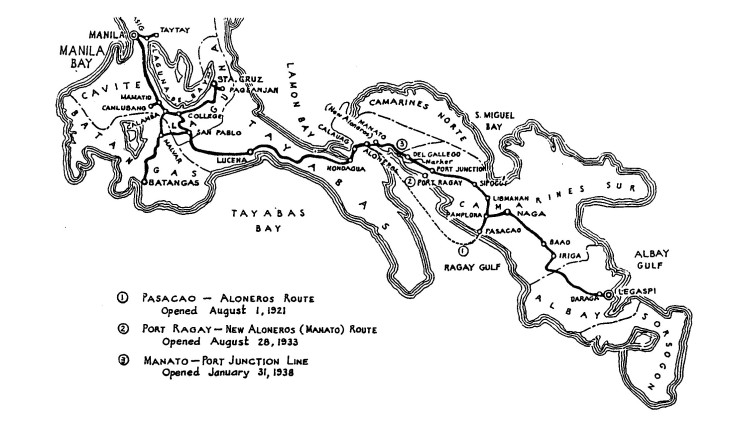 The MLS was constructed starting in the early 1900’s and can be quite tricky to establish given that many refer to it also by another familiar name: the “Bicol Express.” The invention of the latter term though was only applicable from 1938 when the first trains finally traversed the entire stretch from Manila to Legaspi, Albay. Construction for the southern line and its branches started in Manila and included the rail developments in Batangas, Cavite and Laguna that was later extended all the way to Aloneros in Guinayangan, Quezon. From here, it finally linked up with a line that started construction in Legaspi and proceeded northwards along the Bicol region until Ragay, Camarines Sur. (Reference: Corpuz, 1999 and PNR)

The PNR continues in the rehabilitation of its tracks and stations along the MLS and has already re-activated trips between Manila and Naga with trains leaving the stations at 6:30 PM and arriving at the other end about 12 hours later. The news mention sleeping cars and other amenities already available on these trains, and hopefully, the Bicol Express will run all the way to Legaspi before the year ends. Such are very encouraging and exciting developments for a system that is essential yet has seen only neglect in the past decades. Hopefully too, the developments are sustained and we shall reap the benefits from a revitalized rail system in Luzon.