San Francisco has an extensive public transport system with the combination of buses, LRT’s and cable cars allowing its citizens and visitors both accessibility and mobility for much of the city. A friend says that the objective Muni set out to accomplish was for anyone using the system to be able to alight from a public transport vehicle at most one block from one’s final destination. A block already represents a very comfortable walking distance well within the 200 to 300 meters radius often mentioned by public transport planners for the catchment areas of stops or stations.

SF’s Muni operates several types of buses including what are probably among the last electric trolley buses in the world. 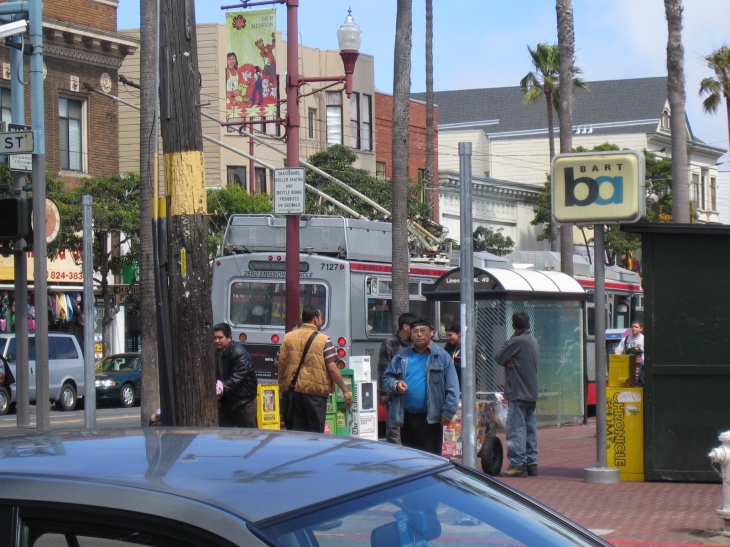 That’s a trolley bus in the photo above stopping near the BART station where I was waiting to be picked up by a friend. Note the flexible, long pantograph that is used to pick-up electricity from the overhead cables. The photo was taken in 2007 during a previous trip to the Bay Area.

Following are three photos I took back in 2007 at an intersection across the Balboa Park BART Station, where I thought I hit the jackpot in terms of watching the Muni’s various transport modes pass by. Think bird-watching but replace the birds with buses and LRTs.

The typical Muni bus has a number designating its route that can easily be found in transit maps to guide regular commuters and visitors alike. Most buses I saw had bicycle racks located in front of the bus that would enable cyclists to bring along their bikes during a long commute. Most buses these days run on natural gas. On the far right of the photo, one can get a glimpse of a LRT vehicle.

LRT vehicle coming out of the depot  – the rails are embedded on the pavement and allow for the mixed use of roads by motor vehicles and LRTs. 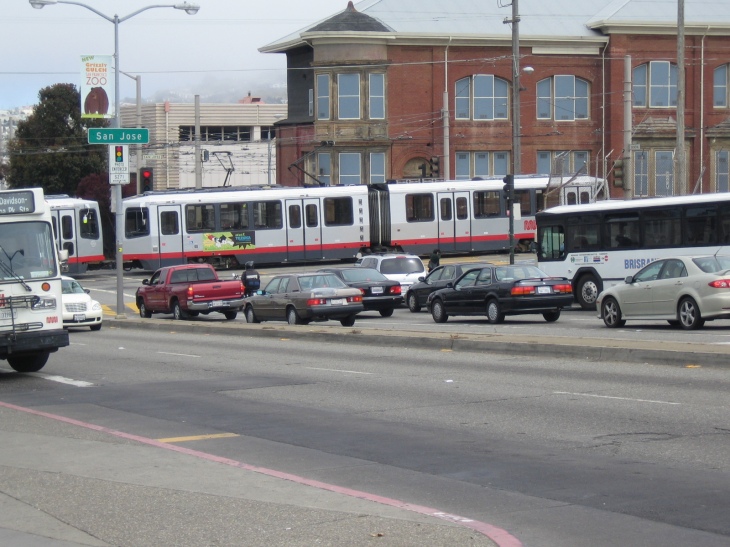 LRT crossing the intersection. LRTs are given priority at intersections and the traffic signals are programmed to facilitate the flow of these high capacity public transport mode. This is a reflection of prioritization of public transport over private transport, which should be the case rather than the other way around.

Inside a bus in San Francisco, there are seats provided for the elderly and the physically challenged. Entrance is via the front door where a passenger must first pay for the ride or show his pass for the driver to see. Exit is via the back door, which is wider to allow for the efficient unloading of passengers. To stop the bus at the designated stops along the route, a passenger should push a button (on the newer buses) or pull on a cable (on older buses) to activate a signal for the driver. To open the rear doors, one need only to push the bars across the doors.

Another look at the interior of a Muni bus. Although the bus appears to be old, it is clean/tidy. There are the occasional vandalism and there are signs asking passengers to report incidence of vandalism on the bus. There are also signs stating that conversations may be recorded and that the bus is under video surveillance. These seem to be standard security features of public transport in the US especially after the incidents of 9/11. Such information is welcome considering everyone would prefer to travel safely.

By d0ctrine in Public Transport, Transport Planning on December 12, 2011.
← Truck weight limits in the Philippines Mission accomplished: the Commonwealth – Quirino link up →