Manila recently banned provincial and city buses from entering the city stating this is because many of them do not have franchises and/or terminals in the city. Those without franchises are the ones labeled as “colorum” or illegally operating public transport vehicles, which really don’t have a right to convey people in the first place. It’s become difficult to catch them because many carry well-made falsified documents. But it’s not really an issue if the LTFRB, LTO and LGUs would just cooperate to apprehend these colorum drivers. The LTFRB and LTO are under the DOTC, and so the agency is also responsible for policies and guidelines to be followed by the two under it. LGUs (and the MMDA in the case of MM) are tasked with traffic enforcement and so they can apprehend vehicles and act on traffic violations including operating without a franchise.

Those without terminals are both city and provincial buses. For city buses, this can be because they  “turnaround” in Manila and operators do not feel the need to have a formal terminal. For example, G-Liner buses plying the Cainta-Quiapo route will stop at Quiapo only to unload Quiapo-bound passengers, and then switch signboards and proceed to load Cainta-bound passengers as they head back to Rizal. There is very little time spent as the bus makes the turnaround. It’s a different case for provincial buses, whose drivers should have the benefit of rest (same as their vehicles, which also need regularly maintenance checks) after driving long hours. Thus, if only for this reason they need to have formal, off-street terminals in the city. Following are photos I took near the Welcome Rotunda en route to a forum last Friday.

Commuters walking to cross the street at the Welcome Rotunda to transfer to jeepneys waiting for passengers to ferry to Manila.

Commuters and cyclists moving along the carriageway as there are no pedestrian or cycling facilities in front of a construction site at the corner of Espana and Mayon Ave. 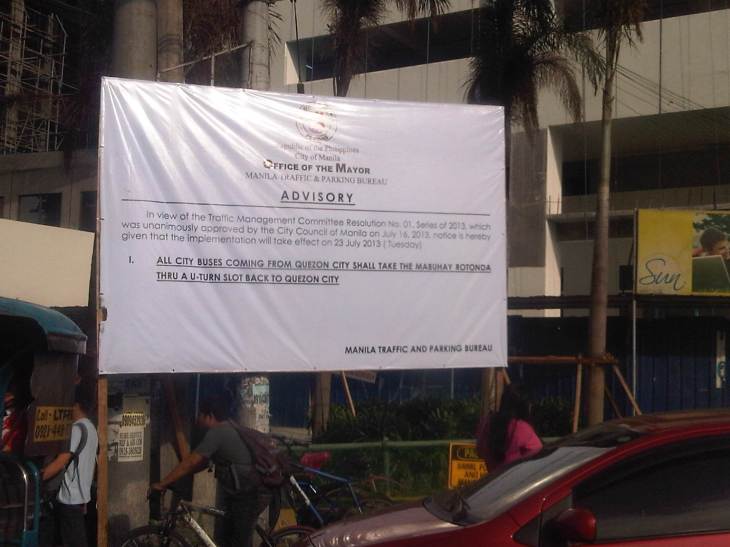 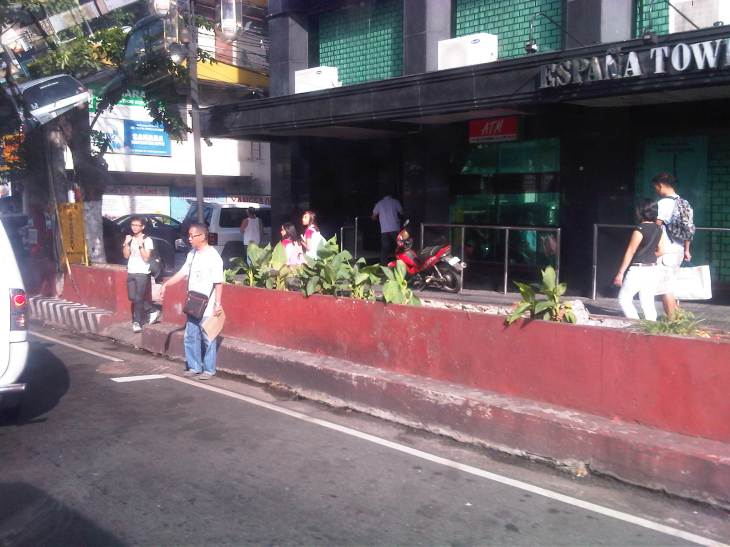 Some pedestrians opt to walk on instead of waiting for a ride. Manila used to be a walkable city but it is not one at present. Many streets have narrow sidewalks and many pedestrian facilities are obstructed by vendors and other obstacles.

So, is it really a move towards better transport systems and services in Manila or is it just a publicity stunt? If it is to send a message to public transport (not just bus) operators and drivers that they should clean up their acts and improve the services including practicing safe driving, then I’m all for it and I believe Manila should be supported and lauded for its efforts. Unfortunately, it is unclear if this is really the objective behind the resolution. Also, whether it is a resolution or an ordinance, it is a fact that the move violates the franchises granted to the buses. These franchises define their routes and specify the streets to be plied by buses. Many LGUs in the past have executed their traffic schemes and other measures intended to address traffic congestion, without engaging the LTFRB or at least ask for the agency’s guidance in re-routing public transport. Of course, the LTFRB is also partly to blame as they have not been pro-active in reviewing and optimizing PT routes.

One opinion made by a former government transport official is that this is just a ploy by the city to force bus companies to establish formal terminals in the city. This will require operators to secure permits, purchase or lease land and build terminals. And so that means revenues for the city and perhaps more traffic problems in the vicinity of the terminals just like what’s happening in Quezon City (Cubao) and Pasay City (Tramo).

Transport planning is a big part of the DOTC’s mandate and both the LTO (in charge of vehicle registration and driver’s licenses) and LTFRB (in charge of franchising of buses, jeepneys and taxis) look to the agency for guidelines and policy statements they are to implement. Meanwhile, LGUs have jurisdiction over paratransit like tricycles and pedicabs. In the case of Manila, these paratransit also include the “kuligligs,”  3-wheeler pedicabs that were fitted with engines and have been allowed (franchised?) by the city to provide transport services in many streets. Unfortunately, most LGUs do not have capacity nor capability for transport planning and so are limited or handicapped in the way they deal with transport (and traffic) issues in their jurisdictions. We have always maintained and promoted the stand that the DOTC should extend assistance and expertise to LGUs and the LGUs should also actively seek DOTC’s guidance in matters pertaining to transport. There needs to be constant communication between the national and local entities with cooperation leading to better, more suitable policies being formulated and implemented at the local level.

By d0ctrine in Governance, Policy, Public Transport on July 28, 2013.
← Transport in the State of the Nation Address 2013 Narita arrival →