Emergence of motorcycle taxis in Metro Manila and other cities

Motorcycle taxis operate in many Asian cities. In Southeast Asia, in particular, there are formal and legal motorcycle taxi services in cities like Bangkok and Jakarta. These motorcycle taxis are called “habal-habal” in many parts of the Philippines and are accepted modes of public transport particularly in rural areas where roads are not the same quality as those in urban areas. Motorcycles and motor tricycles are the most preferred modes of transport and their characteristics are usually most suitable for such roads.

In Metro Manila, there are motorcycle taxis operating in many locations including Bonifacio Global City, Eastwood City and White Plains. These are basically discrete operations and providers are low key so as not to attract the attention of authorities. Services though are worst kept secrets considering they have a steady clientele. In Pasig City, and I assume other Metro Manila cities as well, there are ‘formal’ habal-habal terminals. I took a photo of one in a low income residential area that was designated as a relocation site for many informal settlers around the metropolis. 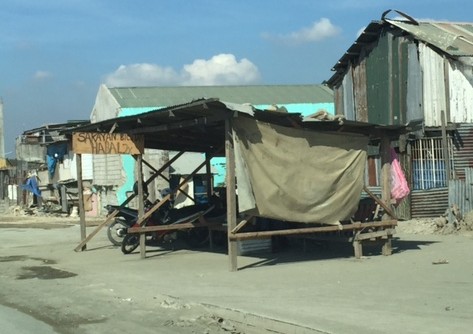 A friend at the Cebu City Traffic Operations Management (CCTO or CITOM) told us that there is a growing number of motorcycle riders offering transport services in their city. These are illegal but are being tolerated in many cases due to the growing demand for their services particularly during unholy hours late at night or in the early morning. I also saw many of these operating in Tacloban and even crossing the San Juanico Bridge to Samar Island from Leyte.

There are also many habal-habal in tourism areas including in island resorts where there is a lack of formal public transport services. This mode is a necessity and so far, there are only rare reports of these vehicles and their riders being involved in road crashes. This is the case despite their being perceived as unsafe modes of transport. I guess they will continue to be popular in rural areas and will quickly become popular should they be mainstreamed in urban areas just like their counterparts in neighboring countries in Southeast Asia. In fact, the demand is already there and just waiting to be tapped given the horrendous traffic jams that will drive people towards modes they think can allow them to escape traffic congestion.