Some observations and thoughts about the EDSA carousel

Much has been written or said about the EDSA Carousel. This is the express bus service the government implemented along Metro Manila’s busiest thoroughfare, EDSA or Circumferential Road 4. I feel that it is a decent effort from government to address the lack of supply to address the huge demand for public transport along EDSA considering that it serves to also distribute trips collected from major roads connecting to it. Is it an admission of something wrong in terms of the transport infrastructure along EDSA? Perhaps and from the current administration and DOTr. The admission of flaws certainly did not or will not come from the previous administrations that failed to address problems pertaining to Line 3 including maintenance and operations issues.

Buses queued before the Trinoma/North Avenue Station of the carousel. Overhead is the junction to the EDSA-MRT depot underneath Trinoma. 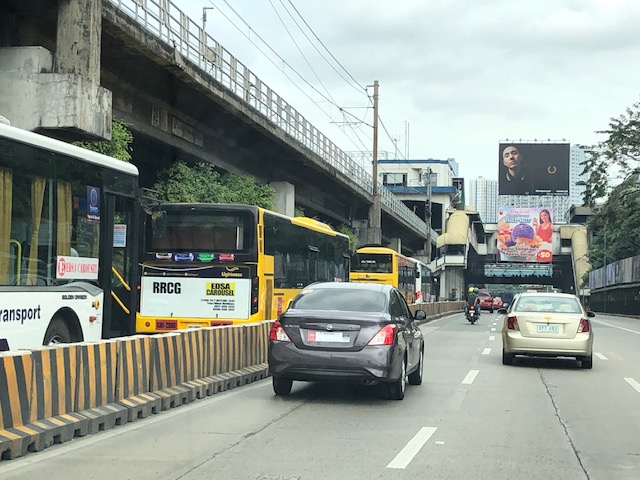 The carousel stations are basically part of the MRT station with the platform located at ground level at the otherwise underutilized space that is the median island of EDSA. Access to the express buses are via the MRT stations as there are no other means for crossing to/from the carousel berths.

The carousel is an attempt to have a Bus Rapid Transit (BRT) along EDSA. It is perhaps the most practical solution to supplementing the already limited capacity of elevated Line 3 despite the continued operations of regular buses. The express bus service is not a new idea along EDSA since Line 3 had to compete with a BRT proposal (though it didn’t use the term BRT then) back in the 1990s. Insiders at NEDA relate that it was then President Fidel V. Ramos himself who allegedly ‘lobbied’ for the MRT instead of an elevated bus transit system. Unfortunately, the MRT proposed, constructed and now in operation is a light rail system like Line 1 and could not easily be upgraded to a heavy rail system like Line 2 or the future Line 7. The line is already problematic due to maintenance issues and the aging rolling stock. And there are questions regarding interoperability with Line 1 (definitely not interoperable with Line 7). So the grand central station currently under construction will really be a terminus for 3 lines as trains will not be able to pass through to other lines like how it is in other countries.

Will the carousel be a permanent fixture along EDSA? Perhaps. But it should be improved further for the convenience of commuters as well as for more efficient operations. The current buses being used are the not the right vehicles if capacity is to be maximized. Articulated buses would be necessary for this purpose. The current barriers should also be replaced with more appropriate and perhaps more clever designs partly for aesthetics but for the system to be safer and more functional in terms of spaces for passengers and vehicles.

By d0ctrine in BRT, Bus, Public Transport, Terminals, Transport Planning on April 1, 2021.
← On the importance of trees along streets On the principles of good infrastructure →