Traveling to and from the Bicol region back in 2009, I tried to trace the PNR’s Main Line South railway tracks that passed through the provinces of Quezon and Camarines Sur. Following are a few snapshots while traveling on-board our trusty Pajero. I don’t remember the towns where I took the photos mainly because I didn’t keep tabs about the info. However, I’m sure these can be retraced and recorded in another, future trip to Bicol. I hope readers don’t mind the reflections in some of the photos due mainly to our vehicle’s window tint. 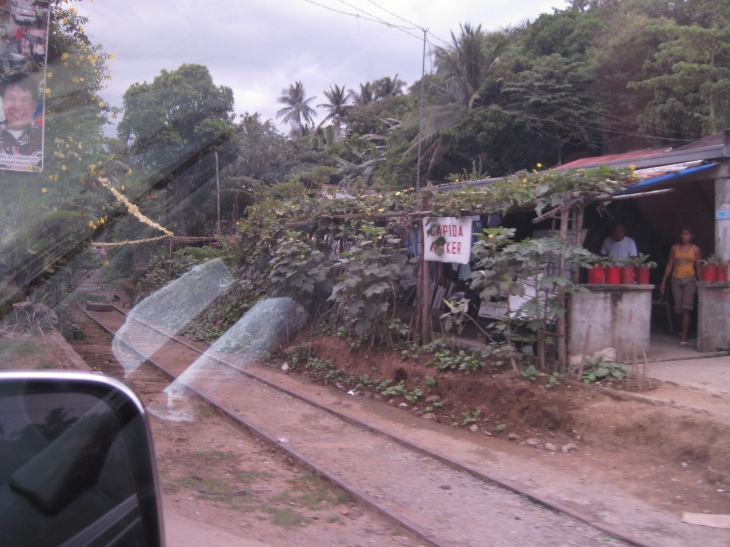 Railway tracks along a barrio in Quezon – while the rails are there, it seems many of the ties (sleepers) are either missing or already covered in soil. Note the houses that have encroached on the PNR ROW? They are well within the 30 meter ROW of the PNR tracks and will surely be affected should there be capacity expansion (read: double tracks) in the future. 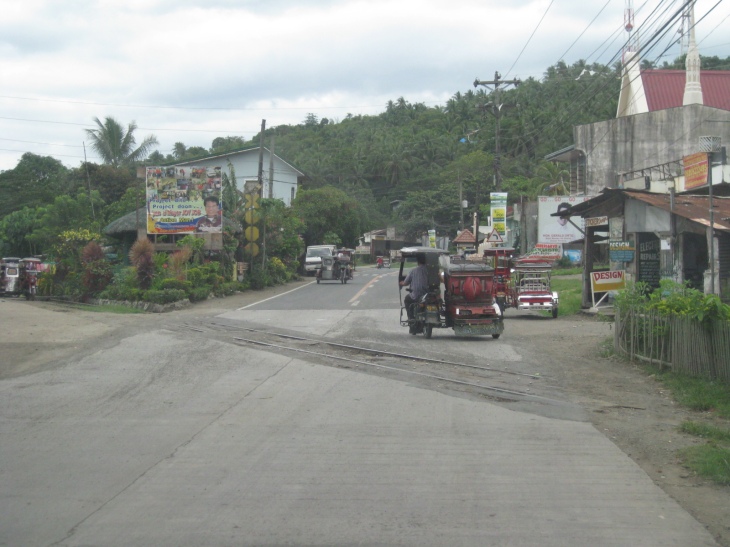 Tracks embedded on the national highway – while the old signs are still present in some junctions with roads, most are either unreadable because of wear or hidden among the posts and flora. These, too, need upgrading and should already include traffic signals and barriers to warn road traffic of an approaching train. 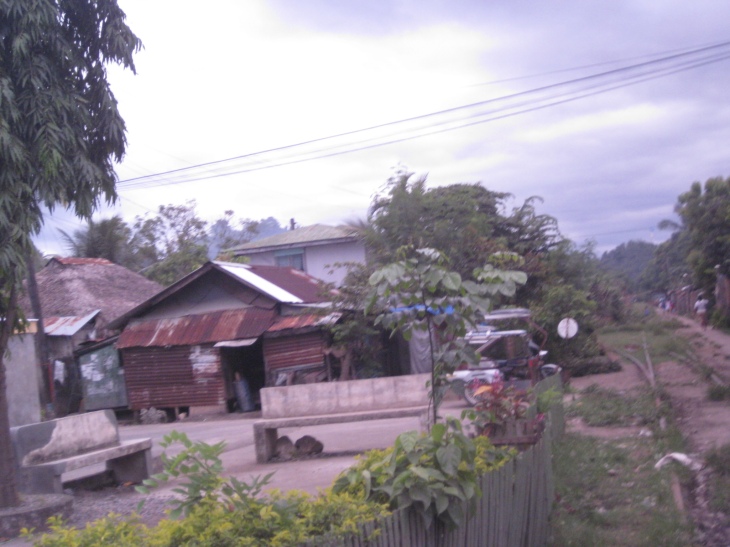 The switch assembly on the right indicates diverging tracks probably in the vicinity of a station somewhere downstream from where I hurriedly took a photo. 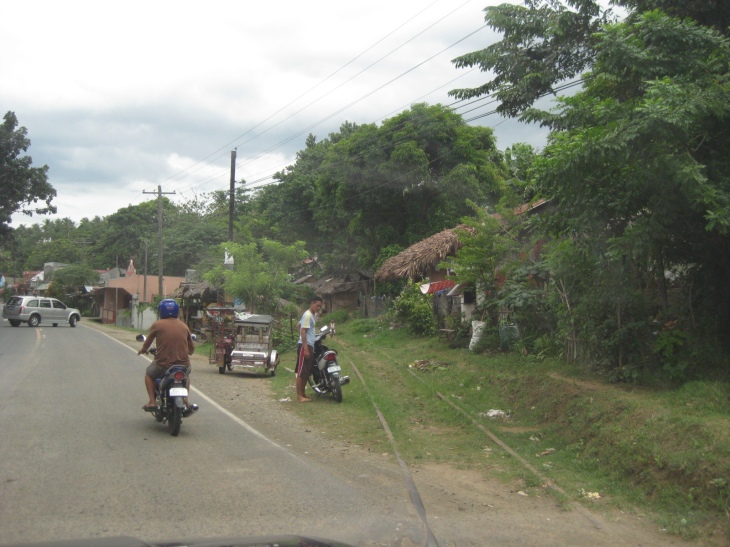 Railway tracks seemingly diverging from the highway – in this case, the photo strongly suggests the absence of ties to hold the tracks and prevent derailment. Much of what’s left of both MLS and MLN are in this condition and in the case of MLS requires intense rehabilitation to ensure the safety of travel. I can only imagine how trains should slow down during the wet season when the soil turns to mud in many sections. 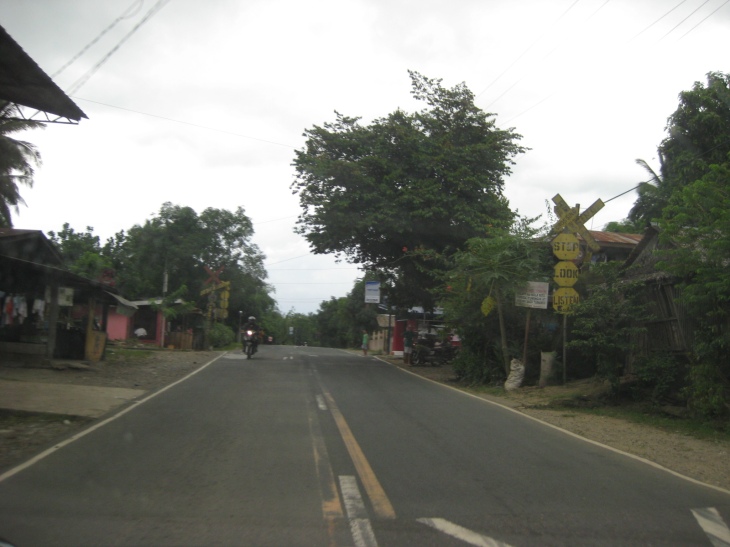 The signs are not so noticeable especially when motorists are driving quite fast along roads with very good pavements. I don’t think the railway signs comply with current standards of reflectivity and are already partly hidden from effective view by the trees and structures along the roadside. The tracks just ahead and crossing the highway are almost hidden due to the highway pavement. Asphalt overlays may tend to cover rails that are embedded on the highway.

My first look at the motorized trolleys of Quezon – this photo shows what seems to be a terminal for two type of paratransit: the road-based tricycle (left) and the rail-based trolley (right). Being a convergence point for passengers, there are stores and eateries in the area. Note again the condition of the tracks where the wooden ties are still visible.

The photo above is my last snapshot of the railways prior to us using the bypass road on our way to Naga City. We also encountered heavy rains that prevented me from taking more photos during our drive. Thus, I was only able to take some more snapshots when we were already in Naga City.

Rail crossing in Naga City – the signs again are obscured by other structures along the road. There are practically no safety devices at the time that could prevent crashes involving trains. Of course, at the time, the train service to Bicol were still suspended so there were none that could have had conflicts with road-based traffic. 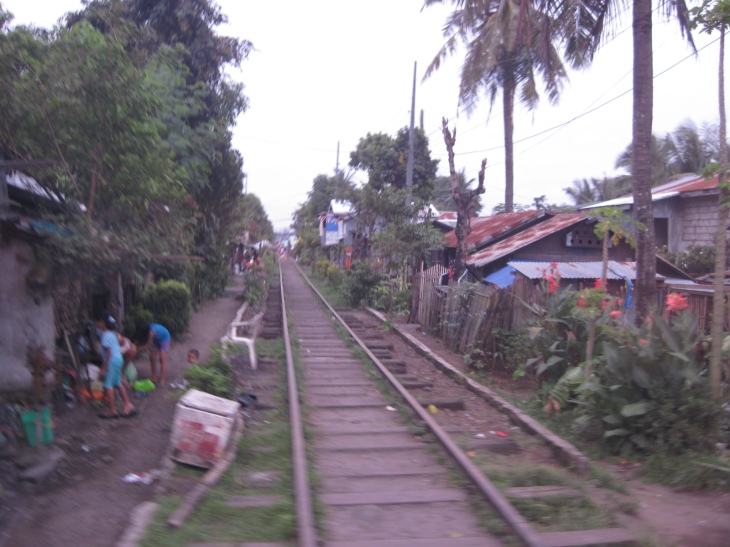 Railway tracks in Naga City – the tracks here seem to be in good condition despite the suspension of train services at the time. Noticeable too is the fact that while there is clearly encroachment on the PNR ROW, the houses have at least some space between them and the tracks unlike the case of Manila. Note that in the Bicol region, the PNR uses a single track rather than a double track system. Future capacity expansion (and I’m crossing my fingers here) would require a double track system to permit increased two way traffic once the trains regain popularity.

Next: the trolleys of Naga City

By d0ctrine in Infrastructure, Railways on October 25, 2011.
← Conflicting flows – driver and rider behavior in the vicinity of flyovers EST and Green Urbanism →