Conflicting flows – driver and rider behavior in the vicinity of flyovers

Typical issues concerning traffic flow along sections approaching or departing from the ramps of vehicular overpasses or flyovers include weaving. Simple observations will reveal that a significant number of vehicles, regardless of whether private or public, passenger or freight, big or small, have a propensity to change lanes before and after a flyover. Such weaving behavior is a consequence of driving behavior in this country where many drivers and riders often are unmindful of planning their trips as well as the proper positioning of their vehicles while using the road. Many drivers and riders seem intent only in bypassing points of congestion and do not have any respect at all for the rights of other road users as well as for the rule of law along highways and streets. 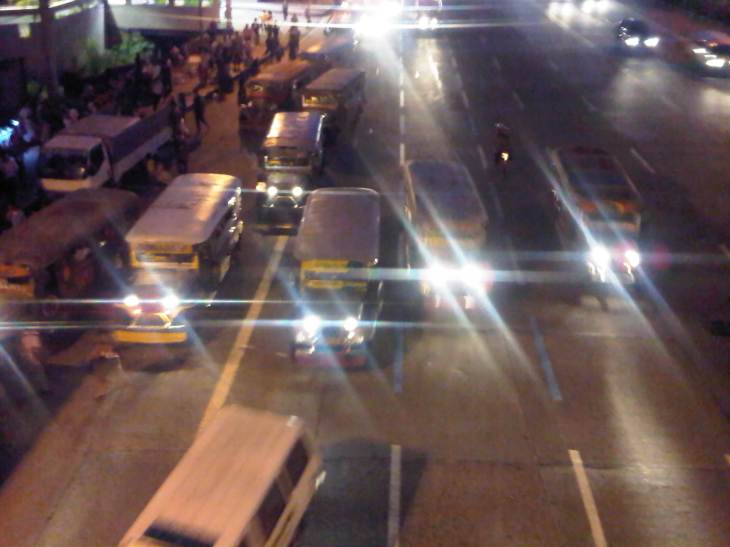 Jeepneys occupying five (5) northbound lanes of Commonwealth Avenue, including the lane designated for motorcycles (delineated by the blue lines) – Most public utility vehicle drivers in the Philippines seem to abhor queuing and the prevailing practice is for most of them to try to bypass others by encroaching along the middle lanes. Instead of a First In First Out (FIFO) discipline that is desirable for conventional public transport operations, its more like a Last In First Out (LIFO) state along loading/unloading areas. 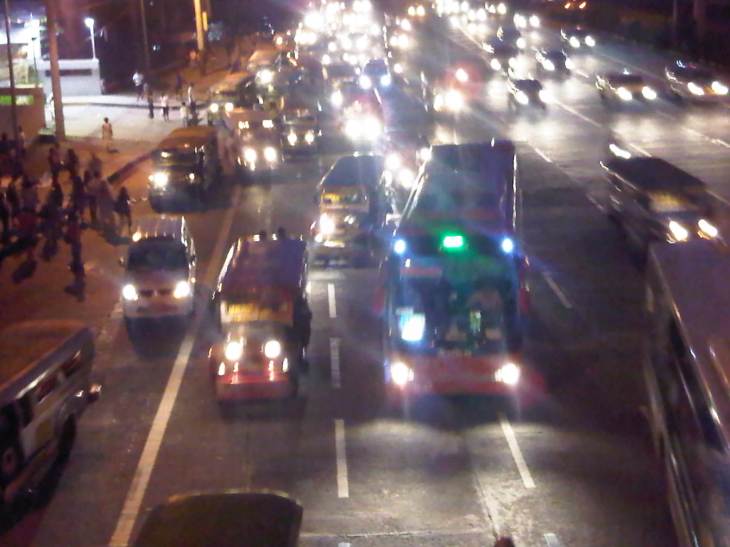 Buses joining the fray of vehicles in the same area – Note that practically 4 to 5 lanes of Commonwealth are occupied by buses, jeepneys and AUVs, effectively blocking motorcycles from using the lane designated for them. Such behavior in the vicinity of the foot of the Tandang Sora flyover also influences private vehicles to shift towards the inner lanes of the highway and unto the path of vehicles descending the flyover.

Motorcycles (they with the single headlights) using the 5th and 6th lanes of Commonwealth – riders have no choice in this situation where PUVs have occupied the motorcycle lane and behave as if they are the the only road users in the area. PUVs are observed as generally oblivious of the fact that road space is to be shared and basic courtesy is a requirement for smooth and safe flow to occur.

As the traffic flow decreases, partly due to the control imposed by the traffic signal upstream at the Tandang Sora intersection, lanes become less congested – motorcycles are then able to return to their designated lane.

The chaotic situation shown in the photos could have been prevented or corrected if enforcers were in the area to manage traffic. There were none in the area, and I only found a few of them a couple of hundred meters downstream apprehending riders where traffic is already free-flowing. I thought perhaps that instead of focusing on apprehending riders, these enforcers were better off trying to address the mess upstream of their position. It is always both frustrating and disappointing to see enforcers diligently doing their jobs in the wrong locations along our highways. And all too often, the drivers and riders they apprehend are not the ones guilty of constricting traffic or posing dangers upon other motorists.