Home » Highways and Streets » Another look at Imelda Avenue traffic

Another look at Imelda Avenue traffic

A reader brought to my attention some traffic problems encountered along a section of Imelda Avenue in the vicinity of a major retail chain’s branch. There are experiences of traffic congestion along the section fronting the SM Hypermarket from across the Village East subdivision. However, the commercial development and the traffic generated is not really new since the hypermarket replaced another similar establishment (Makro). Arguably though, the trip generation rates of SM developments can be higher than their competitors considering their branding and customer preferences based on traffic experience around SM malls. Following are some specific observations and comments for the case of Imelda Ave. in the vicinity of the SM Hypermarket along the highway.

Slow-moving traffic in front of the SM Hypermarket along Imelda Avenue in Cainta, Rizal

Congestion in the previous photo turned out to be caused by jeepneys loading and unloading passengers in front of the commercial development. Jeepneys tend to occupy the outer lane of the highway, significantly reducing road capacity thereby causing a bottleneck leading to congestion propagating upstream. There is actually a loading/unloading bay on the Hypermarket side of the road but jeepneys do not use this and almost always stop in the middle of the road. 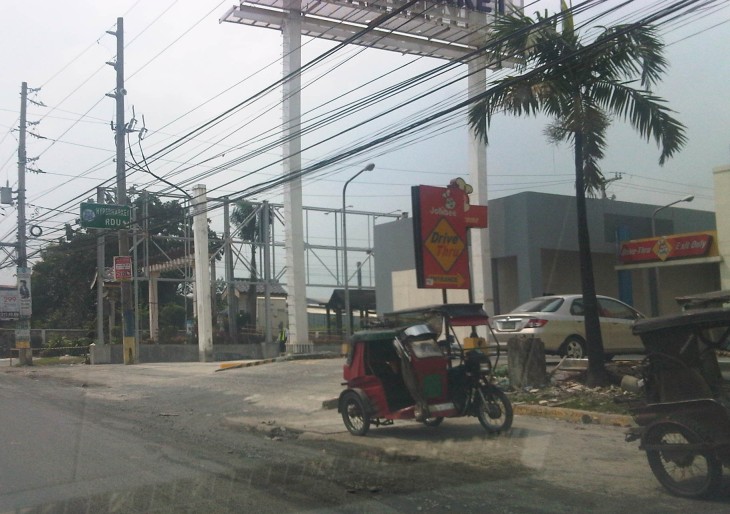 There are also tricycles using Imelda Ave. despite the regulations prohibiting them from national roads. The tricycles serve the residential subdivisions along the highway but used to be the main mode of transport along an unfinished Imelda Ave. from the 1970’s and competed directly with the jeepneys from the 1980’s one the connection between Ortigas Ave. and Marcos Highway had been made, leading to the opening of new jeepney routes through Imelda Avenue.

The bottleneck for this section is along both directions as jeepneys stop not only for the Hypermarket but also for the residential subdivision (Village East) that is located just across from SM. The gate of the village opens toward SM with traffic generated significant enough to create a 3-leg intersection at the subdivision access/egress. This is an unsignalized intersection that has no enforcer to manage traffic, leaving it up to the motorists to determine acceptable gaps for conflicting movements. Compounding the situation are pedestrians crossing just about anywhere along the road like the people shown in the photo above.

The issues mentioned above are not all unique to the location but are often the case for many other places where there are major traffic generators such as malls, supermarkets and even residential developments. In fact, middle class villages are major traffic generators due to the car ownership but they are usually predictable in terms of peak periods. That is, the morning and afternoon/evening peak are well-defined according to office or school hours associated with residents (i.e., “to school,” “to work,” and “to home” trips). The solution, of course, is quite basic though not so simple – traffic management in the form of personnel who will enforce traffic and manage intersection flow. It is basic because it is a solution that’s definitely “in the box” and traditional or conventional. It is not simple because often, there is a lack of qualified personnel who can manage traffic full-time, and competent to firmly enforce traffic rules and regulations in order to effect behavioral change (for the better) among motorists and pedestrians. Granted, the commercial development should take the initiative to manage traffic and these may be recommendations already made when a traffic/transport impact assessment was conducted prior to the construction of the Hypermarket. Such assessments should have included traffic forecasting (estimating future traffic) in order to determine potential traffic congestion in the area and the formulation of site specific and appropriate mitigation measures. Perhaps there is a document somewhere (EMB?) that Cainta may use as a guide for how to address transport and traffic problems in the area due to the presence of the supermarket. If none, then the burden will be on the local government to study the traffic and come up with a strategy on how to lessen the detrimental traffic impacts of development in the area.

By d0ctrine in Highways and Streets, Traffic Management, Trip Generation on October 29, 2012.
← Araneta bus terminal CLRV: another look at the LPG Jeepney →