Home » Pedestrian » The inconvenience of pedestrians

The inconvenience of pedestrians

Walking is our most basic mode of transport and yet it seems that we have failed to design facilities that would make us walk more conveniently and comfortably. Many Philippine cities have been developing their transport systems that favor road transport and motorized vehicles while generally neglecting the needs of pedestrians. Metro Manila cities have been quite inconsistent in the way they deal with the needs of pedestrians (i.e., walking) and often pass on the blame to the DPWH. While that agency also is definitely responsible with a lot of issues pertaining to suitable designs of transport infrastructure, I think LGUs should also be responsible and take up the challenges with respect to design of people friendly facilities. There are a lot more local roads than the national roads under the DPWH. And so LGUs, especially the more developed cities have a bigger role in developing their transport infrastructure to be more people oriented.

Pedestrians can no longer cross at-grade at the intersection of Quezon Avenue and Araneta Avenue. Note the vendor in the photo (with umbrella) crossing counter-flow with his pedicab full of plastic merchandise. The cyclists in the photo are risking their lives and limbs in crossing the intersection.  Fortunately for them, there seems to be no traffic enforcers around to apprehend them. The “yellow box” has been replaced by a “red box” in many intersections including this one.

The pedestrian overpass at Quezon Ave.-Araneta Ave. as seen from the sidewalk along the Q.C.-bound side of Quezon Ave. The sidewalks are often obstructed by vendors but fortunately the overpass itself is not clogged by vendors unlike other overpasses. 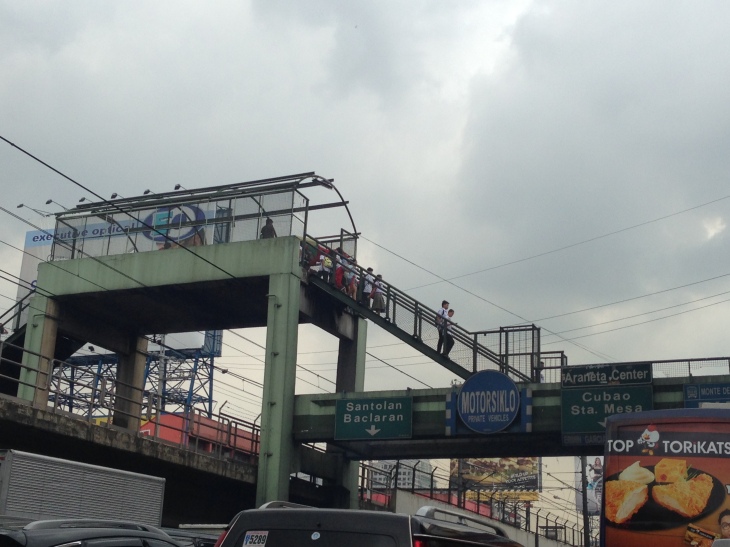 This overpass along EDSA is the outcome of pedestrian crossings being only an afterthought (some would say aftermath) of the EDSA MRT design. It is an example of the “pwede na yan” (this will do) attitude of many engineers and architects when it comes to transport systems.

All of the above examples are found in Quezon City. That city is among the most wealthy cities in the country and there have been a lot of transport-related developments in the past few years that are more people oriented. These include the construction of sidewalks, overpasses and underpasses outside those typically under the MMDA. However, there are still a lot to build and may I say correct in order to promote walking and other non-motorized transport in the city. Quezon City and other cities can be walkable cities and walkability should not be limited to CBDs that are often (and again) passed on to the private sector for development. LGUs should not be too dependent on what the private sector can offer in terms of infrastructure for walking and cycling. There are not many responsible private companies out there who would commit resources towards walkable and cycling-friendly developments. Often they are tempted to maximize space for buildings, even sacrificing space for parking and motor vehicles, and ultimately at the expense of the general public. This is where LGUs, and not even national government, comes in to put things into order. However, the caveat here is that LGUs should have a plan to guide them in development and again, there are few LGUs that have this capability and capacity to plan and implement such plans. And here is where national agencies like the DOTC and the DPWH can provide help to LGUs given their resources and expertise.