Home » NMT » Park and ride near the Line 2 Santolan Station?

Park and ride near the Line 2 Santolan Station?

These days when there are heavy rains and the threat of flooding, the Marikina river and its riverbanks come to mind. In the Santolan area, where a former Mayor of Marikina has invested a lot in developing a bus terminal, he seems to be stretching it in terms of trying to make the area a major intermodal terminal and maximising utility of the land. The latest venture is described by the sign below: 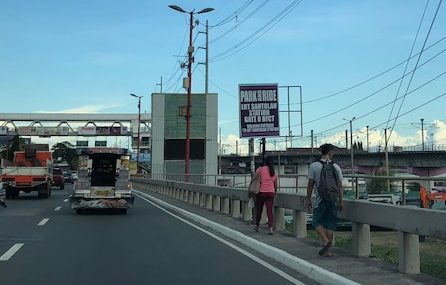 A closer look at the sign shows what’s written at the lower part. That is, that the parking spaces are “walking distance” from the Line 2 Santolan Station. I’m not sure if they measured the actual walking distance and what it would take to walk that distance between this parking area for the “park and ride” and the Line 2 Santolan Station. A quick measurement using Google Maps indicate that the distance between these two are more than 400m, and this is not an ‘easy’ walk considering that you would have to ascend from or descend to the riverbanks level and there is no shelter from the elements for what would be regular walks if one is to commit to this “park and ride” arrangement. If I were to walk such a distance, then I would likely choose to park at the mall and use the long footbridge connecting it to the station.

I still maintain that the best location for a “park and ride” would be one near the station similar to the Trinoma mall parking lot being practically adjacent to the Line 3 North EDSA station. And that is what LGUs, the railway authorities or the private sector should look into for projects like the Line 2 Extension and Line 7. The area around the future Line 2 Masinag Station presents a lot of possibilities in terms of parking facilities including perhaps a redevelopment of the existing SM City Masinag to be integrated with the station. As for Line 7, the areas around another SM City (Fairview) also presents opportunities for “park and ride” facilities.

By d0ctrine in NMT, Parking, Pedestrian, Walking on June 14, 2018.
← PNR San Fernando, Pampanga A compilation of studies on walkability in the Philippines →