I have written about the common causes of congestion along Ortigas Avenue. The past articles mentioned the undisciplined loading and unloading along the entire stretch of the road and particularly at either ends of the Manggahan Floodway bridge in Pasig City. I have also written about the congestion caused by private vehicles generated by a private school just a stone’ throw away from DOTC headquarters. This time, I focus on Ortigas Avenue Extension, particularly the stretch from Cainta Junction to Valley Golf.

The current and more critical choke points along Ortigas Ave. Ext. are along the stretch of the road between Cainta Junction and Valley Golf. These are due to the road and drainage works along that section that effectively made the westbound side of Ortigas a single lane road between Brookside and Park Place. There are also road and drainage works along the eastbound side between Brookside and Valley Golf where the entire road section is being elevated. This section is flood prone and has been problematic during the wet season when heavy rains often result in flash floods.

Counter flow along Ortigas Avenue Extension – this scheme has been the only option for the section between Valley Golf and Park Place Subdivision as the work proceeds one lane at a time. At the time, I took this photo, the counter flow lanes allowed for 2 lanes each for both the eastbound and westbound directions of this corridor. The past week, however, I noticed that during the afternoons and evenings, I noticed that two lanes were allocated for westbound traffic while only one was for the eastbound direction. This should not be the case as the peak direction in the afternoon to the evening is eastbound when people are home bound mainly from work and school.

The section across from STI is another choke point as the area is one of the ends of the project raising the elevation of the avenue as well as improving the drainage along the road. The traffic along this area has improved much though vehicles still have to slow down to transition between the old pavement and new pavement sections, as well as vehicles turning towards Hunters ROTC Road. 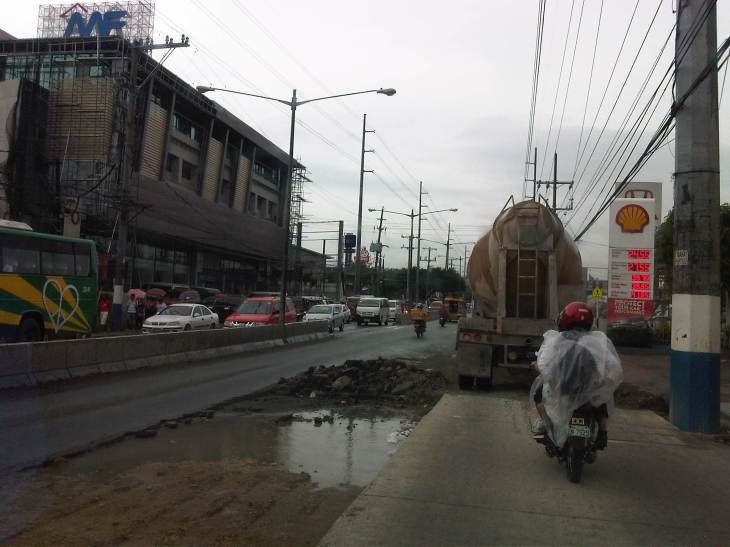 Unfinished sections – at the time this photo was taken, work along the site was intermittent. Commuters making the observation are often frustrated and much disappointed when they see none working along the construction site. The Mayor of Cainta did very well by talking to the contractor and apparently discussing with the latter how to improve traffic conditions as well as how to expedite the implementation of the project. My own observation was that conditions did indeed improve after that meeting (which was related by the Mayor in his Facebook page) and people could see workers busy with the project even at night time.

Traffic will continue to be bad along Ortigas Avenue Extension until this project is completed. While there should be some significant improvement in traffic flow after completion, congestion will again steadily worsen for this corridor whose private vehicle traffic continues to grow. Public transport is provided by buses, jeepneys and UV Express (whose numbers have ballooned during the last 5 years) and these have contributed a lot to congestion because of their drivers’ behavior particularly when they stop for passengers at areas like Valley Golf, Brookside, Cainta Junction, Ever, Countryside, Manggahan and Rosario.

There is hope though as news proclaim that the NEDA Board has approved the LRT 4 project along this corridor. A mass transit system is indeed necessary and this was required perhaps over a decade ago already. I do hope that this ‘LRT’ is more like the current Line 2 trains and stations than the Line 3 kind. Line 2 is a heavy rail system while Line 3 is light rail. The Ortigas corridor requires a heavy rail system considering the passenger demand in the areas that will be served by the transit system. I also hope that Line 4 is implemented like Line 2 with the government taking responsibility for constructing the system. I have maintained my view that the current administration is too fixated with Public Private Partnerships (PPP) that it had practically given up its responsibility to the general public to provide an efficient and equitable means of public transport for commuting. I just now wonder what became of the proposed BRT line along this same corridor. Perhaps the BRT option has already been abandoned by the DOTC in favor of rail?